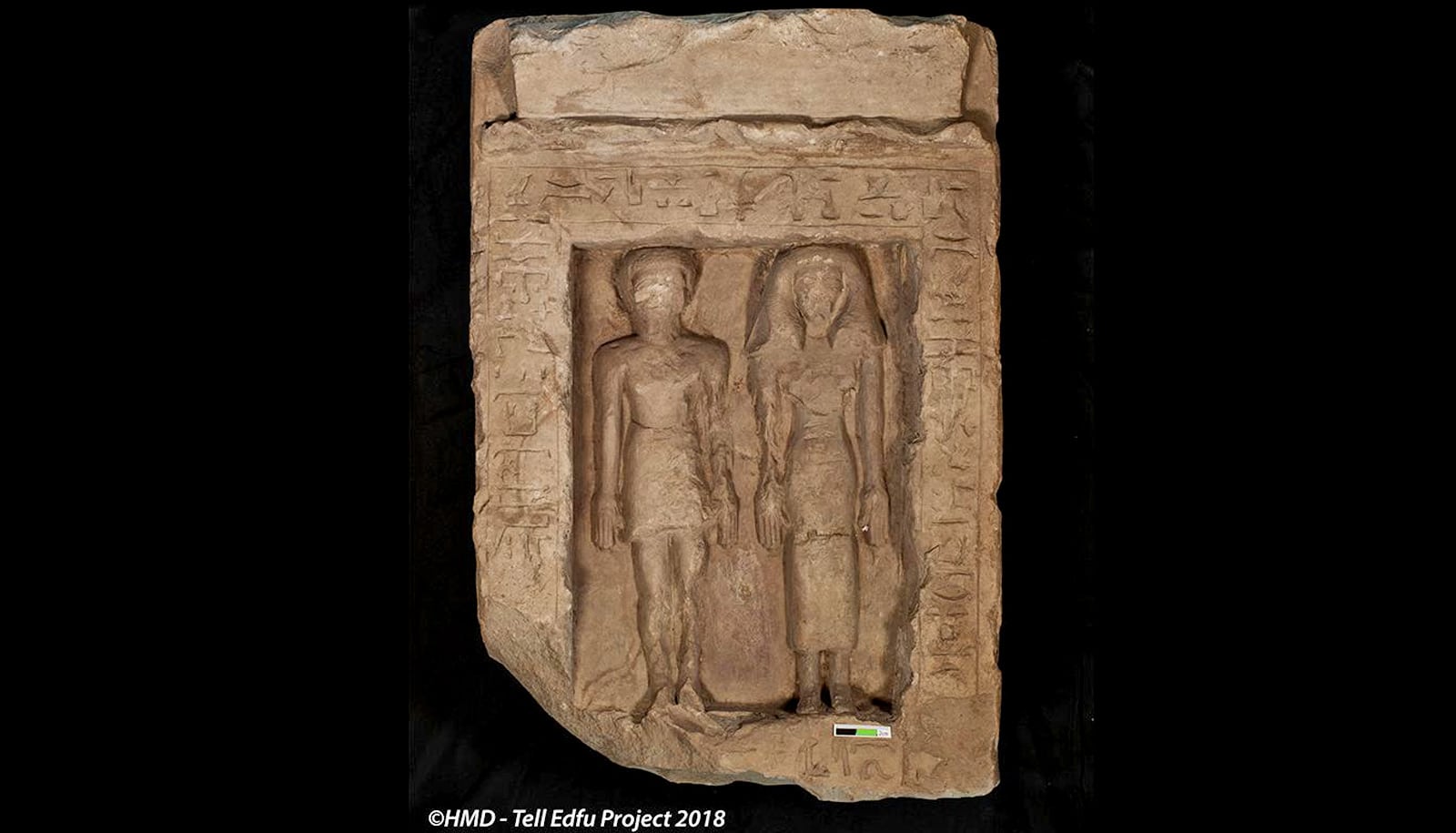 Limestone stela showing a man and woman standing next to each other. Their faces and names show signs of deliberate damage inflicted in ancient times, making it difficult to read their names. (Credit: © GM - Tell Edfu Project 2018) 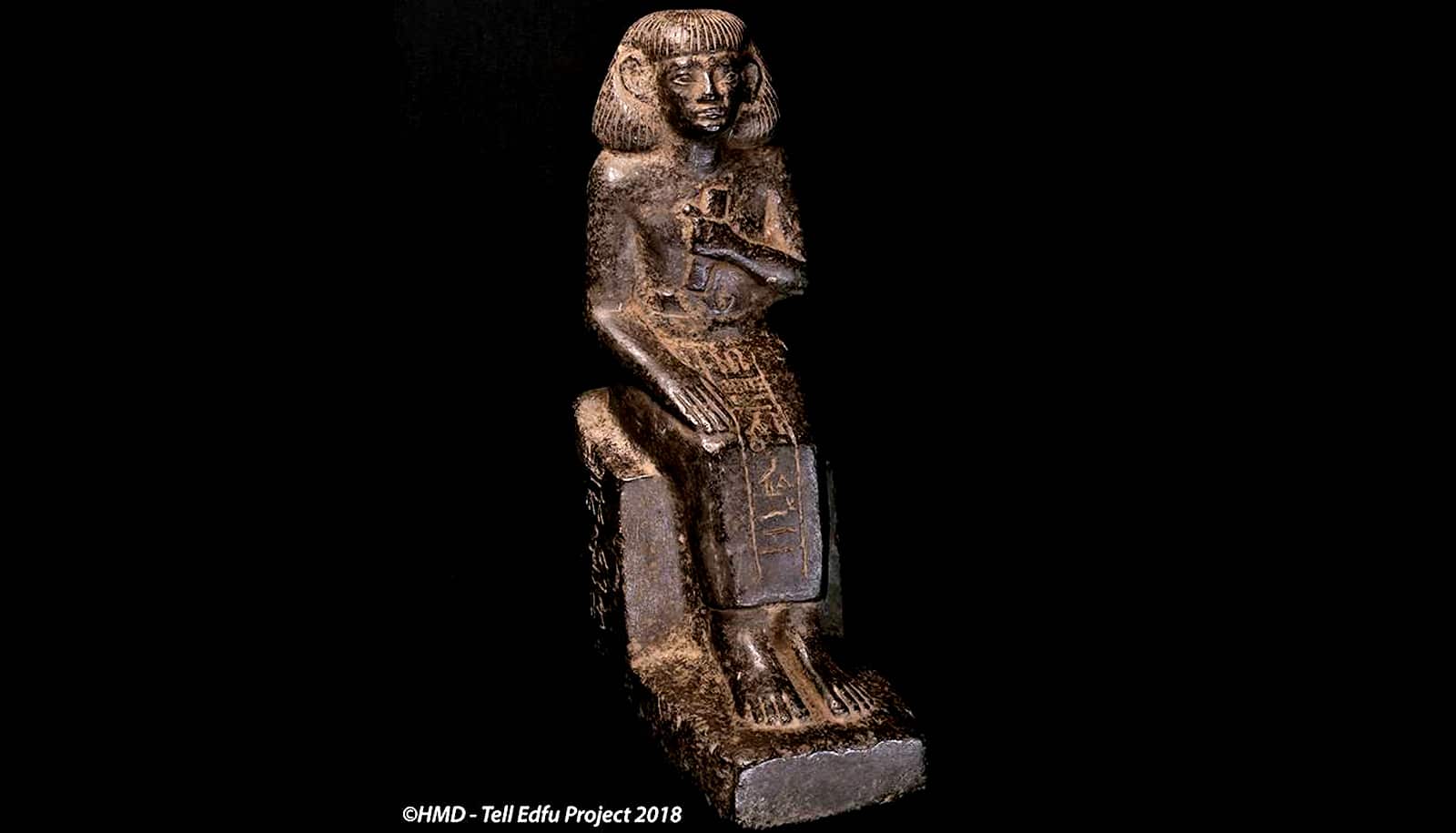 Statuette of the seated scribe of the province of Edfu. (Credit: © GM - Tell Edfu Project 2018)

The column area under excavation (left) and the sandstone column inscribed with the name of the high priest of the temple of Horus, Amenmose (right). (Credit: © GM - Tell Edfu Project 2018) 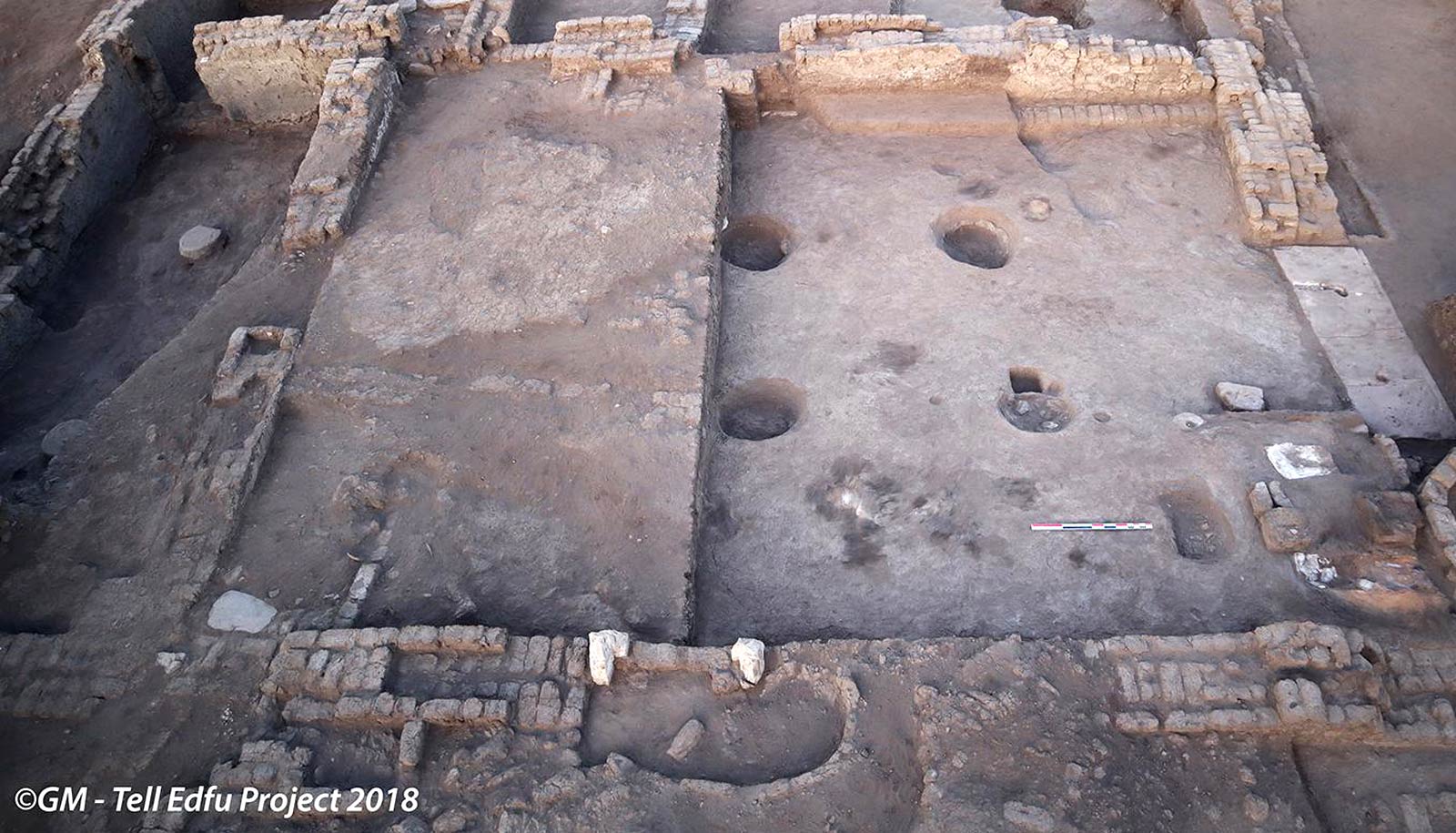 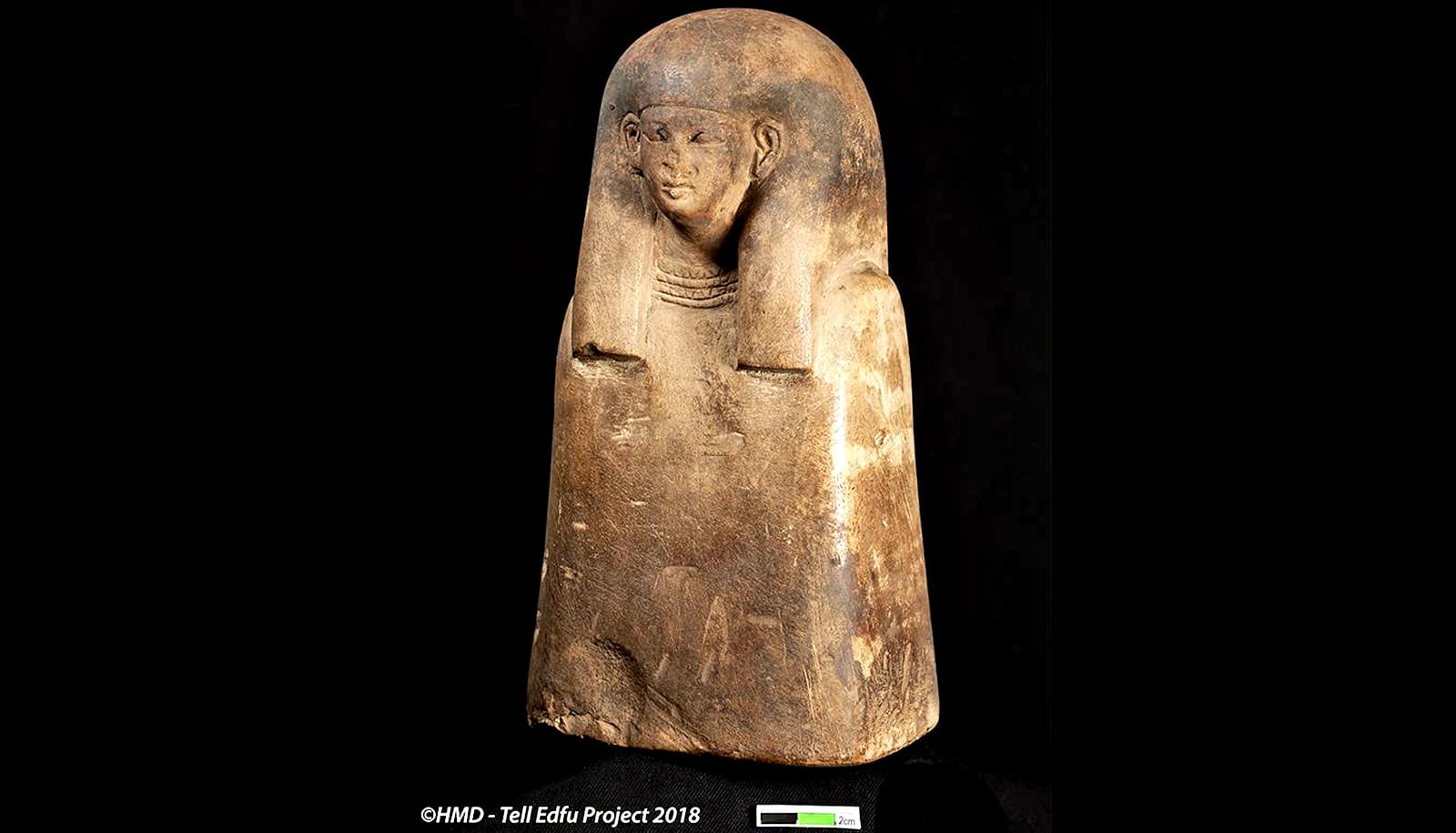 Scientists have discovered a large urban villa dating back to the early New Kingdom, about 1500-1450 BCE, in southern Egypt.

The findings at the site of Tell Edfu include a large hall containing a rare and well-preserved example of a domestic shrine dedicated to family ancestors.

“It has been more than 80 years since such a shrine for the ancestors was discovered in Egypt, and the ones we did have were rarely within an undisturbed context,” says Nadine Moeller, associate professor of Egyptian archaeology at the University of Chicago, who leads the excavation with research associate Gregory Marouard of the Oriental Institute.

Located about 400 miles south of Cairo in the Nile Valley, the ancient city of Tell Edfu was a provincial capital occupied for nearly 3,000 years. The archaeological fieldwork has excavated settlement remains and monuments from Egypt’s Old Kingdom (ca. 2400 BCE.) all the way to the Ptolemaic period (332-30 BCE).

The latest discovery at the site of Tell Edfu is one of the earliest examples of an ancestral shrine from the New Kingdom, and the first archaeological example discovered in many decades, the researchers say.

The excavation, complete in December 2018, focused on a large urban villa of about 440 square yards, which dates from the beginning of the 18th dynasty of Egypt. The building has several rooms with columns. The largest, a six-columned hall measuring about 33 by 26 feet, contains a well-preserved domestic sanctuary dedicated to the cult of the family ancestors of the inhabitants.

The shrine is located in a corner of the main room, and traces indicate a wooden structure surrounded it. It includes a small fireplace and offering table, two small pedestals in mudbrick, several complete or fragmented stelae (upright inscribed slabs of stone or wood), a rare example of a bust of a female ancestor, and a statuette of a seated scribe.

“So far, our example from Tell Edfu is one of the oldest known for the New Kingdom period.”

The limestone bust, which contains traces of paint, show a woman wearing a long tripartite wig and a broad necklace called a wesekh collar.

The statuette of the scribe, carved out of hard black diorite, shows a man seated on a chair, wearing a shoulder-length wig and a long tight-fitting kilt clutching a papyrus roll in front of his chest with his left hand. Inscriptions suggest it’s Juf, a high-level Edfu administrator.

Nearby was also what Moeller describes as a “small but significant” limestone stela, which shows a man and women standing next to each other in raised relief in the center. Though the hieroglyphic text surrounding the couple mentions the common offering formula and includes the names and titles of the two figures, their faces and names show signs of deliberate damage inflicted in ancient times, making it difficult to read their names.

“Currently our best knowledge about such cultic installations within a domestic house comes from the famous workmen village of Deir el-Medineh, near Luxor, dating to the much later Ramesside period. So far, our example from Tell Edfu is one of the oldest known for the New Kingdom period,” Moeller says.

The new findings reinforce the presence of an important high-ranking elite in this specific part of the ancient city of Edfu during the beginning of the 18th Dynasty, a period of political consolidation in Upper Egypt by the Theban kings Ahmose, Amenhotep I, and Thutmose I, Moeller says.

“We are thrilled to find such a complete set of artifacts within their original archaeological context. This should help us answer a lot of questions about the various cultic activities that were carried out at this shrine, in addition to reconstructing the identities of the former owners who lived in this villa.”

Why did this 5th-century child get a ‘vampire burial’?

This ancient Nubian horse got a surprising burial