DUKE (US) — A new biomaterial that changes from a liquid to a gel after injection may stop or reverse the degeneration of spinal discs, researchers say.

The health conditions affect thousands of Americans. To use cell therapies, however, scientists have to keep the cells alive, synthesize the appropriate replacement material, and get it to the right place in a patient’s spine. With newly made biomaterials from Duke University’s Pratt School of Engineering, that goal could be closer.

Disc degeneration is a common problem as people age. Over time, the soft, compressible discs that work as the spine’s shock absorbers break down. Although this intervertebral disc degeneration can occur anywhere along the spine, it mainly happens near the neck and lower back, causing intense pain. Individuals with this condition can also develop herniated discs, osteoarthritis, or spinal narrowing, known as spinal stenosis. 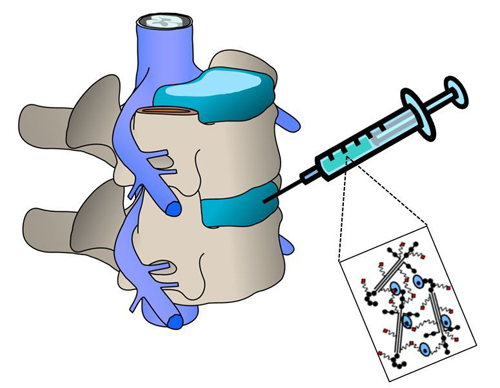 In the new approach, therapeutic cells are delivered to degenerated intervertebral discs within a biomaterial carrier that keeps them from leaking out of place. (Credit: Aubrey Francisco)

Previous lab research has shown that re-implanting NP cells, or even stem cells, can delay disc degeneration. Several companies already offer cell delivery strategies, but the methods are poor and ineffective. “They allow the cells to quickly migrate out of and away from the injection site,” Francisco says.

The team’s delivery strategy keeps the cells in place and provides cues that mimic laminin, a protein in native nucleus pulposus tissue. Laminin is normally found in juvenile but not degenerated discs and allows injected cells to attach and remain in place with the delivered biomaterial.

Laminin may also enable the cells to survive longer and produce more of the appropriate extracellular matrix or structural underpinning of the discs that help stop degeneration, Setton says.

The researchers developed a gel mix designed to reintroduce NP cells to the intervertebral disc (IVD) site. The gel mixes together three omponents: the protein laminin-111 that has been chemically modified and two polyethylene glycol (PEG) hydrogels that can attach to the modified laminin. Separately, these substances remain in a liquid state. The gel, however, holds the cells in place upon injection.

The researchers worked with postdoctoral scholar Robby Bowles to tag NP cells with the bioluminescent marker luciferase and track their location. They then injected the gel into rats’ tails just as a surgeon would deliver cells to a patient. After puncturing the tail’s thin outer layer, they held the needle in place for one minute, delivered the injection to the rat’s IVD site, and closed the injection spot. The solution began to solidify after five minutes and was completely set at 20 minutes.

Images of the luciferase biomarker showed that more than 14 days after injection significantly more cells remained in place when delivered within the biomaterial carrier compared to cells delivered in a liquid suspension. Francisco explains that using the currently available cellular delivery strategies, 100 percent of the injected NP cells leak out of an IVD site within three to four days after injection.

The results, although preliminary, could have a positive impact on the future of cell therapy, Setton says. More work, however, is still needed to optimize equipment and models that deliver cells to a larger IVD sites closer to human size, the researchers says.

“The concept is that these cells will be promoted to produce matrix that can support tissue regeneration or arrest degeneration,” Setton says. “Additional studies that evaluate disc height or matrix hydration following cell delivery would be important to achieve this goal. There’s definitely interest and certainly real potential there.”

The National Institutes of Health funded the research.

Half of space travelers experience back pain