Digitalis lanata is cultivated for medicine because it makes a cardiac glycoside called digoxin. This compound is toxic in large quantities, but it's prescribed sparingly, in small doses, to treat heart failure and certain heart rhythm abnormalities. (Credit: keepps/Flickr)

Foxglove plants, common in many gardens, are known for the showers of bell-shaped flowers they produce.

“Foxgloves make these powerful compounds, but it takes two years to do so, and they don’t make them in a very large quantity. How can we improve this process?”

Plants belonging to this genus, Digitalis, also harbor a less visible asset, however: Chemicals called cardiac glycosides, which have been recorded to treat heart failure since the 1780s, says Zhen Wang, assistant professor of biological sciences at the University at Buffalo.

Wang’s research investigates how foxgloves create these medicinal compounds, with an eye toward improving the process. Farming foxgloves is time-consuming and labor-intensive, and Wang hopes to change that.

Specifically, her lab is investigating the chemical processes the plants use to create cardiac glycosides: what steps take place, what genes turn on, and what enzymes deploy.

“The reason why plants make so many natural products with medicinal properties is because they are also fighting diseases,” says Wang. “Plants aren’t like animals. They can’t run away when stresses come, so they cope with this by becoming the most extraordinary chemists on the planet.”

And yet, “How plants synthesize many natural products is largely unknown,” Wang says. “I want to understand how we can harness the power of nature to make the process of producing medicinal compounds more efficient and sustainable. Foxgloves make these powerful compounds, but it takes two years to do so, and they don’t make them in a very large quantity. How can we improve this process?”

Wang’s team recently published a pair of papers detailing the characteristics of cardiac glycosides in two foxglove species: Digitalis purpurea, a showy purple flower found in many gardens; and Digitalis lanata, which is grown for medicinal purposes.

“This kind of study is important because we first have to know the accurate structure of natural compounds before we can explore their medicinal effects,” Wang says. 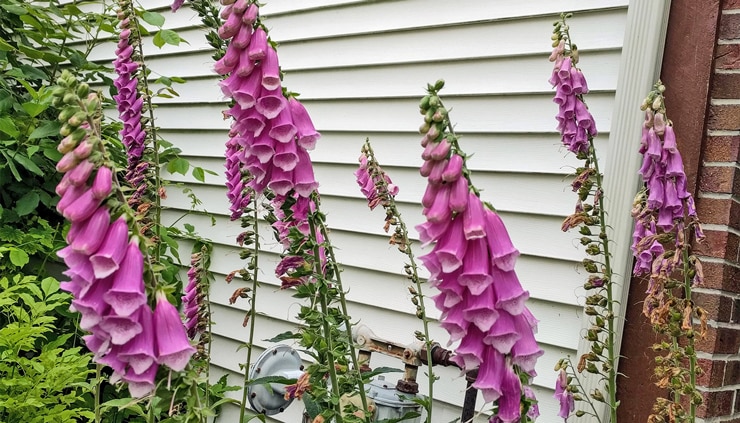 In the first paper, published in the Journal of Chromatography A, the researchers describe methods for assessing the exact mass and structure of cardiac glycosides, and compares compounds found in Digitalis purpurea and Digitalis lanata.

In the second study, published in the journal Data in Brief, they expand on the first, providing additional data on characteristics of cardiac glycosides in both species.

“When we looked at the cardiac glycosides in each of them, we found drastic differences,” Wang says. “In the industrial strain that’s grown for medicine, you see much higher amounts of cardiac glycosides, with much more diversity. I think this just highlights the adaptation of plants and how versatile they are as chemists.”

Digitalis lanata is cultivated for medicine because it makes a cardiac glycoside called digoxin. This compound is toxic in large quantities, but it’s prescribed sparingly, in small doses, to treat heart failure and certain heart rhythm abnormalities.

Current methods for producing digoxin are cumbersome: Because each foxglove plant makes only a little bit of the chemical, farmers must grow the crop in huge quantities, Wang says. That uses up a lot of agricultural land. The wait time is also long.

“It takes two years, from the time you plant the seed to the time the leaves are ready to harvest, and then you have to dry it in the silo,” Wang says. “Then, the plant is crushed into powder, and the compound is extracted and purified using chemical processes.”

If Wang’s team can figure out, step-by-step, how foxgloves make cardiac glycosides, scientists could leverage that information to explore a variety of improvements.

Biologists could engineer fast-growing microbes, such as yeast or harmless strains of bacteria, to produce cardiac glycosides more quickly. Plant scientists could genetically engineer foxgloves to make larger amounts of digoxin, which would increase the efficiency of farms and free up land for other useful crops.

Medicinal chemists could also work to develop new drugs that are similar to digoxin but safer.

“We can learn from nature,” Wang says. “We can study all of the available compounds that are found in the plants and then come up with our own design of compounds that are safer and more effective. That’s why I think it’s important to not just focus on the current drug digoxin, but to expand our focus to all the compounds in the same class, the cardiac glycosides.”