Rates of discrimination against African-Americans in field experiments of hiring did not decline from 1990 to 2015, according to the largest and most comprehensive meta-analysis of its kind.

“It is often suggested that prejudice and discrimination are fading out over time through a gradual process of liberalization of attitudes,” says Lincoln Quillian, senior author of the study and professor of sociology at Northwestern University. “But we found striking stability in discrimination against African- Americans.” 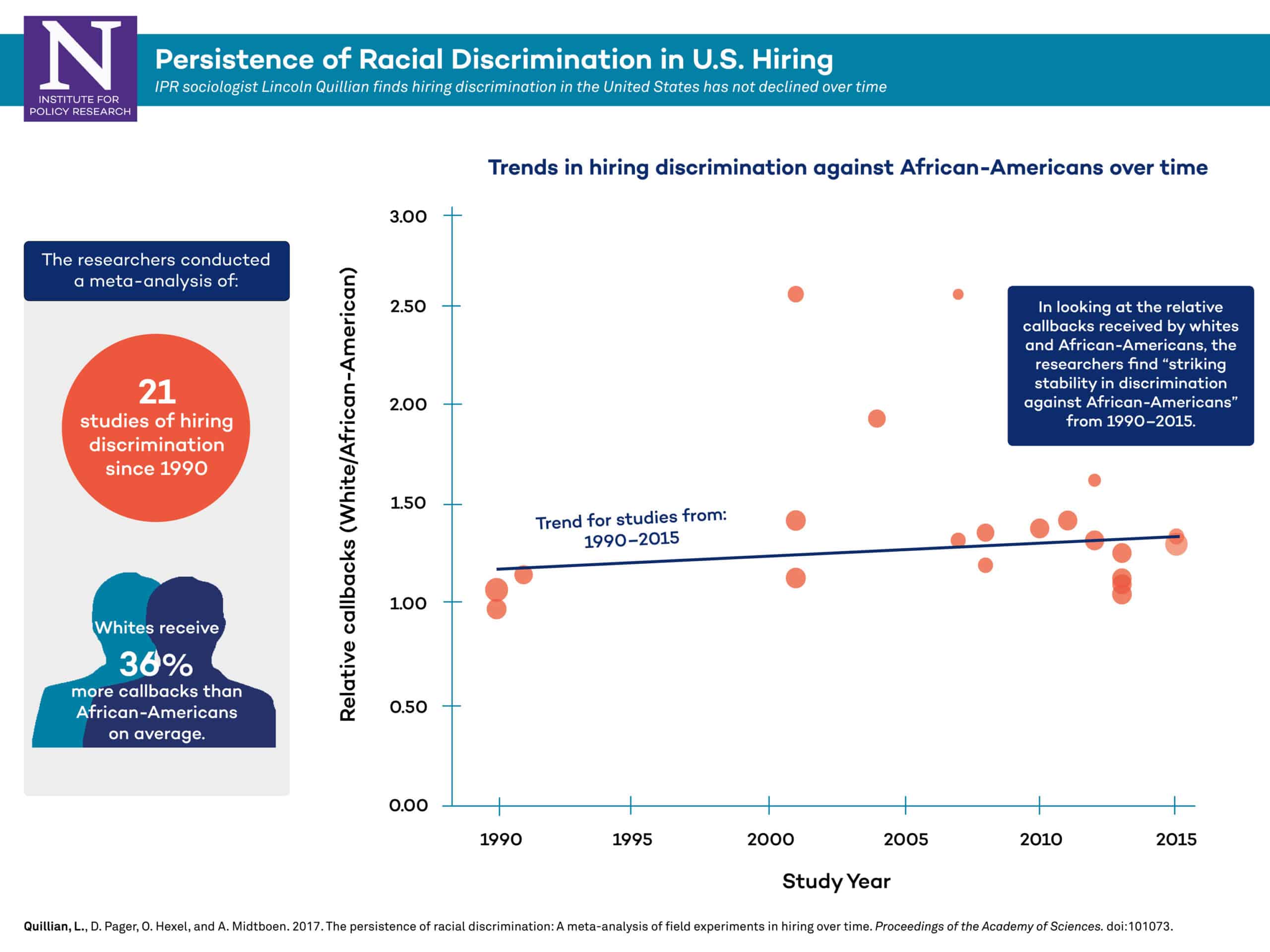 The researchers found some evidence that discrimination declined during this period for Latinos, although the small number of field experiments including Latinos means the trend results are not highly certain.

“The results suggest we need to realize direct discrimination on the basis of race in hiring still exists and is something that the country needs to confront.”

Quillian says the analysis was important to understanding the sources of racial inequality, especially in employment, and to generally understand the changing status of race in American society. They realized that this could be investigated by putting together data from field experiments of hiring discrimination, which provides a much more valid method to assess discrimination than the indirect methods others have used.

He said it was striking and depressing to find a lack of change in rates of hiring discrimination over a 25-year period.

“During this time, the country saw some favorable racial trends, like declining black-white test score gaps, slow declines in racial residential segregation, and the election of the country’s first black president,” says Quillian, a faculty fellow with the university’s Institute for Policy Research. “But whites received on average 36 percent more callbacks to interview than African-Americans with equal job qualifications, and we found no evidence that this level of discrimination had changed.”

Quillian says the support for the principle of equal treatment regardless of race has increased, and explicit prejudice has declined, but other measures of more subtle racial biases had not shown similar change.

“Our results are consistent with the idea that the subtler racial biases are important for hiring discrimination,” Quillian says. “The results suggest we need to realize direct discrimination on the basis of race in hiring still exists and is something that the country needs to confront.”

The results support the need for efforts to enforce anti-discrimination laws and suggest a continued need for compensatory policies like affirmative action in hiring, Quillian says, adding that he and his coauthors are writing other papers based on meta-analyzing discrimination in hiring. One analysis puts the US in international context by comparing rates of hiring discrimination between the US and Europe.

The study appears in the Proceedings of the National Academy of Sciences. In addition to Quillian, coauthors include Devah Pager of Harvard University; Ole Hexel of Northwestern; and Arnfinn Midtboen of the Institute of Social Research in Oslo, Norway.

Hairdressers of color are exposed to dangerous chemical mix