Among an indigenous group of people in the Amazon region of Bolivia, atherosclerosis is practically nonexistent, whereas it’s a common fact of life for most Americans over 60. It’s a complicated comparison, but parasitic worms seem to be part of the equation, say researchers.

“The Tsimane have the lowest reported prevalence of atherosclerosis than any population recorded to date,” says Michael Gurven, professor of anthropology at the University of California, Santa Barbara.

An 80-year-old Tsimane has the same arterial age as an American in his or her mid-50s.

Atherosclerosis is a disease in which plaque—composed of fat, cholesterol, calcium, and other substances—builds up inside the arteries. Over time, the plaque hardens and can impede blood flow. When the buildup occurs, plaque can rupture and blood clots form in a coronary artery, leading to a heart attack—or worse.

For the study, published in the Lancet, researchers measured the participants’ risk of heart disease using non-invasive chest CT scans of 705 adults over age 40. They measured the extent of coronary atherosclerosis by computing the coronary artery calcification (CAC) score, which has been shown to be a reliable predictor of heart attacks and other cardiovascular events. 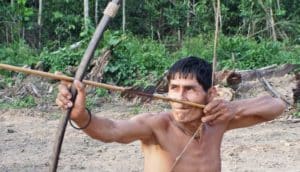 Based on the CAC scores, 85 percent had no risk of heart disease, 13 percent had low risk, and only 3 percent had moderate or high risk. Consistent with this low overall risk of coronary atherosclerosis, heart rate, blood pressure, cholesterol, and blood glucose also were low.

And these findings extend into old age. Sixty-five percent of 80-year-old Tsimane had almost no risk and only 8 percent had moderate risk.

By comparison, the United States-based Multi-Ethnic Study of Atherosclerosis, which included 6,814 people ages 45 to 84, found that only 14 percent of Americans had no risk of heart disease and a whopping 50 percent had a moderate or high risk—a five-fold higher prevalence than in the Tsimane population.

Tsimane men and women also showed similar risk, while CAC scores in the US and elsewhere are two to four times higher in men than women. Based on the comparison with the US study, an 80-year-old Tsimane has the same arterial age as an American in his or her mid-50s.

“We already know several risk factors commonly lead to heart disease,” Guerven says. “The Tsimane have minimal smoking, and they have no trans fat, and little saturated fat in their diets. They eat a lot of carbs, but they aren’t processed or refined. They’re mostly fiber-rich crops from their fields. They’re also active physically—not vigorously running marathons, but they are rarely sedentary. In combination, these factors put the Tsimane at lower levels of heart disease risk.”

So isn’t this just proof that if Americans lived a more Paleo-friendly lifestyle atherosclerosis would be the exception for us as well?

“Two aspects of Tsimane health are difficult to reconcile with their minimal atherosclerosis,” says Gurven. “Their ‘good cholesterol’—or HDL—is really low. Low enough to be classified as high-risk for most Tsimane.”

The fact that the same people have been sampled multiple times throughout their longitudinal Tsimane Health and Life History study demonstrates that the inflammation experienced by Tsimane is a chronic condition.

“Tsimane do suffer from acute infections, but inflammation is still relatively high even among those without active infections, and levels are consistent over time,” says coauthor Benjamin Trumble, formerly a postdoctoral researcher at UC Santa Barbara and now an assistant professor at the University of Arizona.

So why might elevated inflammation not place the Tsimane at higher risk for coronary artery disease? That leads to the role of intestinal helminths (worms) in heart disease, which he and colleagues assessed in a review paper in the journal Evolution, Medicine & Public Health.

The findings of that study show that among the Tsimane, people with worms have lower cholesterol and higher energy expenditures. “If you’re burning more calories each day, it’s easier to keep your weight down,” Guerven says. “But those are conventional risk factors.”

Worms may also help modulate and regulate immune function. And that is where opportunities for building new understanding can arise.

“There is some novelty here. In the poly-infected Tsimane world, most have helminthes, distinct gut microbiota and other infections. The initiation and progression of atherosclerosis, from lesion and atheroma development to plaque rupture, all involve inflammatory immune responses.”

Parasites are part of the story

The interesting possibility is that worms—perhaps in combination with other types of infections—might promote anti-inflammatory activity that protects against inflammation. Or they might help regulate immune function in ways that make inflammation less destructive to Tsimane arteries than it is for us.

Among Tsimane, the source of elevated inflammation is different than the chronic low-grade inflammation that affects Americans. “Our inflammation isn’t coming from infection, for the most part,” says Angela Garcia, a doctoral student in anthropology and coauthor of the paper. “It’s ‘sterile’—that is, it comes from smoking and obesity. But that’s not what we’re seeing with the Tsimane.”

Either way you look at it, parasites are part of the story of Tsimane lives, and so should be considered in combination with more conventional risk factors like diet, smoking, and activity, Gurven says.

Figuring out the relative contributions of the risk factors in isolation, and in combination, is the complicated part. “It’s hard to know whether there are threshold levels. Some experts believe, for example, that if your LDL cholesterol is so low [e.g. <70 mg/dL], there’s nothing to oxidize and build up in the arteries, and so it might not matter how sedentary you are. But without taking statins, there is probably no way a sedentary American eating a typical diet will ever get their LDL that low.”

Recommendations concerning “healthy” cholesterol levels and the point at which statins become an appropriate course of action have changed, Gurven notes. “But even the levels typically recommended as being desirable [<100 mg/dL] are still a lot higher than those observed among Tsimane and other subsistence populations.

“At the beginning of our longitudinal study, the average Tsimane LDL was 72 mg/dL,” Gurven csays, “but now it’s higher—91 mg/dL—as Tsimane lifestyles have begun to change. Disentangling how the mix of risk factors and exposures now shifting over the life course will impact heart disease risk in the coming years is a critical next step.”

Researchers from the University of New Mexico; the Institute for Advanced Study in Toulouse, France; and the Horus Project are coauthors of the work.

Prejudice against Native Americans may spike after sports mascot changes