The systolic blood pressure readings of African Americans dropped between one to five points when they moved to less segregated neighborhoods, report researchers.

“This study provides stronger, more direct evidence that segregation impacts blood pressure and harms the health of African Americans,” says lead author Kiarri Kershaw, an assistant professor of preventive medicine at Northwestern University Feinberg School of Medicine. “I believe it’s related to the stress of living in these neighborhoods.” 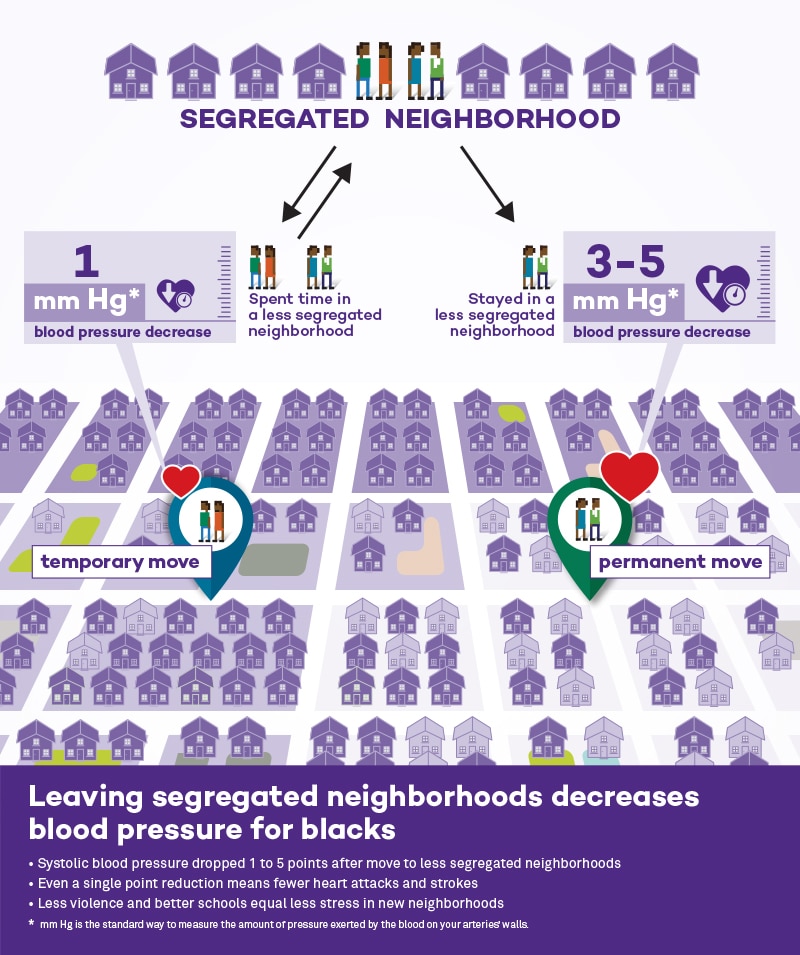 It is the first study to look at the longitudinal effects of living in less segregated areas on blood pressure and to compare the effect within the same individuals. Previous research showed racial residential segregation is related to a prevalence of hypertension at a single point in time.

“In a less violent area with better resources, you are more secure about your family’s safety and your children’s future in better schools,” Kershaw says. “You see opportunities for the economic mobility of your kids. And there is better access to good grocery stores, health care, and an economically vital business district.”

‘This is a powerful effect’

The study examined longitudinal associations of racial residential segregation with blood pressure in more than 2,000 African-American participants of the Coronary Artery Risk Development in Young Adults study, a national study of adults who have been followed for approximately 25 years. Researchers looked at the associations of within-person change in exposure to segregation and within-person change in blood pressure. The participants were ages 18 to 30 at baseline and ages 43 to 55 at follow up.

The four CARDIA sites are in Chicago; Birmingham, Alabama; Minneapolis; and Oakland, California.

People are racist against black places, too

Systolic blood pressure, the first number in a blood pressure reading, is a greater predictor of heart attacks and strokes in African Americans than diastolic (the second number), based on evidence from the CARDIA study.

The participants’ reductions in blood pressure were even more dramatic for a subset of individuals, who lived in highly segregated neighborhoods when the study began, then moved to and remained in low or medium segregated residential areas for the entire follow-up period. Their systolic blood pressure fell from 3 to 5 mm Hg.

“This is a powerful effect,” Kershaw says. “In terms of impact, just 1 mm Hg of reduction of the systolic blood pressure at the population level could result in meaningful reductions in heart attacks, strokes, and heart failure.”

Racial disparities in hypertension prevalence and related health outcomes represent one of the largest and most persistent sources of health inequities in the US.

“Findings from our study suggest social policies that reduce segregation, such as the opening of housing markets, may have meaningful health benefits such as the reduction of blood pressure,” Kershaw adds.

This finding is consistent with several previous studies showing individuals with higher education levels are less likely to have hypertension. Changes in education, though, had little effect on the relationship between segregation and systolic blood pressure.

“This suggests education may not be the primary pathway through which changes in exposure to segregated neighborhoods influences changes in blood pressure,” Kershaw says.

Try it: Map rates how well your neighborhood protects cognition

Neighbors can close gap when teens missed bonding with mom