Regular moms, not just famous ones, report “mommy-shaming” about how they raise their children.

Actress Reese Witherspoon was once food-shamed for feeding her toddler cinnamon buns for breakfast. Critics were quick to judge model Coco Rocha for giving her baby formula. And a frenzy ensued when former pop star Jessica Simpson posted a photo of her five-year-old daughter in a mermaid costume some felt was too revealing.

Six in 10 mothers of children ages 0-5 say they have been criticized about parenting, on everything from discipline to breast feeding, according to a new report from the C.S. Mott Children’s Hospital National Poll on Children’s Health at the University of Michigan. The report is based on responses from a national sample of 475 mothers with at least one child between ages 0-5. 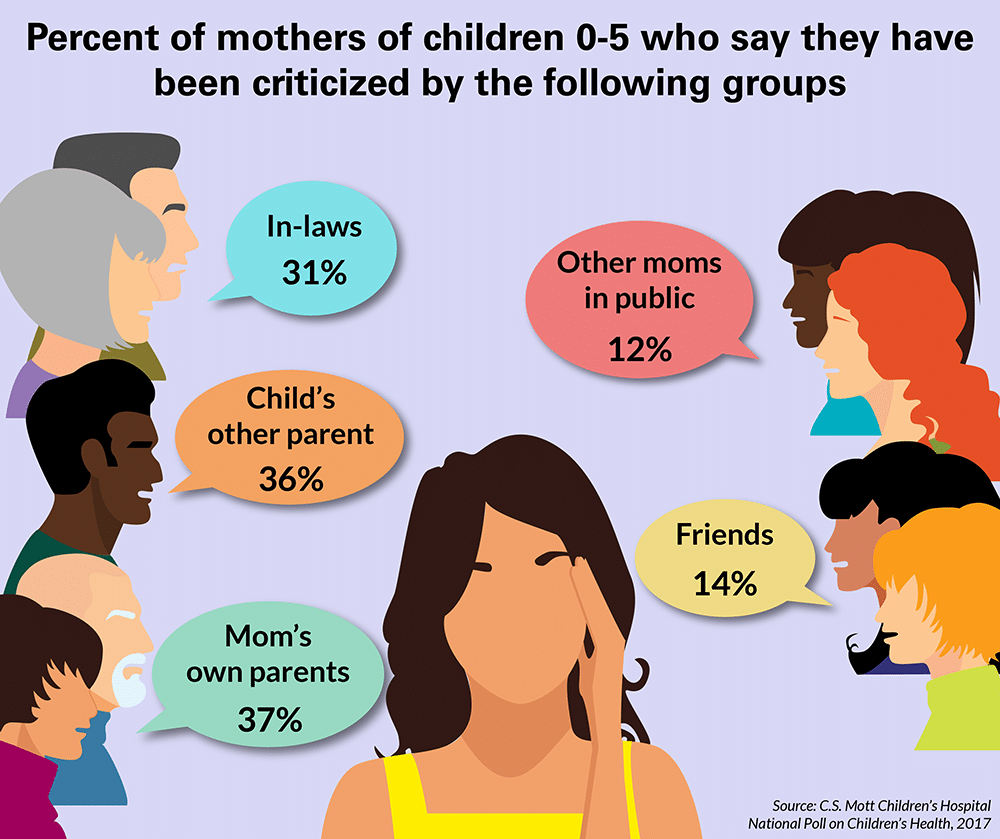 “Our findings tap into the tensions moms face when parenting advice leads to more stress than reassurance and makes them feel more criticized than supported,” says poll co-director Sarah Clark.

“Mothers can get overwhelmed by so many conflicting views on the ‘best’ way to raise a child,” she adds. “Unsolicited advice—especially from the people closest to her child—can be perceived as meaning she’s not doing a good job as a mother. That can be hurtful.”

Unlike some celebrity parents who receive anonymous blasts on social media, most moms seem to feel that their greatest critics lie within their own families.

The most frequent offenders? A mother’s own parents. Thirty-seven percent of poll respondents have felt second-guessed by their mother or father.

That tally was followed by a spouse or their child’s other parent (36 percent) and in-laws (31 percent.) Mothers report far less criticism from friends, other mothers they encounter in public, social media commenters, their child’s doctor, and child care provider.

Discipline is the most frequent topic of criticism, reported by 70 percent of mothers who felt shamed. Other areas of concern are diet and nutrition (52 percent), sleep (46 percent), breast- vs. bottle-feeding (39 percent), safety (20 percent), and child care (16 percent).

Clark notes that the subject of discipline is especially rife with opposing views and cultural differences—spanking versus time-outs, for instance—or strict adherence to rules instead of allowing space for a child to explore.

New information about child health and safety also often challenge long-held parenting practices that other family members used themselves or have grown up with.

“Family members should respect that mothers of young children may have more updated information about child health and safety,” Clark says, “and ‘what we used to do’ may no longer be the best advice.”

Although 42 percent of mothers say the criticism has made them feel unsure about their parenting choices, it has also pushed them to be proactive.

Many of the mothers in the poll said that they have responded to “shamers” by consulting a health care provider for advice. In some cases, new information prompted mothers to make a change in their parenting but other times, research validated a parenting choice.

Mothers in the new poll were much less likely to report being criticized by their child’s health care provider than by family members.

“This indicates that most mothers view their child’s health care provider as a trusted source of accurate information and advice, not as a critic,” says Clark. “Child health providers can help by encouraging mothers to ask questions about any parenting uncertainties, and offer reassurance and practical advice that helps boost mothers’ confidence and reduce anxiety around choices.”

Both chill moms and ‘tiger’ moms get the job done

Sixty-two percent of moms in the Mott poll say they get a lot of unhelpful advice from other people, while 56 percent believe moms get too much blame and not enough credit for their children’s behavior.

And half of those surveyed said they simply avoid people who are too critical.

“It’s unfortunate when a mother feels criticized to the point where she limits the amount of time she and her child will spend with a family member or friend,” she says. “To guard against that situation, advice to mothers of young children should be given with empathy and encouragement.”

How to approach love and loneliness this Valentine’s Day