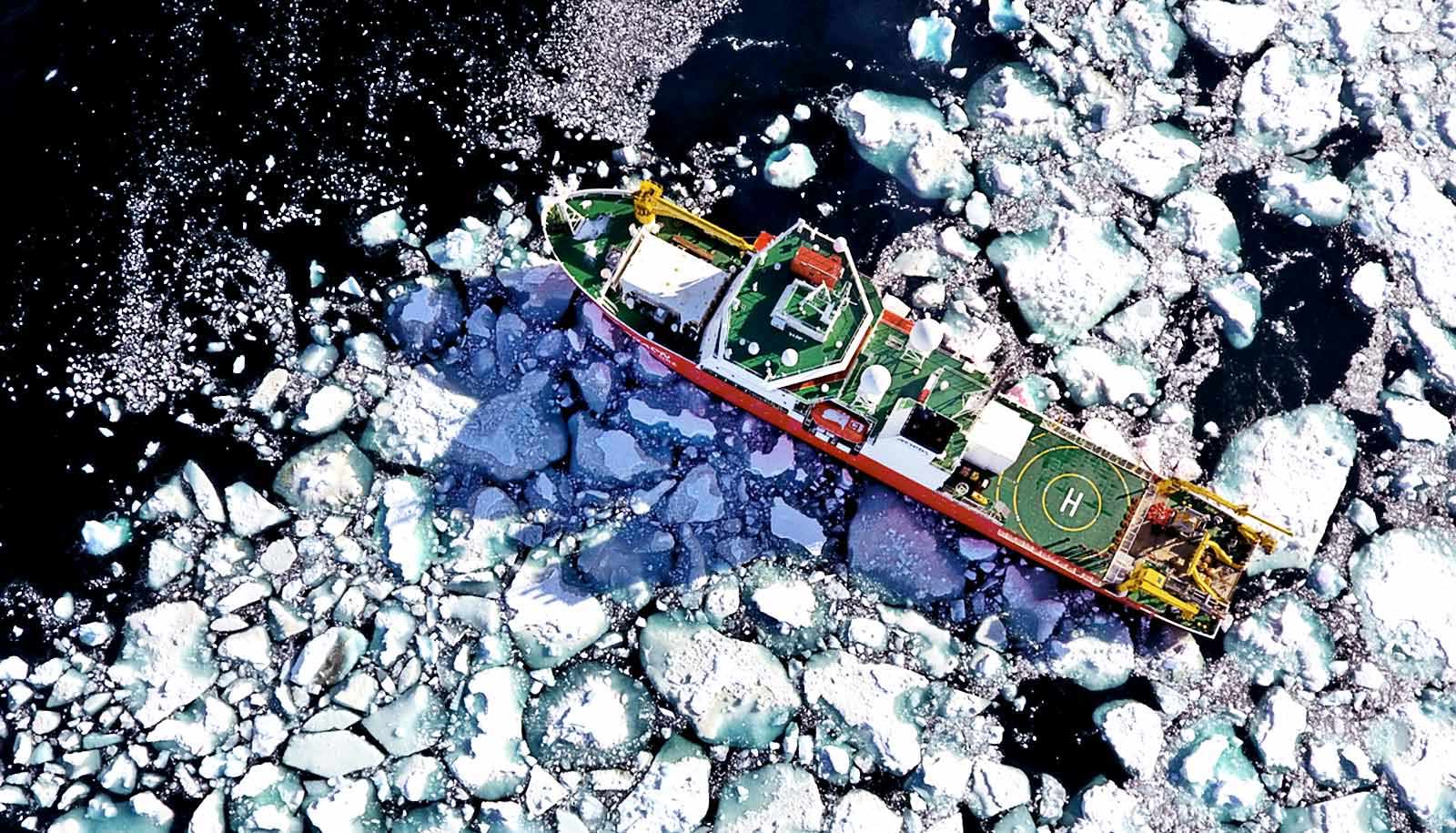 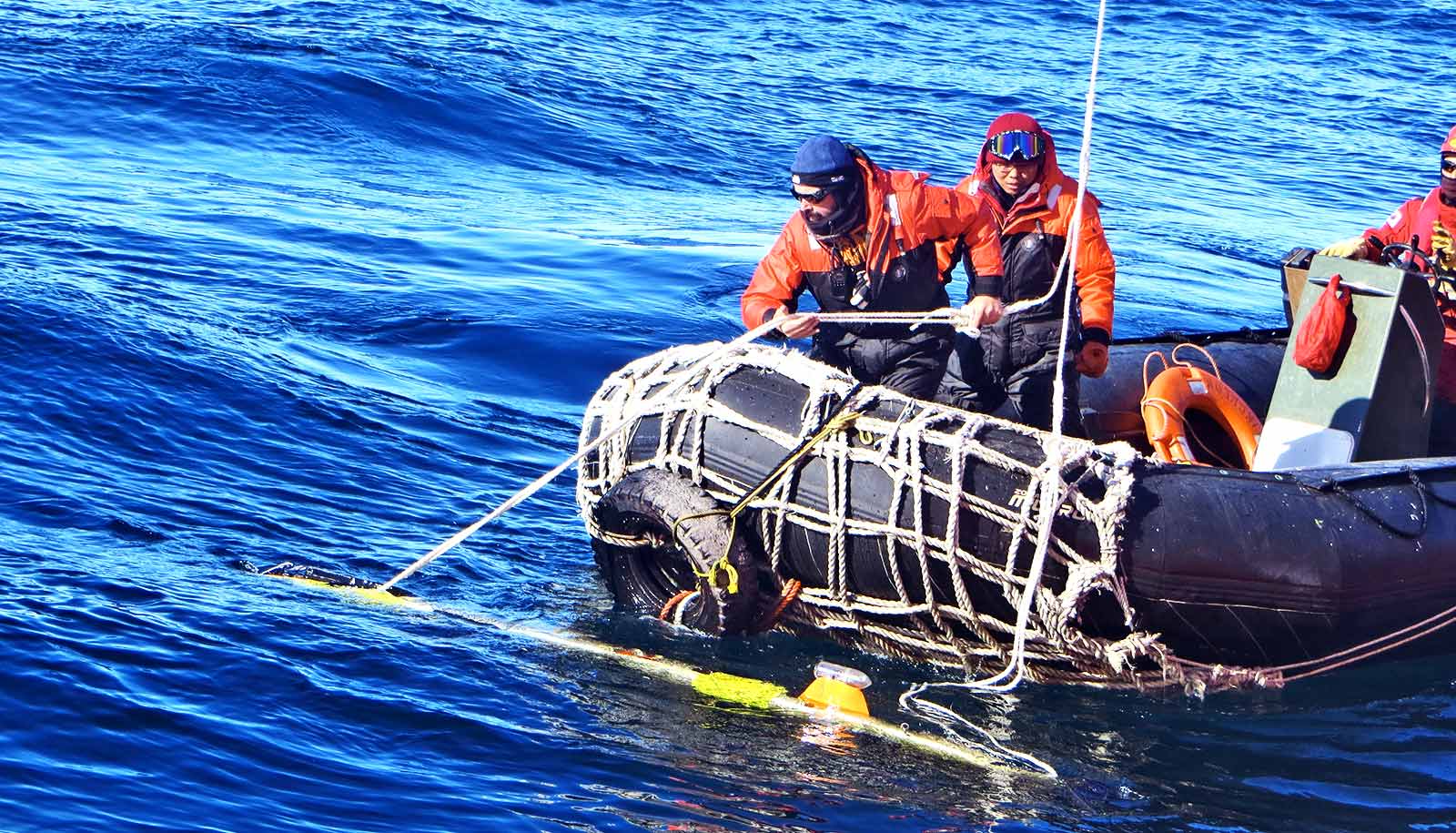 Fishing for a glider: Damien Guihen with the University of Tasmania and Xian Wei Wang, from New York University in Abu Dhabi, retrieve the autonomous underwater vehicle. (Credit Cassie Bongiovanni/University of New Hampshire) 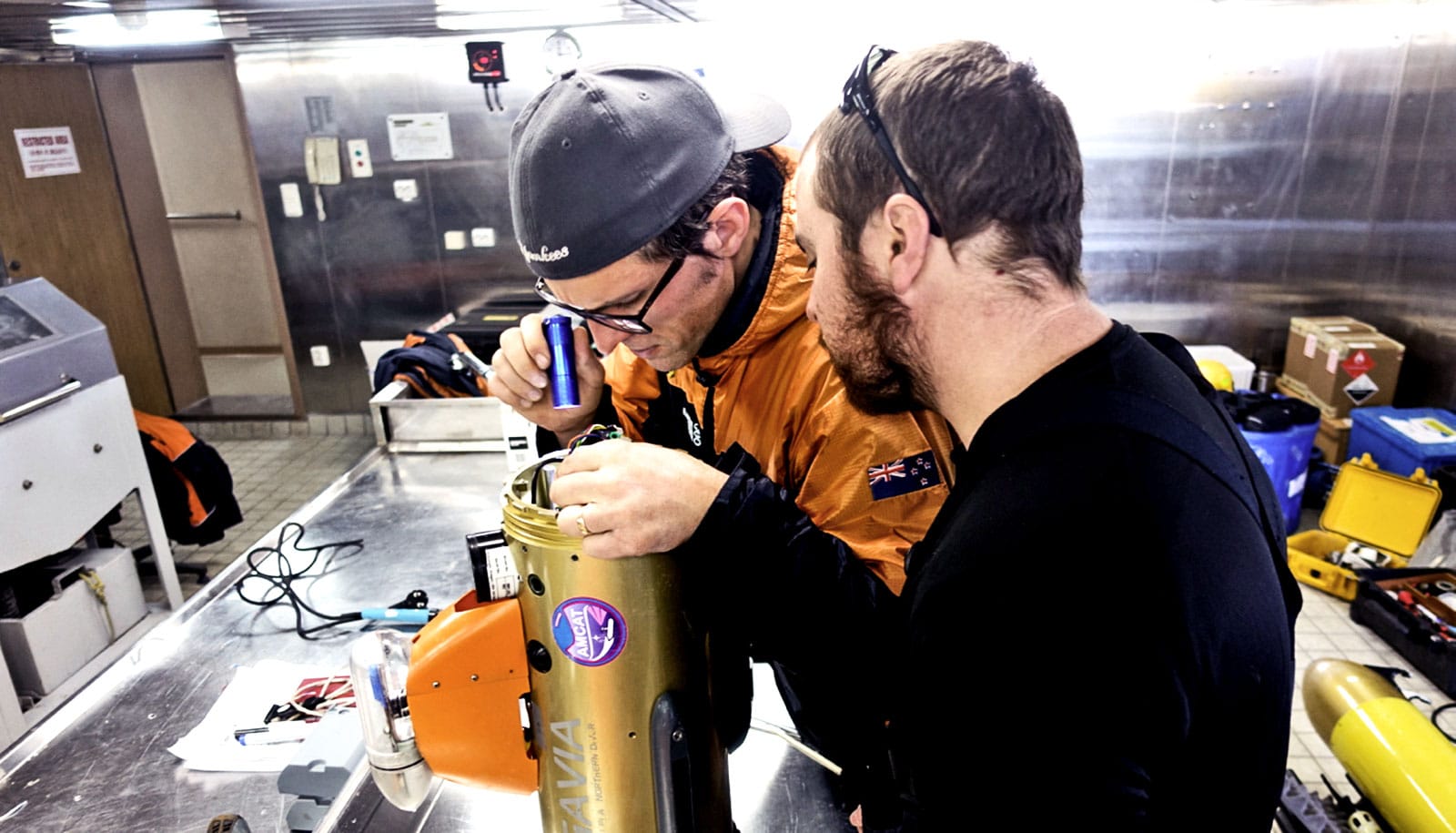 UC Davis engineering professor Alex Forrest, in orange jacket, and Nathan Kemp from Blue Ocean Monitoring out of Perth, Australia, do field repairs on the autonomous underwater vehicle (AUV) glider, Gavia. Much of their time was spent preparing and debugging the robots, which also included an AUV with wings, named “Storm Petrel.” (Credit: Damien Guihen/University of Tasmania) 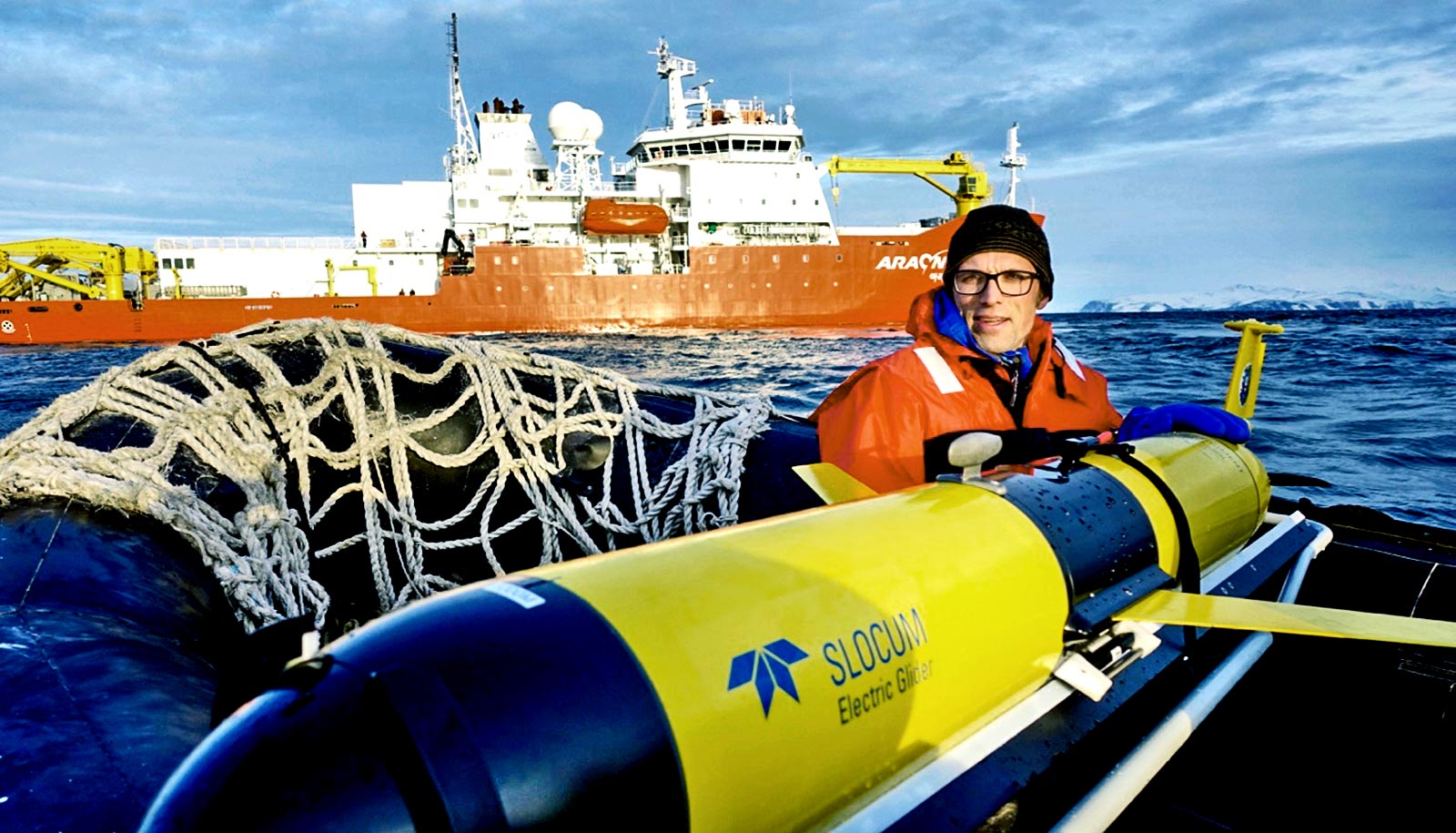 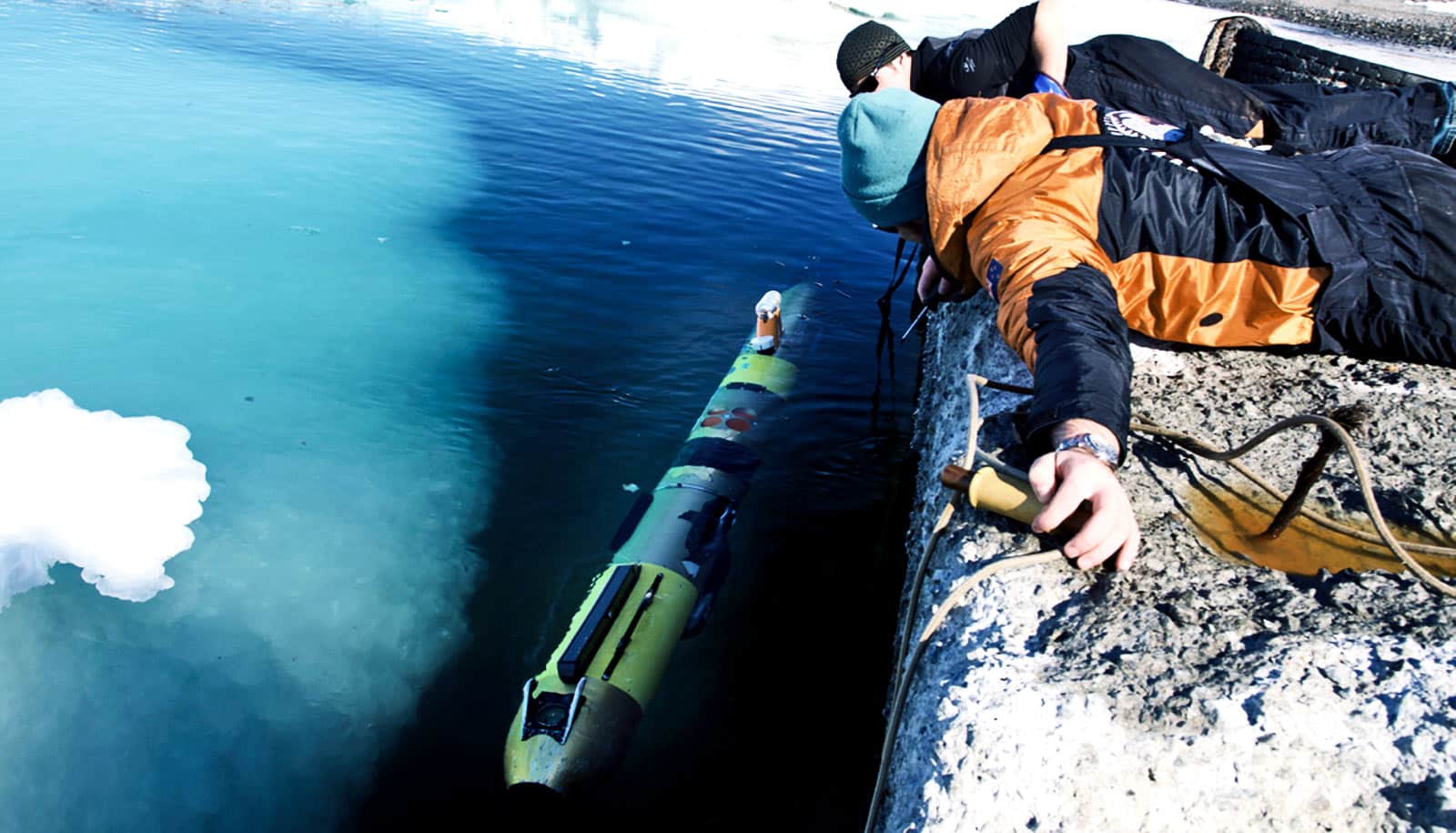 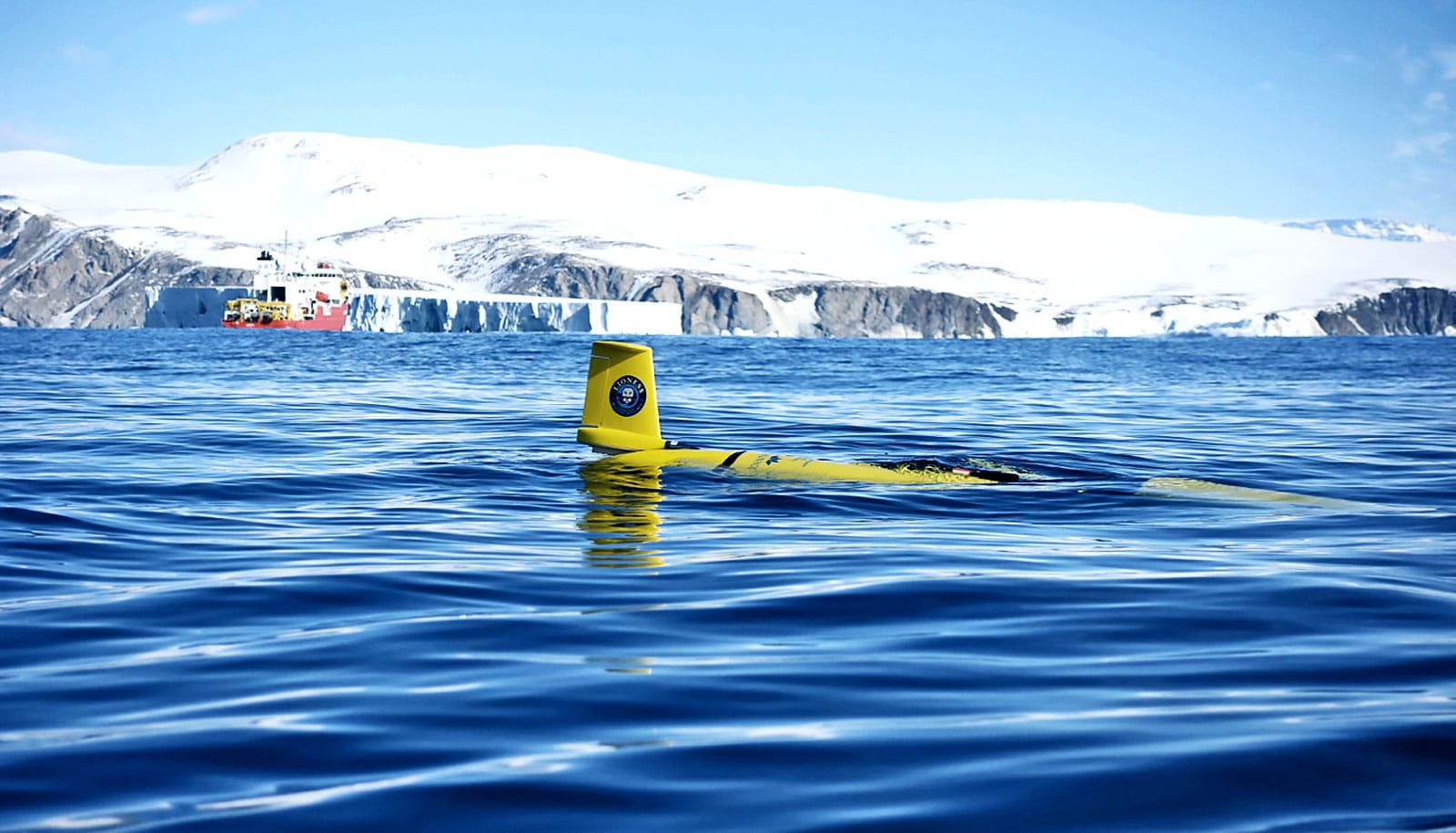 The underwater glider Storm Petrel makes its maiden voyage. After this initial round, the team processed the data and then sent it out again for its full 7-day mission. (Credit: Damien Guihen/University of Tasmania) 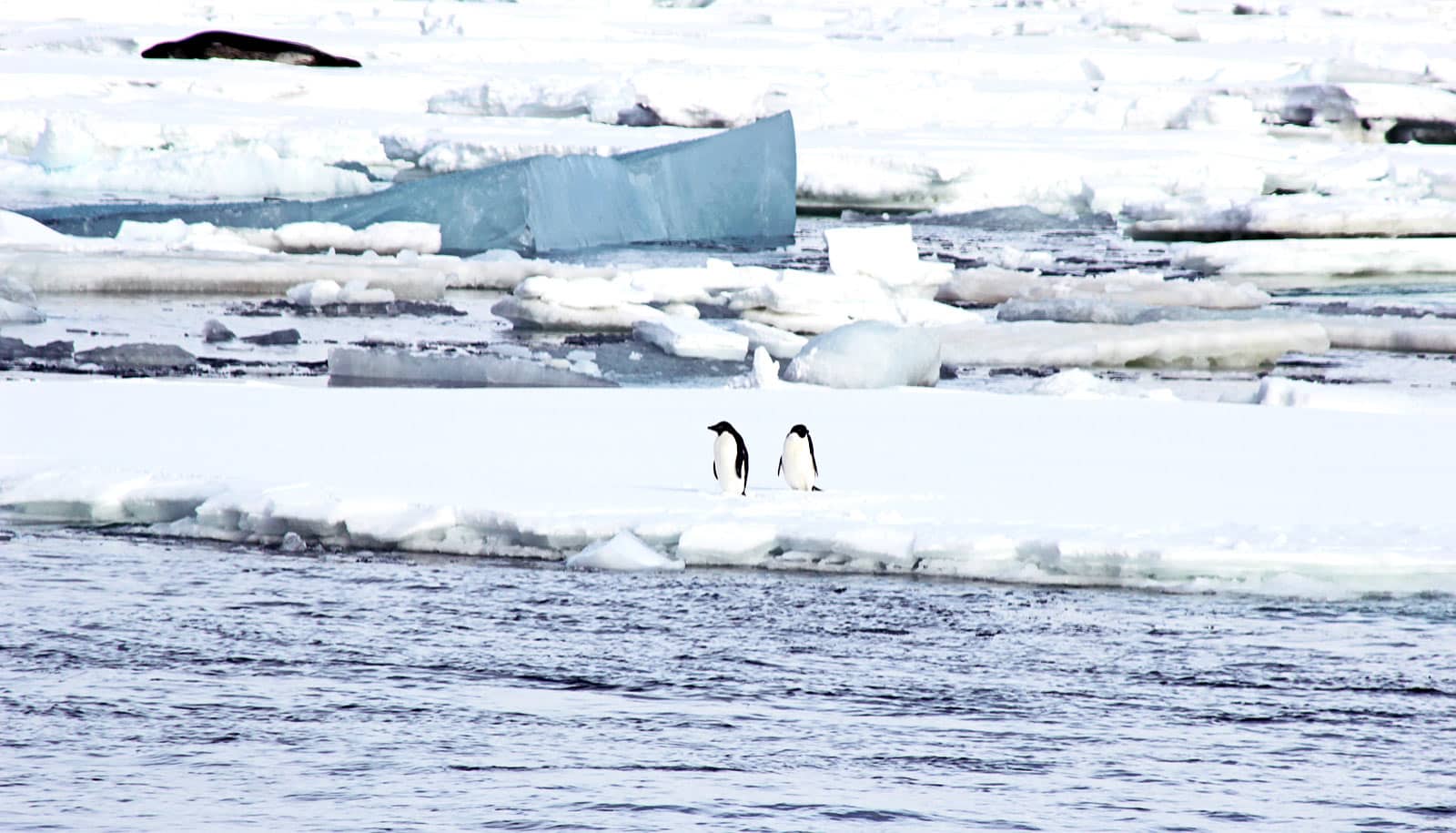 Adélie penguins live only in Antarctica. They are seen here with a seal in the background. Alex Forrest was amazed by Antarctica’s wildlife. He said that, unlike in the Arctic, wildlife in Antarctica have few predators, so they had little fear of humans. (Credit: Danielle Haulsee/University of Delaware) 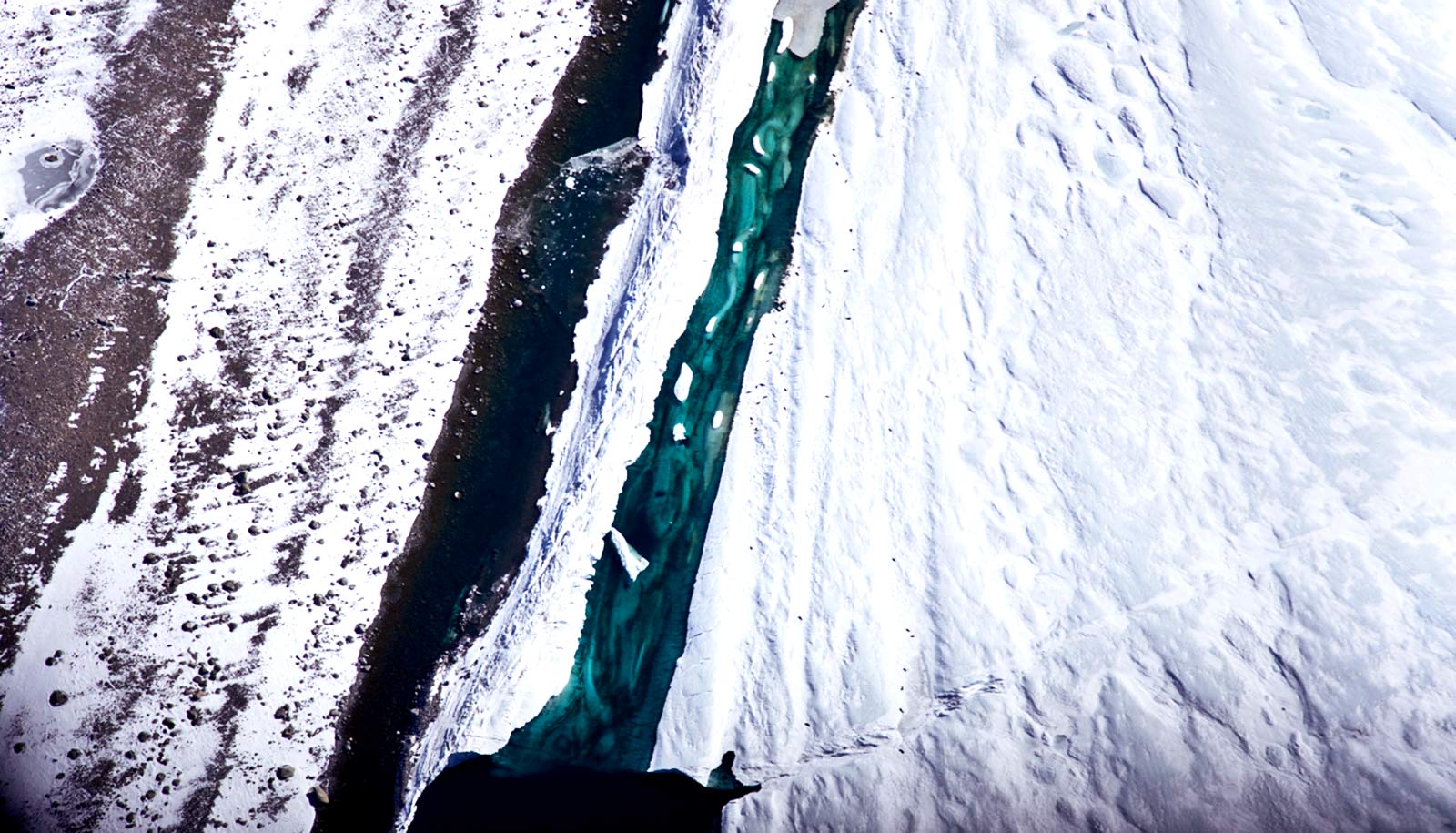 A teal ribbon of water flows on top of a glacier at Inaccessible Island, an extinct volcano and protected wildlife reserve in the South Atlantic Ocean. An uncommon sight, the researchers were unsure whether the ocean was rising over the ice, or whether freshwater was melting and flowing downward in this shot. The small black dots to the right of the teal green water are seals basking in the sun. (Credit: Damien Guihen/University of Tasmania) 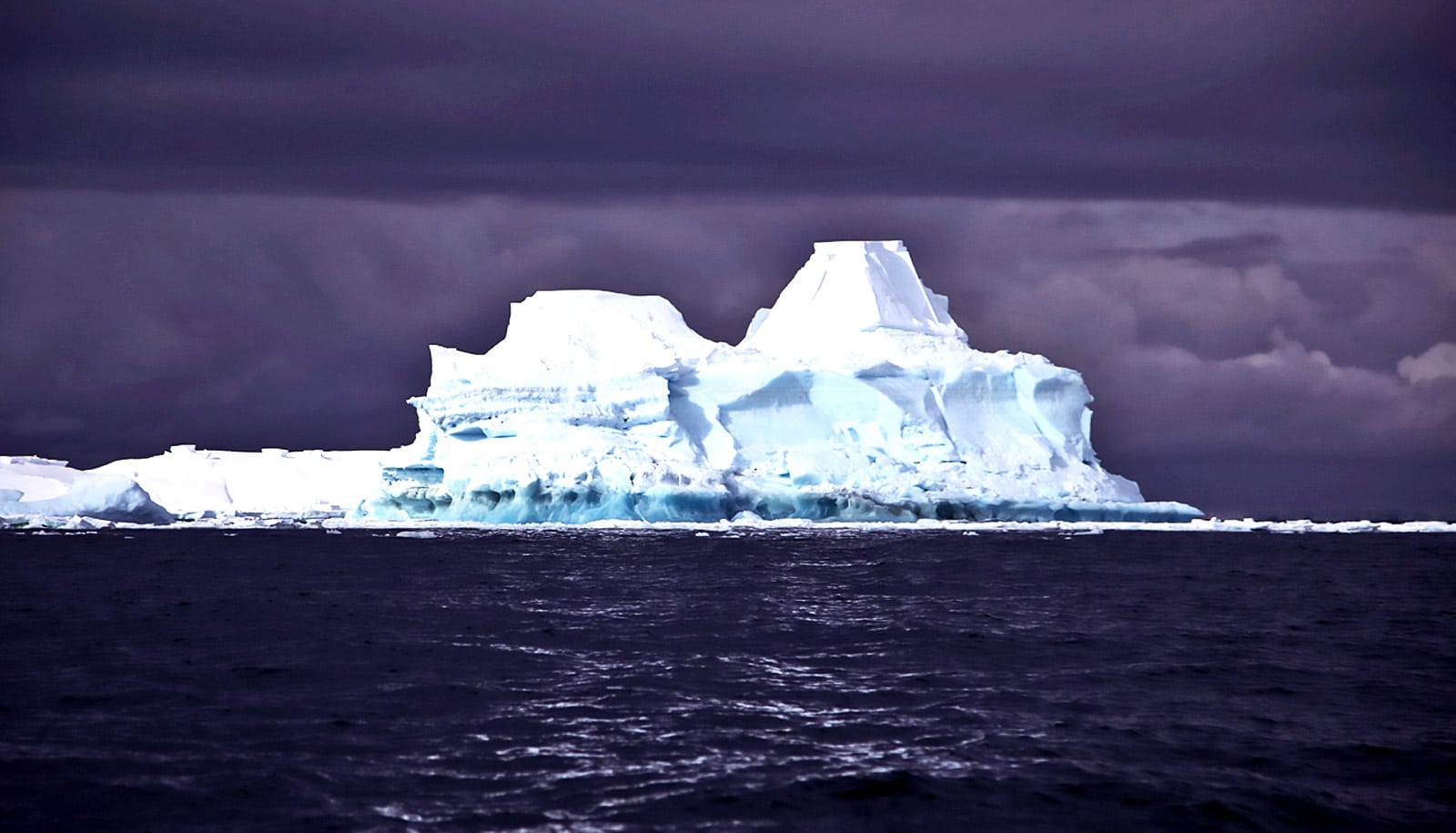 An iceberg off the inlet of Jang Bogo Station in Terra Nova Bay, Antarctica. (Credit: Damien Guihen/University of Tasmania)
Previous Next

A team of scientists is using robots to measure and map ice shelves in Antarctica, hoping to deepen our understanding of how the shelves collapse and change under the pressure of climate change.

Alexander Forrest led a six-member robotics team in Antarctica on the Western Ross Sea and Terra Nova Bay as part of an international expedition, LIONESS, led by the Korea Polar Research Institute. That stands for Land-Ice/Ocean Network Exploration with Semiautonomous Systems.

Their mission: Deploy two robots, or autonomous underwater vehicles (AUV)—one to dive beneath the sea ice to map the bottom of the Nansen ice shelf, from which two Manhattan-sized icebergs broke last year. The other, a glider with wings named Storm Petrel, to patrol the front of the ice shelf for 10 days, looking for evidence of freshwater and capturing change over time.

“Ice shelves are melting,” says Forrest, an engineering professor at the University of California, Davis. “We know this. But we don’t know how fast they’re melting. To actually make on-site measurements is the next step. We’re trying to get a baseline understanding of what changes are happening in the Antarctic.

“As a global community, we don’t really understand what we’re losing.”

This July, the team will head in the opposite direction, to the Arctic’s Milne Fjord, where Forrest and colleagues plan to study the last epishelf lake in Canada.

Epishelf lakes form when meltwater flowing off a glacier is trapped behind a floating ice shelf. As ice shelves in the Arctic disappear, so do the epishelf lakes dammed behind them. While Canada may soon be epishelf-free, others remain in Greenland and Antarctica. The research is intended to better explain time scales, as ice shelves are melting faster than scientists earlier predicted.

“It comes down to understanding how this environment is now so we can understand how potential future climate scenarios will drive these systems in Greenland and Antarctica, as well,” Forrest says.

When not swimming alongside polar ice, the Storm Petrel glider trades the ocean for freshwater. It’s currently settling in to its new home at Lake Tahoe, which stretches across the California and Nevada borders. The UC Davis Tahoe Environmental Research Center (TERC) plans to deploy it in the lake early this summer.

The plan is for the glider to take continuous measurements, provide real-time information to TERC’s network of instrumented buoys, chase storm events, and ultimately help round out the picture of the processes and impacts affecting Lake Tahoe.

“Lakes are highly variable, both spatially and in time,” says Geoffrey Schladow, director of TERC. “Conventional measurements cannot capture this dynamism. But with a glider operating for weeks at a time, from the surface to the very bottom, we finally have the appropriate tool.”

Lake Tahoe is getting “smarter” all the time with its network of nearshore sensors, NASA buoys, and good old-fashioned manual sampling from TERC’s research vessel. But the glider can do something those other tools cannot: Move around the lake in bad weather and rough conditions.

And, as nearly everyone who studies freshwater lakes can attest, bad weather—with its mixing, churning, swelling, and upwelling—is when everything really interesting happens in a lake.

Be it at the poles, or in a California lake, the data these robots collect are helping to shape the picture of how aquatic environments are changing, and what might be expected in the years to come.