When NASA’s Cassini spacecraft careened to its final destination in the upper atmosphere of Saturn this morning, it ended a journey of 4.9 billion miles and just one month shy of 20 years in space.

The spacecraft’s fateful dive was the final beat in the mission’s Grand Finale—22 weekly dives, begun in late April, through the gap between Saturn and its rings. No spacecraft has ever ventured so close to the planet before.

“The spacecraft will be transmitting data until the very end, and we’ll be there when it stops.”

“Cassini-Huygens is a classic example of a ‘flagship’ mission, accomplishing tremendous science in many disciplines over many years,” says Alfred McEwen, a professor of planetary sciences at the University of Arizona.

NASA chose to end the mission by safely disposing of the spacecraft, burning it up in Saturn’s atmosphere rather than allowing it to run out of fuel and committing its fate to an aimless tumble and potential crash onto one of Saturn’s moons.

Mission scientists were especially concerned about contaminating Titan or Enceladus, the two Saturnian moons where life as we know it might be possible—a possibility that Cassini’s multiple flybys discovered.

When it launched, Cassini-Huygens was the biggest, most complex interplanetary spacecraft ever flown. In 2004, it arrived in the Saturn system, carrying with it a robotic passenger in form of the Huygens probe, contributed to the mission by the European Space Agency, or ESA.

On January 14, 2005, Huygens would make history as the first—and, so far, only—human-made object to touch down on a world in the outer solar system. Through the eyes of Huygens, people on Earth could watch as the probe hurtled through the opaque and hazy atmosphere enshrouding Titan.

The probe was equipped with an instrument called DISR, short for Descent Imager/Spectral Radiometer. Scientists followed Huygens with six science experiments as it descended through Titan’s thick atmosphere until it touched down on a virtually unseen surface. In addition to images taken with DISR, the lander recorded data that allowed scientists to gather clues about Titan’s surface.

During many flybys, Cassini monitored the dynamic Titan using its camera suite and an instrument called VIMS, a Visual and Infrared Mapping Spectrometer, to clarify the makeup of Saturn, its rings, and moons.

Those observations revealed details about the cycle of methane, which on Titan takes the role of water on Earth—forming clouds, raining down, and forming lakes, as well as freezing into ice. 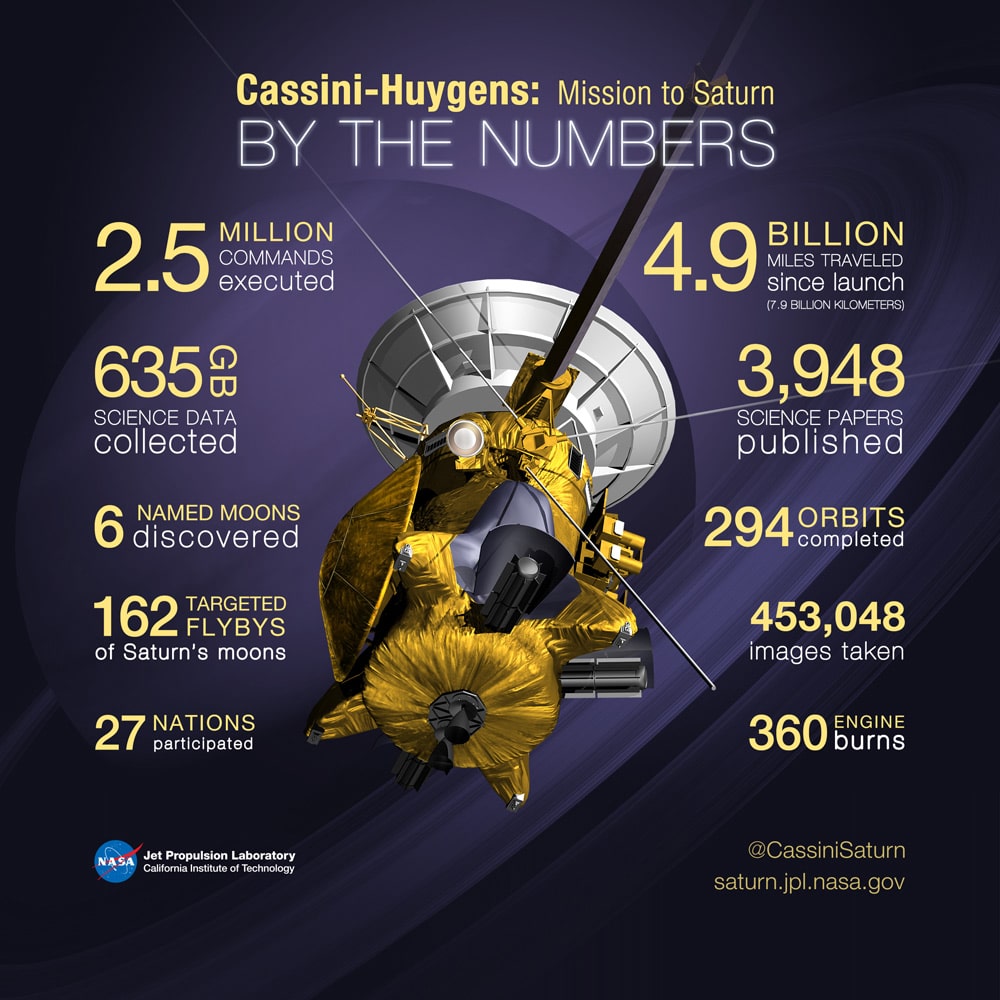 Another one of Saturn’s moons, ice-clad Enceladus, rose to stardom during several flybys. Enceladus plows along the orbit of the E Ring, Saturn’s second-from-outermost ring, which reaches extremely far out into space, brushing up against the orbit of Titan.

“There was speculation that the moon had something to do with the E Ring,” McEwen says.

“This mission has been going for so long, it’s a little hard to believe that it’s over.”

During multiple close flybys, Cassini used its full science payload to detect and analyze water-rich plumes erupting from the moon’s south pole far into space, a spectacular discovery that McEwen considers one of the highlights of the entire mission.

“We saw that these plumes are quite large and extensive,” he says. “Because we were able to measure their composition with Cassini’s instruments, we could show that (tiny particles from those eruptions) are the source of the E Ring.”

Evidence for subsurface oceans of water were discovered by Cassini inside both Enceladus and Titan, making them prime targets for future NASA missions.

Cassini made its last closest approach to Titan on September 11 at 12:04 pm PDT, at an altitude of 73,974 miles (119,049 kilometers) above the moon’s surface, causing the spacecraft to slingshot into its final approach to Saturn—but not before it would send its final images from Titan to Earth.

Why giant white spots pop up on Saturn

Cassini will be doing science even after being gripped by Saturn’s gravity, pulling it into destruction, by measuring the composition, temperature, and other properties of Saturn’s atmosphere.

“The spacecraft will be transmitting data until the very end, and we’ll be there when it stops,” McEwen says. “It won’t go very deep, because it is not a probe designed to go deep, but still deeper than anything else.”

When Cassini arrived at Saturn, where one “year” lasts 29.5 Earth years, the gas giant went through northern winter, and Cassini was there to witness the planet’s change of seasons.

The end of the mission is “not unexpected,” McEwen says. The plan to end with a solstice mission, followed by a plunge into Saturn, was put in place about seven years ago.

Still, “this mission has been going for so long, it’s a little hard to believe that it’s over.”