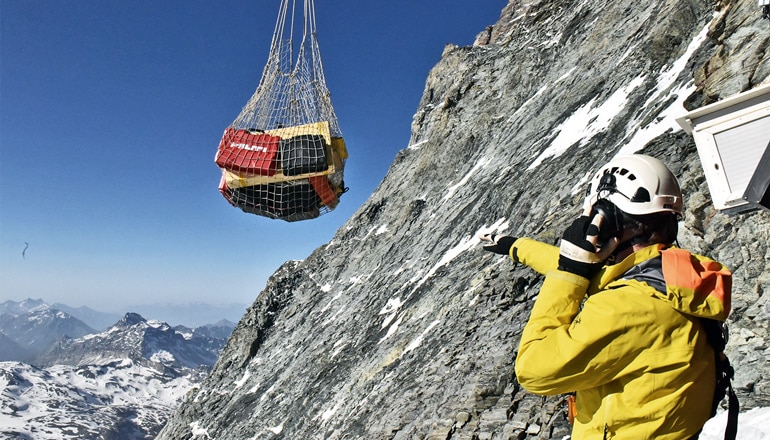 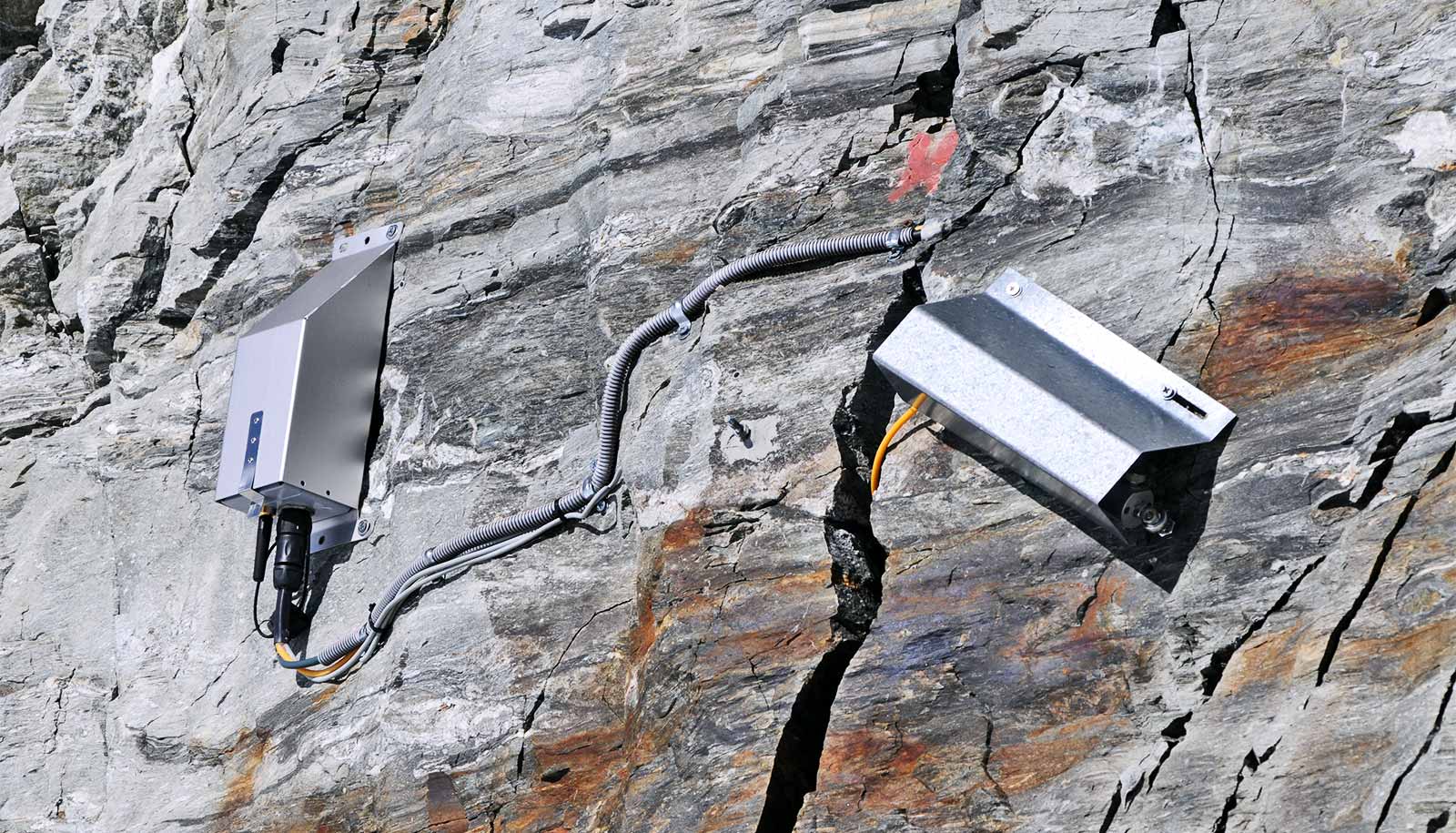 A wireless sensor on the Matterhorn measures temperature and displacements at the crevices. (Credit: ETH Zurich) 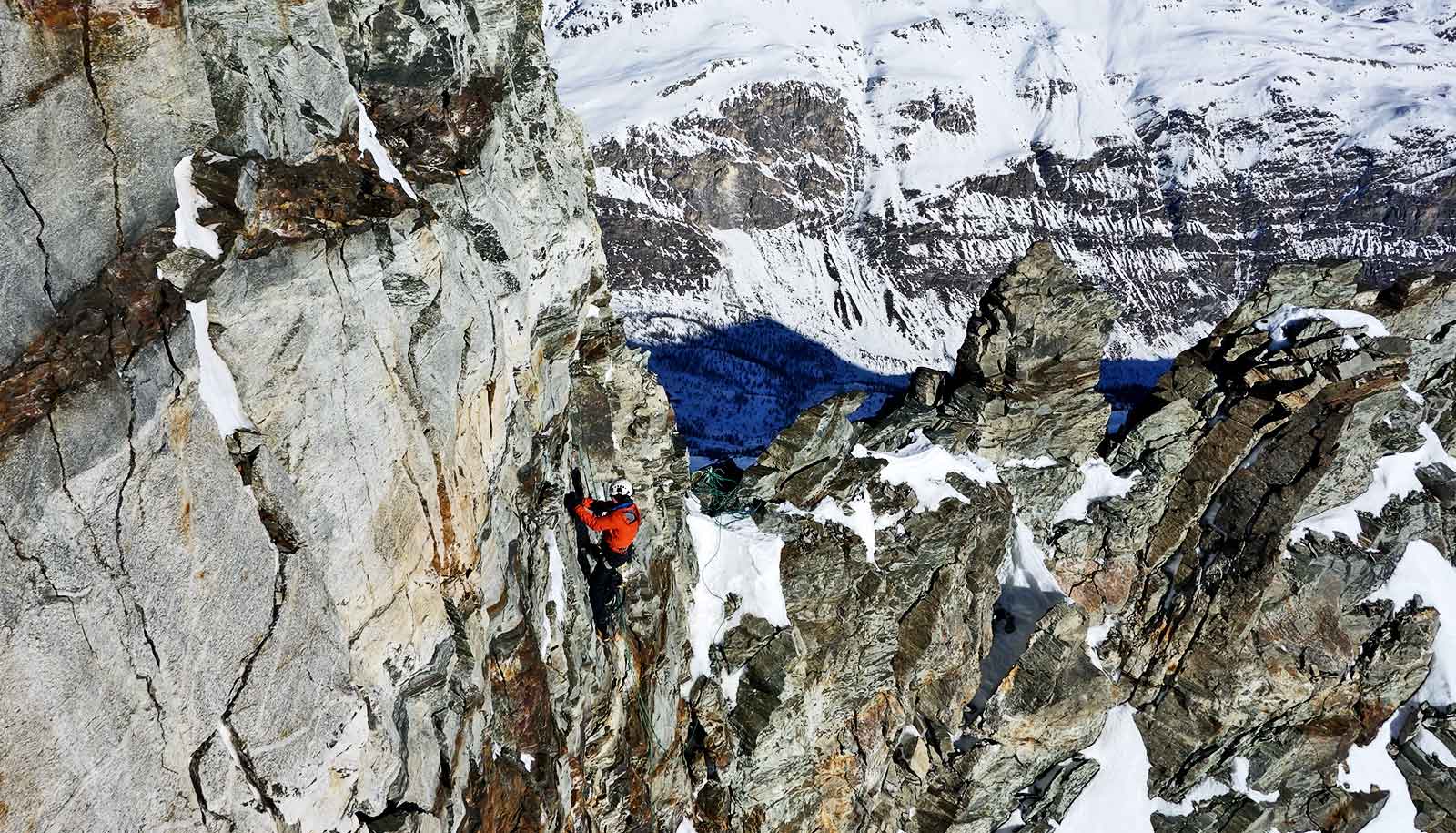 Jan Beutel during maintenance work on the sensor network in the 2003 rockfall zone. (Credit: ETH Zurich) 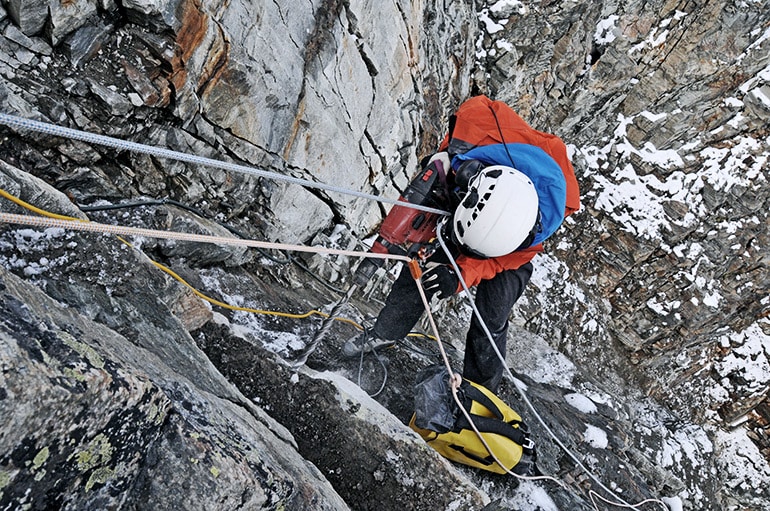 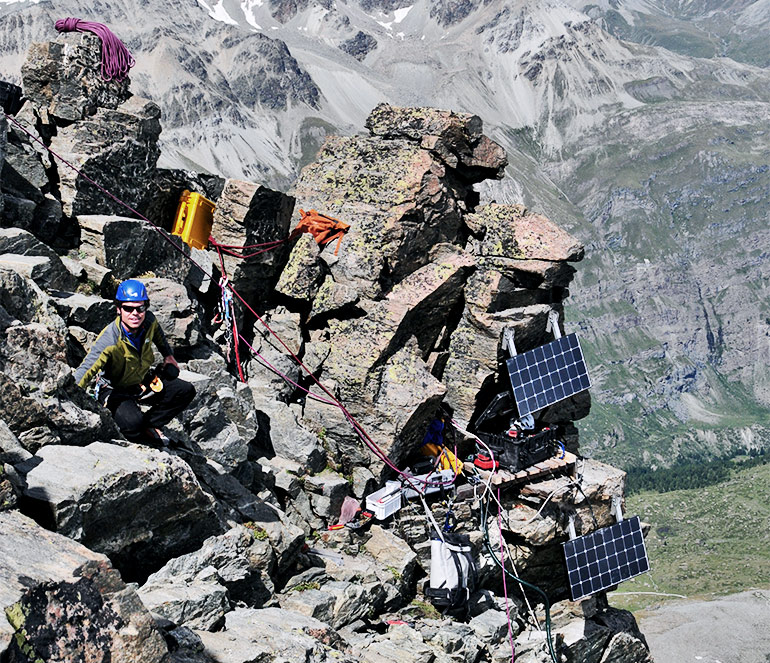 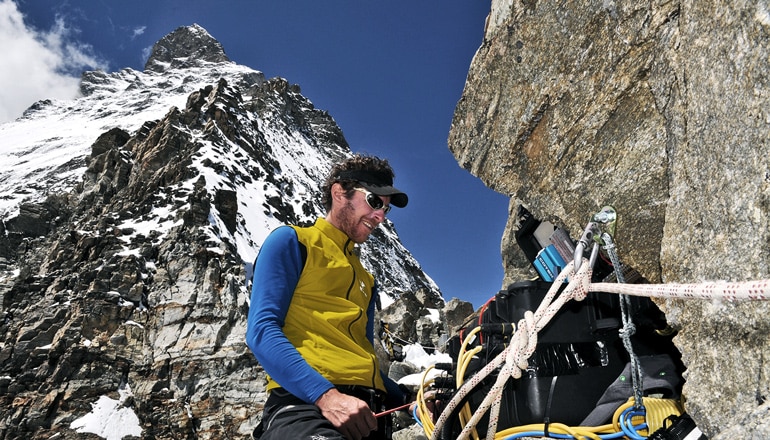 A network of wireless sensors on the Matterhorn’s Hörnli ridge has been constantly streaming measurement data on the condition of steep rock faces, permafrost, and prevailing climate for the past decade.

The summer heatwave of 2003 triggered a rockfall that shocked both researchers and the general public: 1,500 cubic meters of rock broke away from the Hörnli ridge—a volume roughly equivalent to two houses. The fracture event exposed bare ice on the surface of the steep scarp. Experts soon realized that the record temperatures had warmed the rock down to such a depth that the ice contained in its pores and fissures had melted. This effectively caused a sudden reduction of the bonding holding the rock mass together.

The unpredicted rockfall sparked PermaSense, a consortium bringing together experts from different engineering and environmental research disciplines. They launched the project in 2006 with the initial goal of making measurements and observations that had not previously been possible. Using state-of-the-art technology, the researchers were looking to obtain in situ measurements in steep bedrock permafrost of unprecedented quality and quantity.

The team beat their goal, as they report in the journal Earth System Science Data. The study describes a 10-year record of high-resolution data scientists have captured on the Hörnli ridge of the Matterhorn, 3,500 meters above sea level. A total of 17 different sensor types positioned at 29 distinct sensor locations in and around the 2003 rockfall zone delivered 115 million separate data points.

“This data set constitutes the longest, densest, and most diverse data record in the history of alpine permafrost research worldwide,” says Jan Beutel, senior researcher at the computer engineering and networks laboratory at ETH Zurich.

“The combined analysis of long-term monitoring obtained from different types of instruments lead to a better understanding of the processes that can lead to the destabilization of steep rock,” says Samuel Weber, co-leader of the project and now postdoctoral researcher at TU Munich.

The sensor network also comprises an automatic high-resolution camera that takes photos of the fracture site every two minutes. “Crackmeters” measure the widening of the fissures and the displacement of boulders. Temperatures are measured at various depths in the rock face, as well as on the surface. Inclinometers and GPS sensors permanently measure how much larger rock partitions as well as the whole mountain ridge are deforming and gradually tilting towards the valley. In recent years the researchers have added equipment for measuring acoustic emissions and microseismic data.

The data are relayed via WLAN from the Hörnli ridge to the summit station of the cable car of the Klein Matterhorn nearby, from where they are transmitted in real time via the internet to ETH Zurich’s data center. Here researchers continuously capture, analyze, and assess them—and have been doing so for the past 10 years, around the clock, whatever the weather.

“Over the past three years of our project, the incorporation of more complex seismic data have been particularly useful in helping us to quantify what we were keen to research from the start: the destabilization leading to rockfall. This has helped us identify patterns in the signals from the mountain that enable us to capture such events,” Beutel says.

The use of seismic sensing systems made it possible to detect many different signals—such as the formation of cracks initially invisible and hidden in the rockface—which the previous sensors were unable to capture.

“Seismic sensors capture much more data, and offer us unprecedented information density and analysis opportunities,” says Beutel, an electrical engineer. But these sensors have several drawbacks: they need cables, more power, and deep bore holes, which researchers first have to drill. And they also record signals which have nothing to do with the mountain, such as the footsteps of climbers on their way to the Matterhorn summit.

The researchers first had to remove all the ambient noise from these data using machine learning and smart algorithms which doctoral students programmed directly into the wireless sensors. In order to test against ground truth they also fed the algorithms with data recorded at the Hörnlihütte, an alpine hut where mountaineers climbing the Matterhorn spend the night. The number of people staying overnight and climbing each serve as an indication when people climbing the mountain are creating interference.

Analysis of the filtered seismic data provide an interesting picture for Beutel: “The resonance frequencies that occur in the rocks vary considerably over the course of the year.” This phenomenon is linked to the freezing and thawing processes on the mountain. Many micro-cracks and fissures are filled with ice and sediment, and this mix is frozen rock-hard in the winter. When this thaws in the summer, the bonding in the fissures changes. The freely vibrating rock mass enlarges, and as a result the resonance frequency decreases. The reverse is happening in winter: the resonance frequency of the rock mass increases.

“It’s the same principle as on a guitar—the tone depends on where you grip the strings creating different length vibrating elements,” Beutel explains.

“Very abrupt changes in the pattern of these resonance frequencies would indicate that the stability of part of the rockface has changed,” Beutel says. If the frequencies drop, it may mean that existing fissures have deepened or opened up possibly indicating an emerging rockfall of a sizeable mass.

“Using seismic and acoustic data, combined with measurements of crack widths and photos of the investigation site, we can identify quite precisely how the permafrost is changing and make predictions about problems starting to develop,” Beutel says. “I consider this to be one of the best achievements to date of the PermaSense project.”

The measurement project on the Matterhorn is ongoing. While it is still running, Beutel is keen to transfer the know-how gained from the “Horu,” the local name for the iconic mountain, to other projects and sites.

The technical and geological expertise acquired can now be applied to the forecasting of natural hazard event. Beutel says one possible use might be at Piz Cengalo in the Bregaglia valley. In the summer of 2017 a massive rockfall of several million cubic meters killed a number of people and the resulting debris flow destroyed parts of the village of Bondo below. Experts agree that further rockfalls will happen on this mountain and are now monitoring conditions around the clock using radar but in-situ measurements are missing to date.

Additional researchers from ETH Zurich and several other institutions, including the Universities of Basel and Zurich, contributed to the work.

Sunlight and microbes in permafrost add carbon to atmosphere