Members of minority and lower-income populations are less likely to be eligible for hip or knee replacement surgery because they don’t meet rigid, unfairly applied hospital criteria for the operations, researchers say.

The requirements—in areas such as weight, blood sugar, and tobacco use—are designed to reduce complications and lower costs. But, they may also unintentionally deny members of minority and lower-income groups access to treatments that would improve their lives, researchers say.

The study appears in Clinical Orthopaedics and Related Research.

“Many doctors don’t realize that they are discriminating against minority groups and those of lower socioeconomic status by performing selective surgeries based on inflexible cutoffs,” says senior author Casey Humbyrd, assistant professor of orthopedic surgery at Johns Hopkins University School of Medicine.

“Our study was designed to show physicians that there are sometimes unintended consequences to their daily practices that play a role in shaping health disparities.” 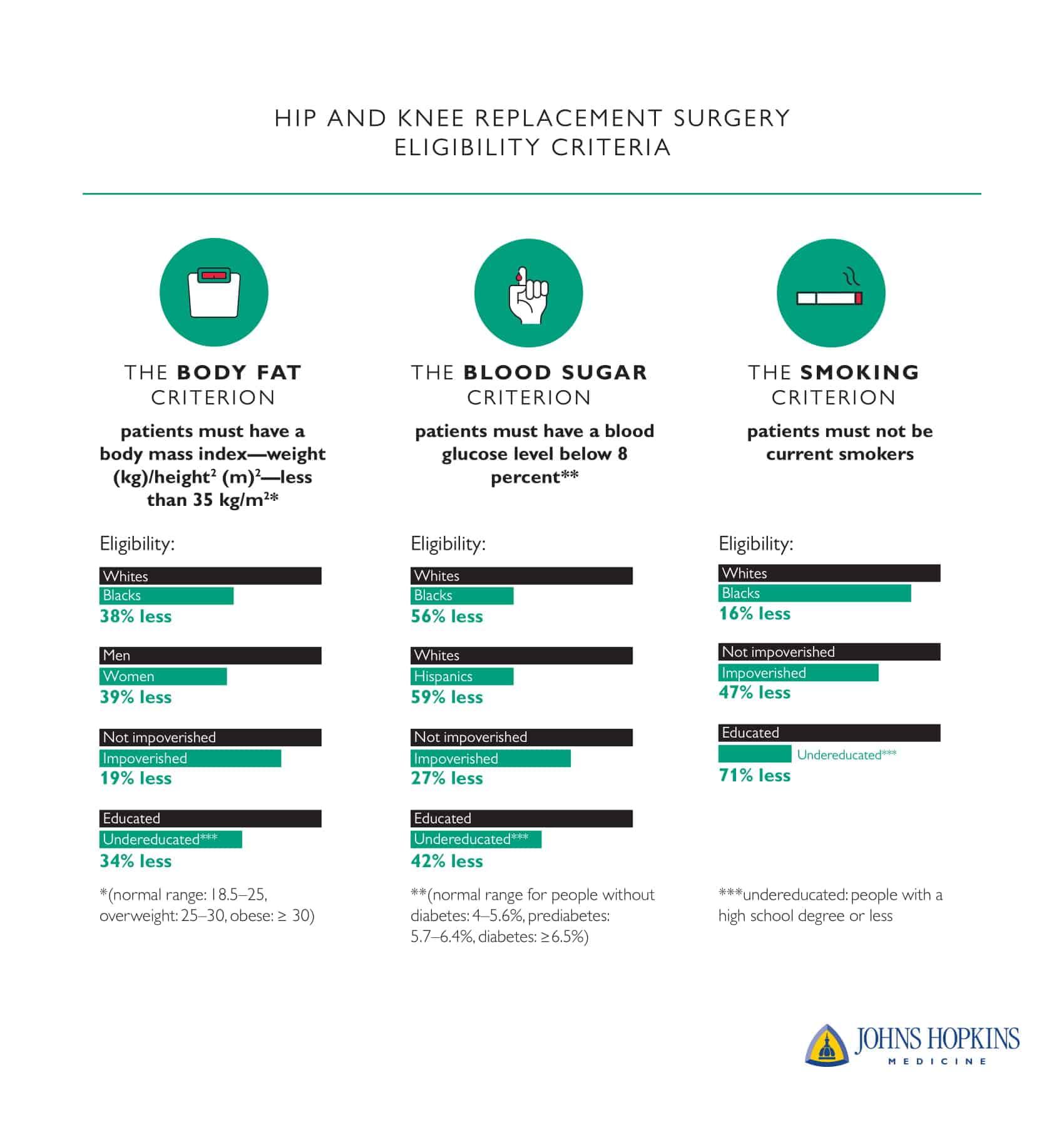 According to data from Nationwide Inpatient Sample, a database operated by a public/private partnership, more than 1 million hip and knee replacement surgeries occur annually in the United States. These surgeries improve health and patient quality of life, because people with untreated knee and hip problems are in more pain, are less mobile, and less able to work.

To cut costs and improve quality, hospitals set up eligibility criteria to prevent surgeries that statistically have worse outcomes and are considered high-risk. The criteria tend to exclude those diagnosed with at least severe obesity (a body mass index over 35), people with high blood sugar levels, and smokers.

“We need to give the decision-making power back to these patients and create a system to help them get care.”

Those risk factors are usually more prevalent in disadvantaged populations, researchers say. The study aimed to measure how these inflexible cutoffs would worsen health disparities and to identify the disadvantaged groups affected.

Researchers collected data from 21,294 adults over age 50 who took part in the National Health and Nutrition Examination Survey. Non-Hispanic whites made up 52 percent of the participants, and non-Hispanic blacks and Hispanics each accounted for around 20 percent.

The researchers didn’t know if the subjects needed hip or knee replacements or ultimately got them; the survey wasn’t set up to monitor for this. They applied the eligibility criteria to the whole population in the NHANES data and then analyzed how eligibility was distributed across racial and ethnic groups, males and females, people with an annual household income below or above $45,000, and people with an education level below or beyond high school.

Patients who met cutoff factors tended to have higher incomes, have more education, and be white.

“Applying broad eligibility criteria to minimize risk doesn’t work for everyone, and it unfairly affects minorities,” Humbyrd says. “A lot of people, especially vulnerable, often discriminated-against populations, don’t have access to the care they need. We need to give the decision-making power back to these patients and create a system to help them get care.”

The Johns Hopkins University School of Medicine Dean’s Summer Research Fund and the Department of Veterans Affairs funded the work.

Minorities are less likely to trust their doctors

Do doctors hold back when talking to minorities?