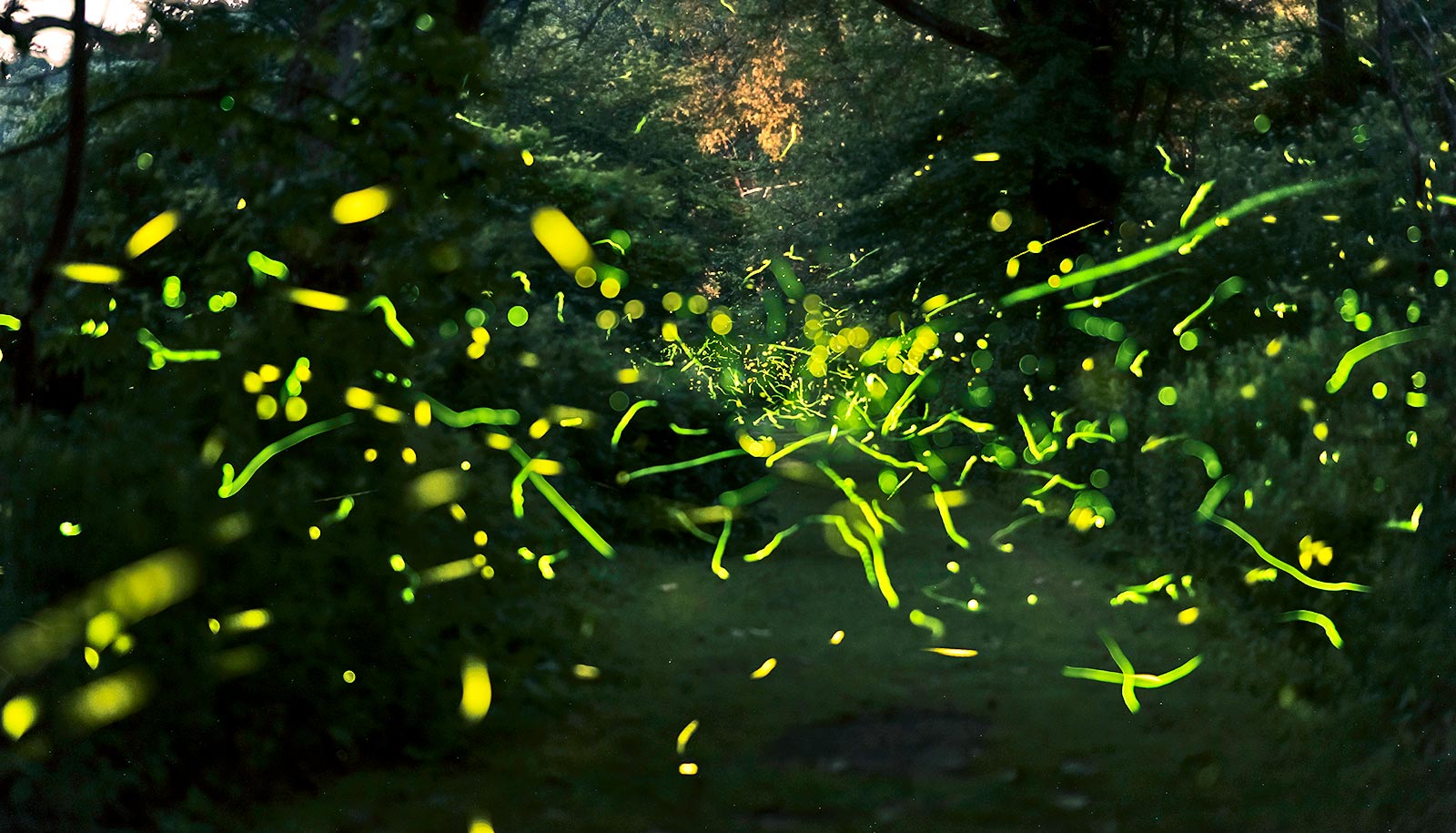 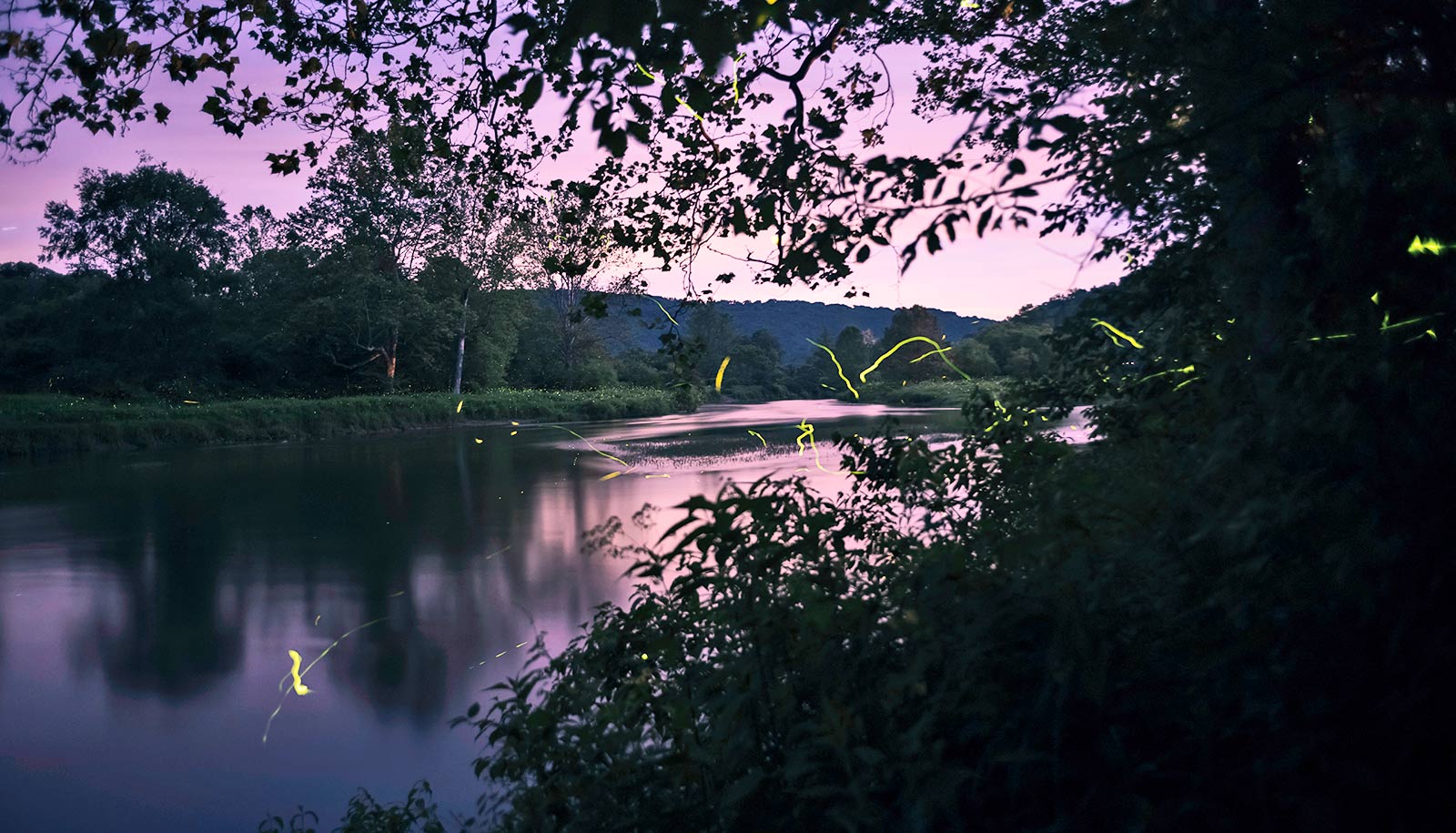 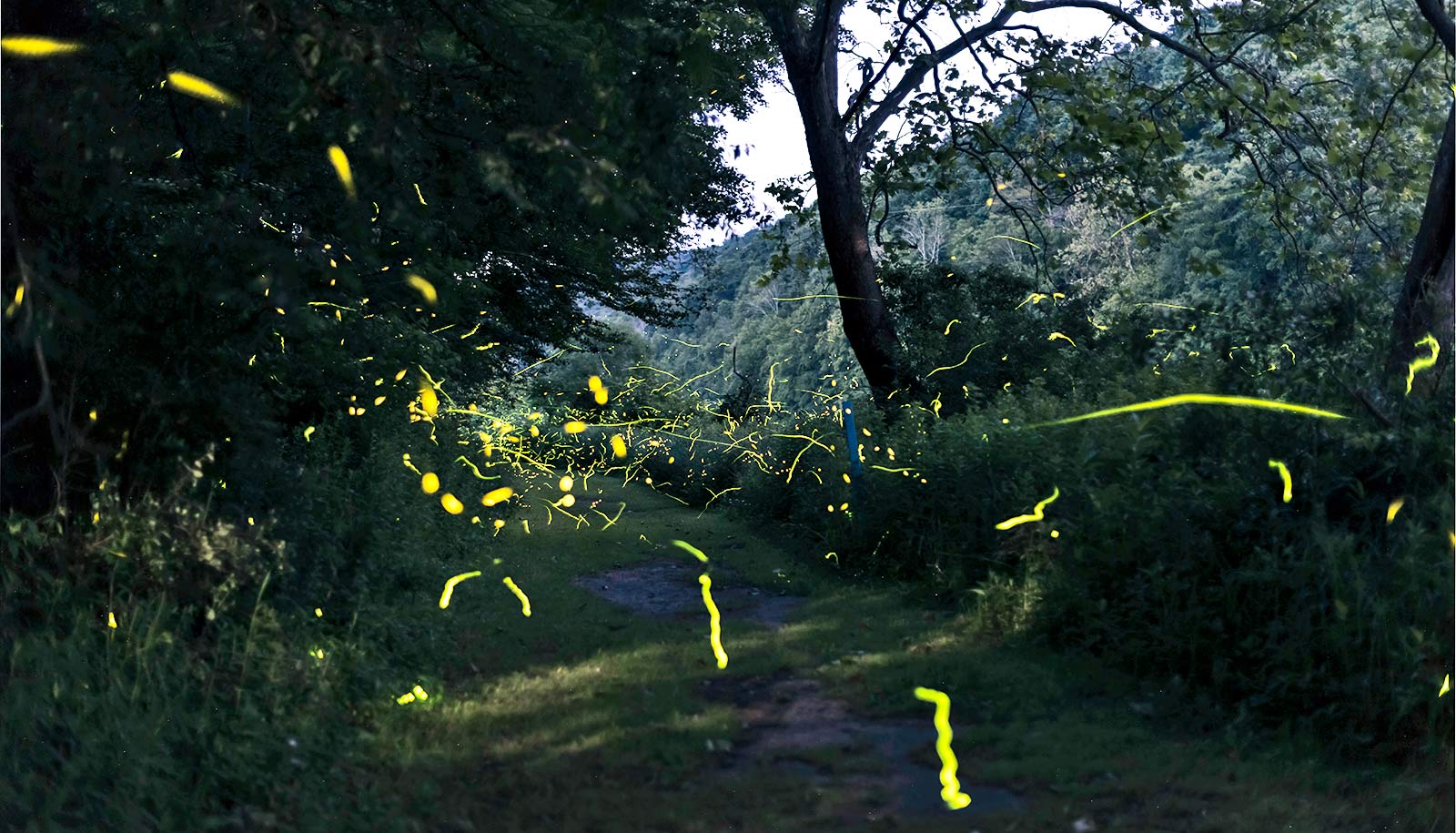 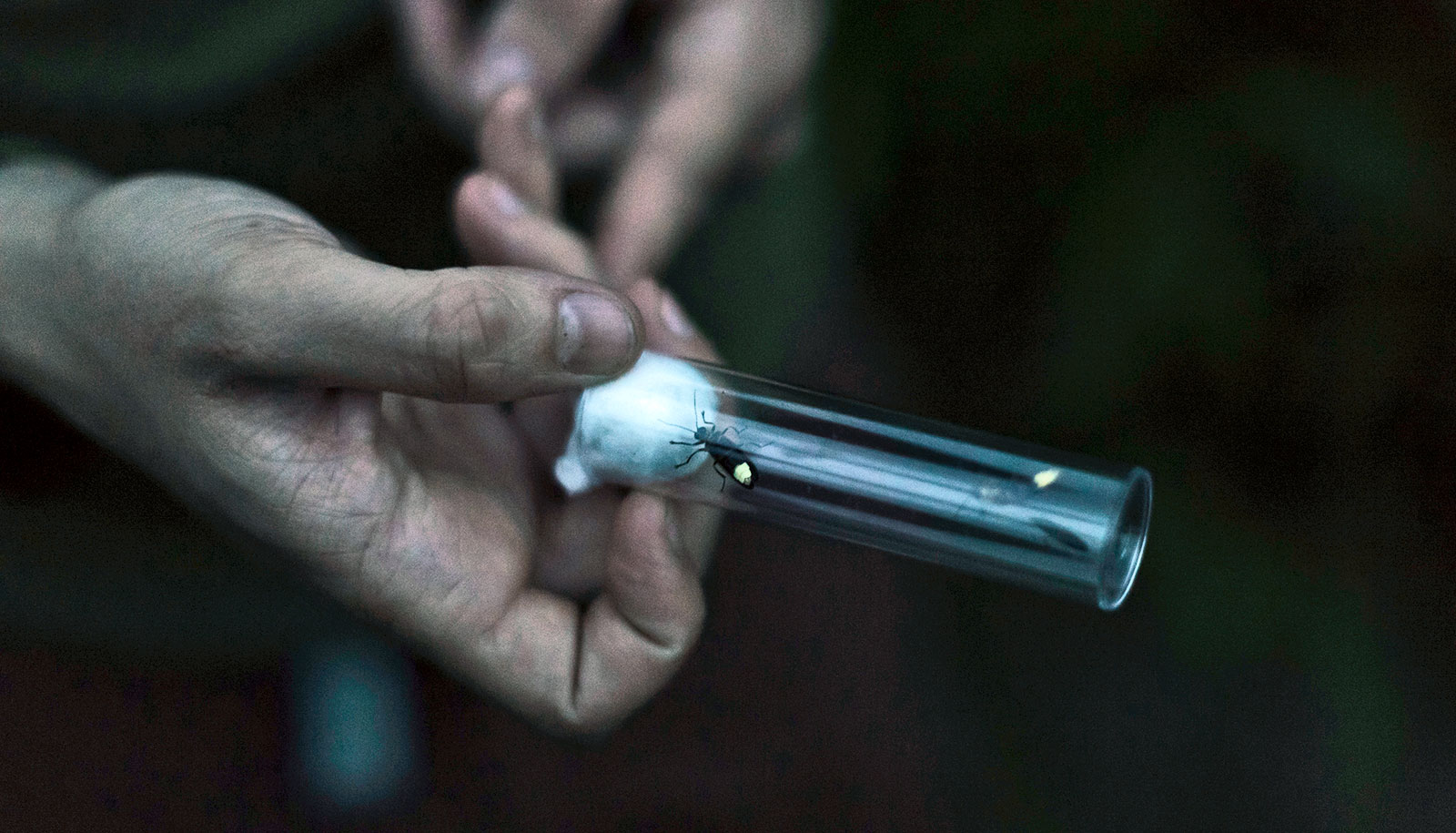 Biologist Vince Martinson holds a firefly in a tube by the Tionesta creek near Kellettville, PA on June 29, 2017. (Credit: J. Adam Fenster/U. Rochester) 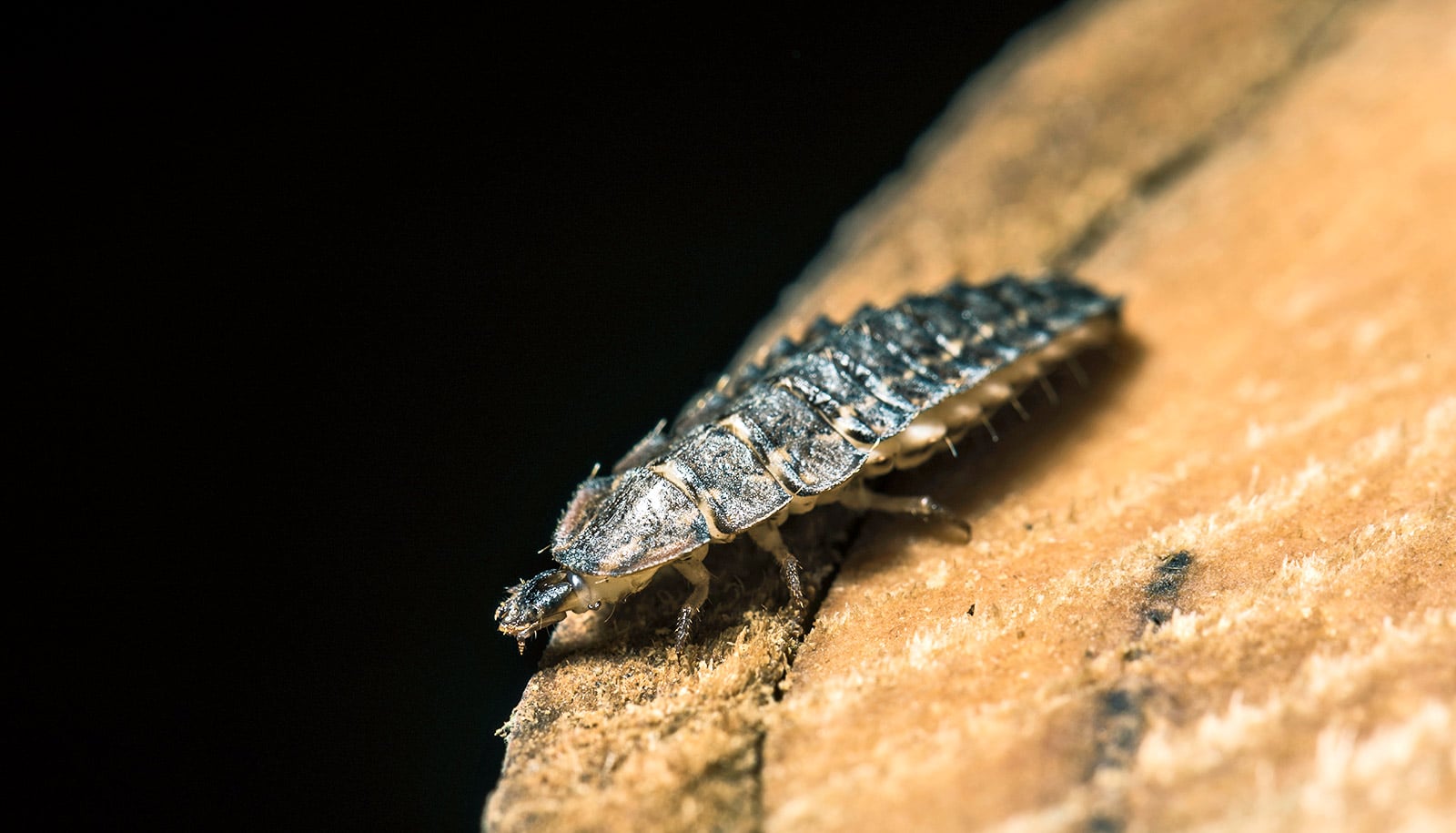 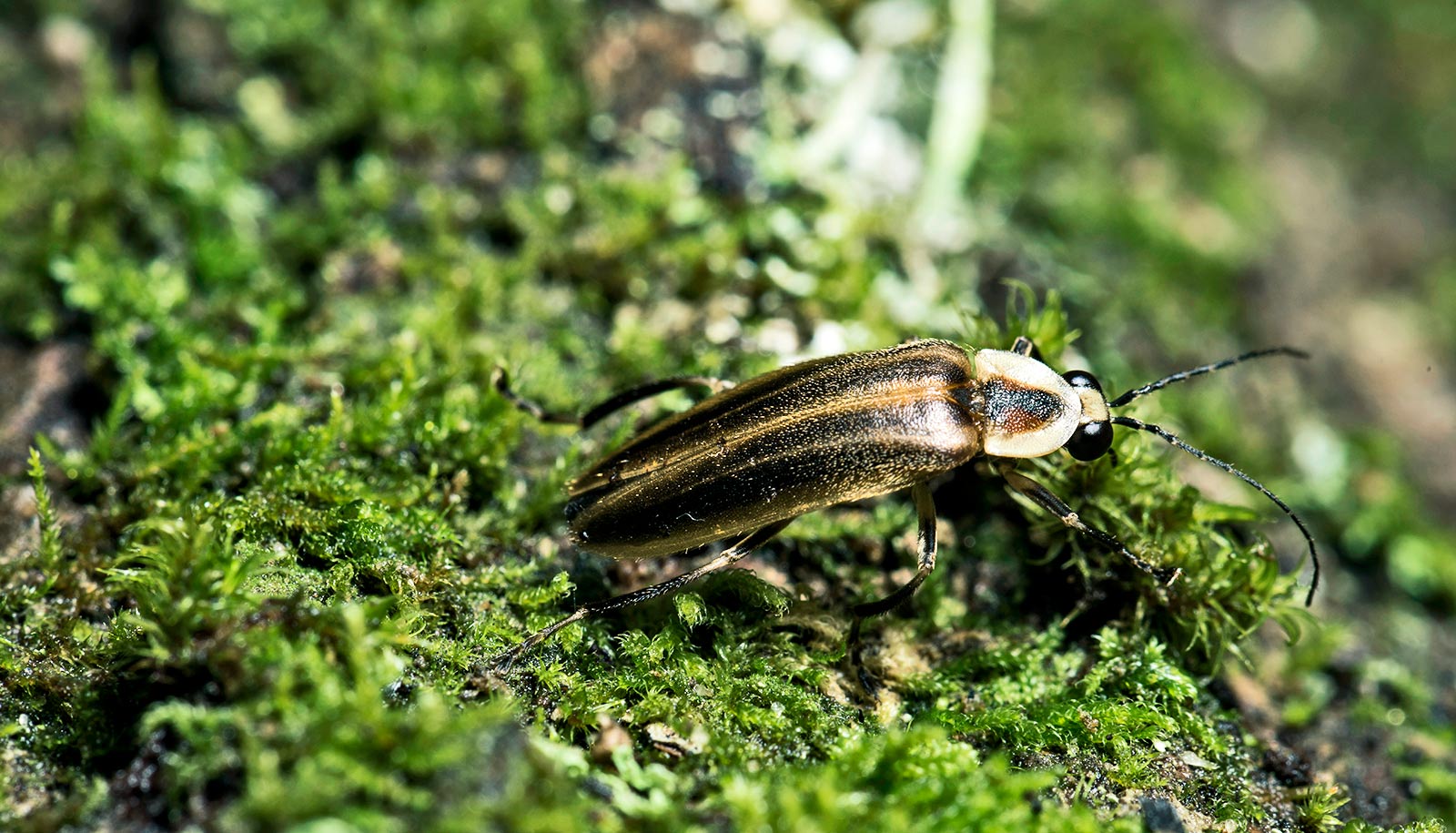 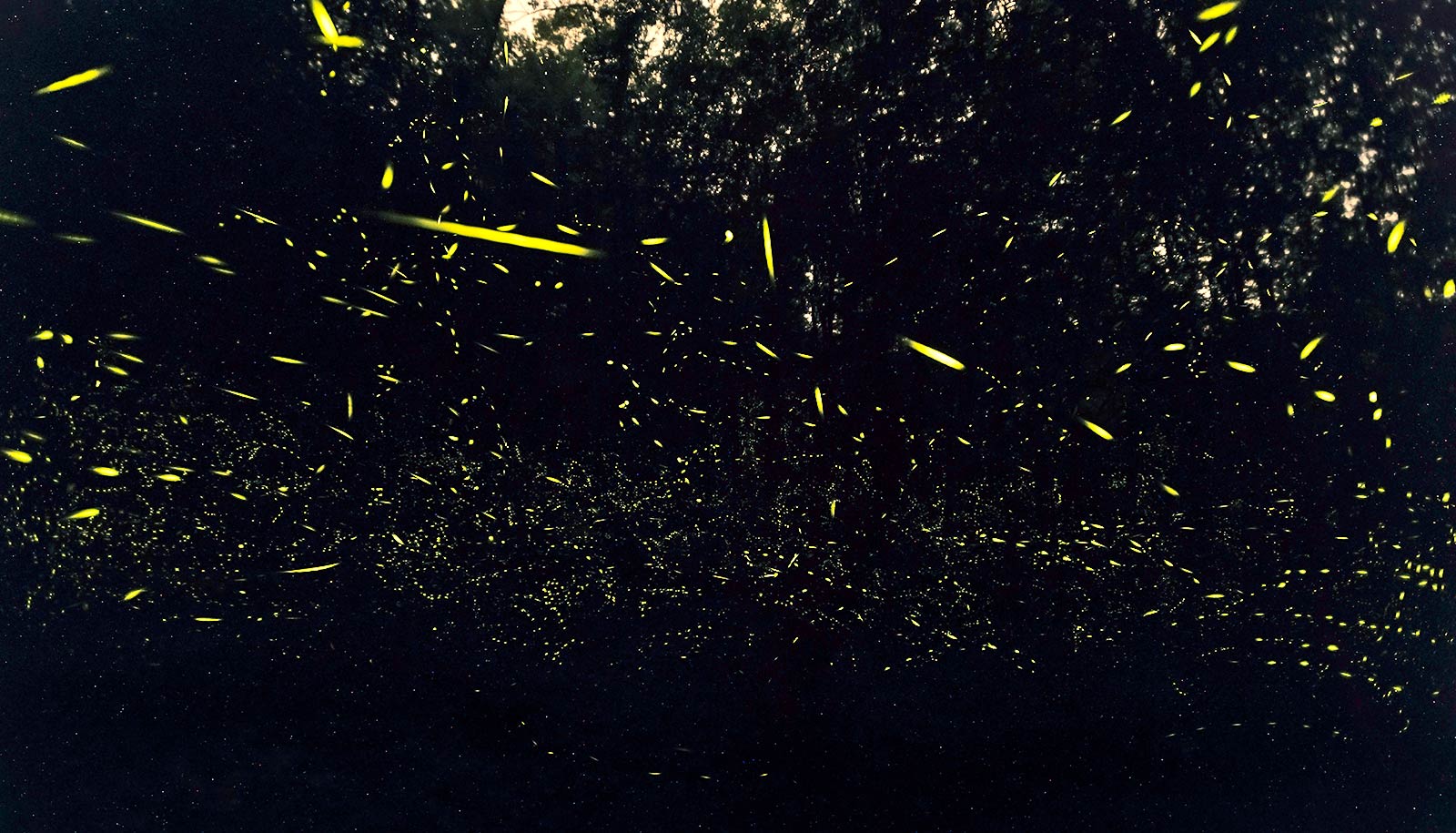 Scientists are working to map the genome of fireflies, research which could lead to medical applications like lighting up cancer cells.

Fireflies “are one of those iconic species that everyone can recognize and that are really special to a lot of people.”

Fireflies have long inspired wonder. Their flashbulbs of light blink in warm backyards as long summer days turn to night. But their presence is fleeting: as the summer comes to an end, so too does the population of fireflies.

That poses a challenge for researchers like Amanda Larracuente.

“Fireflies only tend to be out during the summer months in Rochester,” says Larracuente, an assistant professor of biology at the University of Rochester. “The end of summer is when we’re frantic about getting all our work done.”

Larracuente is a specialist in evolutionary genetics and genomics and has been involved in a project studying Photinus pyralis—or, the Big Dipper firefly. “In order to take pictures of the chromosomes,” she says, “we need wild fireflies.”

In 2016, Larracuente joined a group of biochemists, ecologists, and evolutionary biologists from multiple universities to enter the Big Dipper firefly into a contest for “the most interesting genome.” The competition, sponsored by the San Francisco-based company Pacific Biosciences, asked entrants to present a grant proposal explaining why the species they selected should have its genome sequenced. PacBio has developed a gene sequencing technology called single-molecule, real-time sequencing, or SMRT.

As it turned out, Photinus pyralis came in second place to Sedum alfredii Hance, a perennial, metal-devouring herb native to China. Pleased by the positive response, and undeterred by the narrow loss, Larracuente and her colleagues set up a crowdfund for the remainder of their project, and surpassed their goal of raising $10,000. The Photinus pyralis genome will be the topic of a paper they hope to publish this fall.

Fireflies are members of the beetle family and are found across the globe. They have many unique traits that make them a “most interesting” contender.

“Fireflies are such amazing creatures,” Larracuente says. “This is a group of organisms that is biomedically important because of the enzyme that produces their characteristic flashes of light. We use this enzyme in bioengineering and in genetics as tools to study human biology. Fireflies are also studied because of their ecology and evolution. Plus, they are one of those iconic species that everyone can recognize and that are really special to a lot of people.”

Until now, however, no one had successfully sequenced the firefly genome.

The genome is difficult to map because it’s full of repetitive DNA sequences that don’t seem to have an obvious purpose; they don’t code for any proteins and enzymes.

When Larracuente and her team sequence genomes, they extract DNA, fragment the DNA, sequence these fragments, and then use computational algorithms to assemble the fragments into a genome sequence. If the fragments contain DNA sequences that are repeated, it’s difficult to figure out where they should place the DNA in the genome.

In sequencing the Photinus pyralis genome, the team used PacBio’s SMRT technology. This technology allowed them to sequence longer fragments of DNA and more easily put the genome together in light of the repetitive sequences.

The abundance of repetitive DNA in genomes differs between species. Larracuente notes there are several possible explanations for these differences: some repeats accumulate randomly and some are “selfish genetic elements” that make extra copies of themselves so they will be more likely to be passed on to future generations.

“We’re working toward the goal of being able to look at a sequence or population and infer when natural selection is the driving force behind change, and when things are just random,” she says. “Right now we’re still trying to figure out the basic biology. What is this repetitive DNA? How does it mutate over time?”

Humans also have these repetitive strands of DNA. When cells “misbehave,” as in premature aging or cancer, these strands should hypothetically remain silenced. However, in cancer cells, for example, researchers find that these parts of the genomes are “on and going haywire,” Larracuente says. “We need to understand what this compartment of the genome is up to if we really want to understand whether that activity is a cause or consequence of cancer or premature aging.”

The researchers are also looking into the enzymes responsible for firefly bioluminescence. By mapping the firefly genome, the researchers gained more insight into the genes involved in the chemical reaction that produces the characteristic flashes of light that fireflies use to communicate, ward off predators, and find mates.

Understanding bioluminescence has potential biomedical applications for humans in areas such as noninvasively imaging the progression of cancer in the body.

“The luciferase gene, which encodes the enzyme for firefly bioluminescence, can be transferred from fireflies to other organisms, such as yeast or research models of cancer,” says Tim Fallon, a PhD candidate at the Massachusetts Institute of Technology, who collaborated with Larracuente on the firefly genome project.

“We can read out the expression of that gene by measuring the light that is produced by the luciferase enzyme. This could be used, for example, in determining quantity and spatial locations of cancer cells,” Fallon says.

Beyond any potential application, understanding bioluminescence should have wide appeal. Ellen Martinson, a postdoctoral researcher at Rochester, traveled this summer with a group of biology postdocs and graduate students to Allegheny, Pennsylvania.

Since 2012, Allegheny has hosted a Firefly Festival to coincide with a natural phenomenon in which members of a certain species of firefly—one only found in the Alleghany National Forest and the Great Smokey Mountains—blink in synchrony.

“This means that you can be standing in a forest so dark you cannot see your hand in front of your face one second and then you will be surrounded by flashing lights, only to be plunged back into darkness,” Martinson says. “It is one of the most amazing displays of nature that I have ever seen.”

When just a few termites take the bait, it kills the whole colony