U. NOTTINGHAM (UK) — New evidence suggests children with ADHD have trouble switching off the “daydreaming” regions in the brain that often interfere with concentration, particularly on tedious tasks.

Using a “Whac-a-Mole” style game, researchers found evidence from brain scans that children with ADHD require either much greater incentives—or their usual stimulant medication—to switch off those regions and focus on a task. The findings are published in the Journal of Child Psychology and Psychiatry.

“The results are exciting because for the first time we are beginning to understand how in children with ADHD incentives and stimulant medication work in a similar way to alter patterns of brain activity and enable them to concentrate and focus better,” says Chris Hollis, a professor of health sciences at the University of Nottingham. “It also explains why in children with ADHD their performance is often so variable and inconsistent, depending as it does on their interest in a particular task.”

Children with ADHD are excessively restless, impulsive, and distractible, often leading to difficulties at home and school. Previous studies have shown that these children have difficulty in switching off the default mode network (DMN) in their brains.

This network is usually active when we are doing nothing, giving rise to spontaneous thoughts or “daydreams”, but is suppressed when we are focused on the task before us. In children with ADHD, however, it is thought that the DMN may be insufficiently suppressed on “boring” tasks that require focused attention. 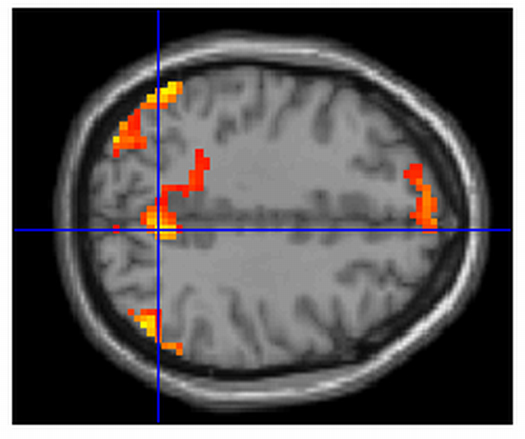 The active regions in this MRI scan pinpoint brain areas that the children with ADHD failed to deactivate during low-incentive tests, as compared with the control children, whose brain scans showed no difference between low- or high-incentive conditions. (Credit: University of Nottingham)

Researchers compared brain scans of 18 children with ADHD, between the ages of nine and 15 years old, against scans of a similar group of children without the condition as both groups took part in a task designed to test how well they were able to control their behavior.

Using MRI scans, they measured brain activity while the children played a computer game in which green aliens were randomly interspersed with less frequent black aliens, each appearing for a short interval. Their task was to “catch” as many green aliens as possible, while avoiding catching black aliens. For each slow or missed response, they would lose one point; they would gain one point for each timely response.

To study the effect of incentives, the reward for avoiding catching the black alien was then increased to five points, with a five-point penalty incurred for catching the wrong alien.

Brain scans showed that typically developing children switched off their DMN network whenever they saw an item requiring their attention. However, unless the incentive was high, or they had taken their medication, the children with ADHD would fail to switch off the DMN and would perform poorly.

This effect of incentives was not seen in children without ADHD—activity in their DMN was switched off by items requiring their attention regardless of the incentive on offer.

“Using brain imaging we have been able to see inside the children’s heads and observe what it is about ADHD that is stopping them concentrating. Most people are able to control their ‘daydreaming’ state and focus on the task at hand. This is not the case with children with ADHD,” says research collaborator Martin Batty.

“If a task is not sufficiently interesting, they cannot switch off their background brain activity and they are easily distracted. Making a task more interesting—or providing methylphenidate (known by the brand name Ritalin)—turns down the volume and allows them to concentrate,” adds Batty.

“These findings help explain one of the interesting characteristics of ADHD—that children with the condition appear able to control themselves much better when motivated to do so,” says researcher Elizabeth Liddle.

“The common complaint about children with ADHD is that ‘he can concentrate and control himself fine when he wants to’, so some people just think the child is being naughty when he misbehaves. We have shown that this may be a very real difficulty for them. The off-switch for their ‘internal world’ seems to need a greater incentive to function properly and allow them to attend to their task.”

The study was funded by the Wellcome Trust.

Healthiest noise level for the office is about 50 decibels