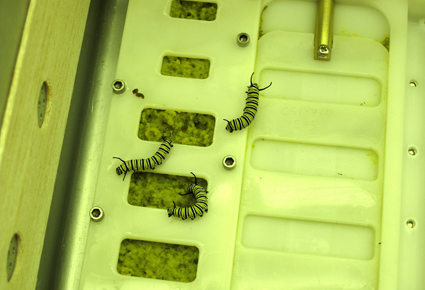 Without ordinary gravity, the caterpillars chose unpredictable surfaces for pupation and then curled into tight “C” shapes with the head of the caterpillar brought close to the abdomen, rather than assuming the normal “J” shape. The microgravity environment appeared to influence the insects increasingly as their development progressed. (Credit: Jim Lovett/Monarch Watch)

U. KANSAS (US)—A recent trip into low-Earth orbit has shown just how much monarch butterflies depend on gravity.

A trio of caterpillars from the University of Kansas spent more than 25 days at the International Space Station, becoming the first of their species in space.

“We wanted to try to learn as much as we could about this insect and how it functions in space,” explains Chip Taylor, professor of ecology and evolutionary biology and director of Monarch Watch, a University of Kansas-based network of students, teachers, volunteers, and researchers.

“This is an insect that seems to use gravity a lot. It has orientation features that indicate that gravity is very important for it.”

The three caterpillars fed, molted, pupated, emerged, and finally expired in an experimental habitat, influenced by microgravity at every stage, Taylor says.

“The results indicate that pupation and emergence were strongly affected in the near-weightless conditions aboard the ISS.”

Without ordinary gravity, the caterpillars chose unpredictable surfaces for pupation and then curled into tight “C” shapes with the head of the caterpillar brought close to the abdomen, rather than assuming the normal “J” shape.

The microgravity environment appeared to influence the insects increasingly as their development progressed.

“Although all three caterpillars were able to shed their skin, in two cases the skin formed a cap at the end of the abdomen and the cremaster was not withdrawn from this skin and inserted into the silk pad,” says Taylor.

“The third caterpillar did shed its skin but failed to attach to the silk pad and became the first floating pupa.”

Upon emerging from the chrysalises without normal gravitational forces, the butterflies had to force the wings to assume a flat aspect.

“Pumping fluid into the wings did not seem to be sufficient in itself for the monarchs to extend their wings directly over their backs,” says Taylor.

“The process, which normally takes three minutes, took at least 15 minutes and the new adults kept moving most of this period, often from side-to-side — a kind of a rocking motion. During most of this time, the wings folded back on themselves.”

Two of the butterflies were able to expand their wings, not perfectly, but well enough so that if on Earth, they would have been able to fly. The wings of the last butterfly to emerge did not form normally.

“This deformity might have been due to the imperfect form of the chrysalis as much as to the conditions in space,” explains Taylor.

Observations of the insects opens doors to fresh questions and new areas of inquiry, Taylor says.

“The overall results and the well-known patterns of monarch behavior on Earth indicate that monarchs have a sense of gravity,” he explains.

“This conclusion raises the most interesting question of all: How do monarch caterpillars and adults sense gravity and where is the gravity sensor—or sensors—located?

“Is it possible that gravity sensors in adults are different from those in larvae?”