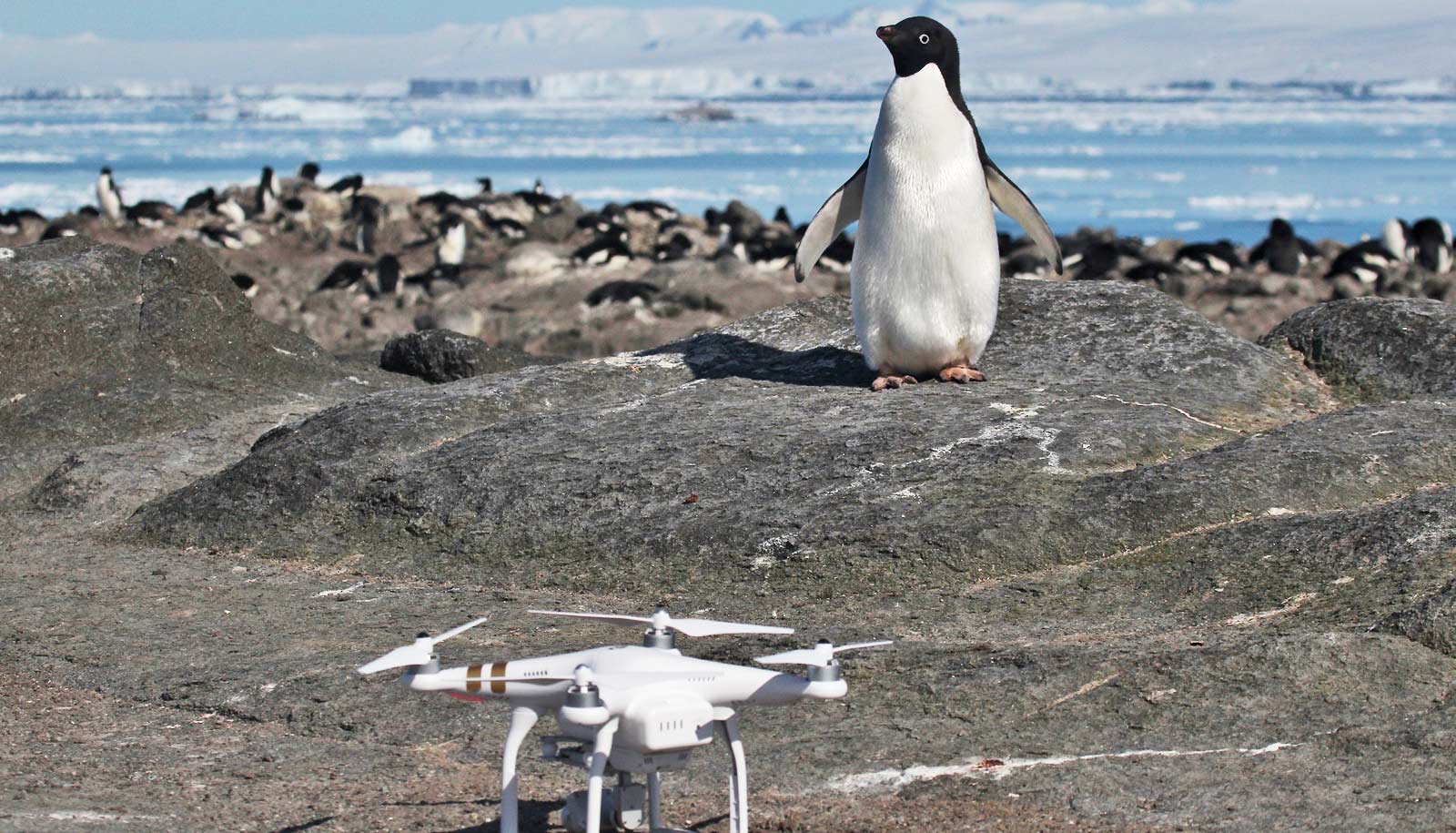 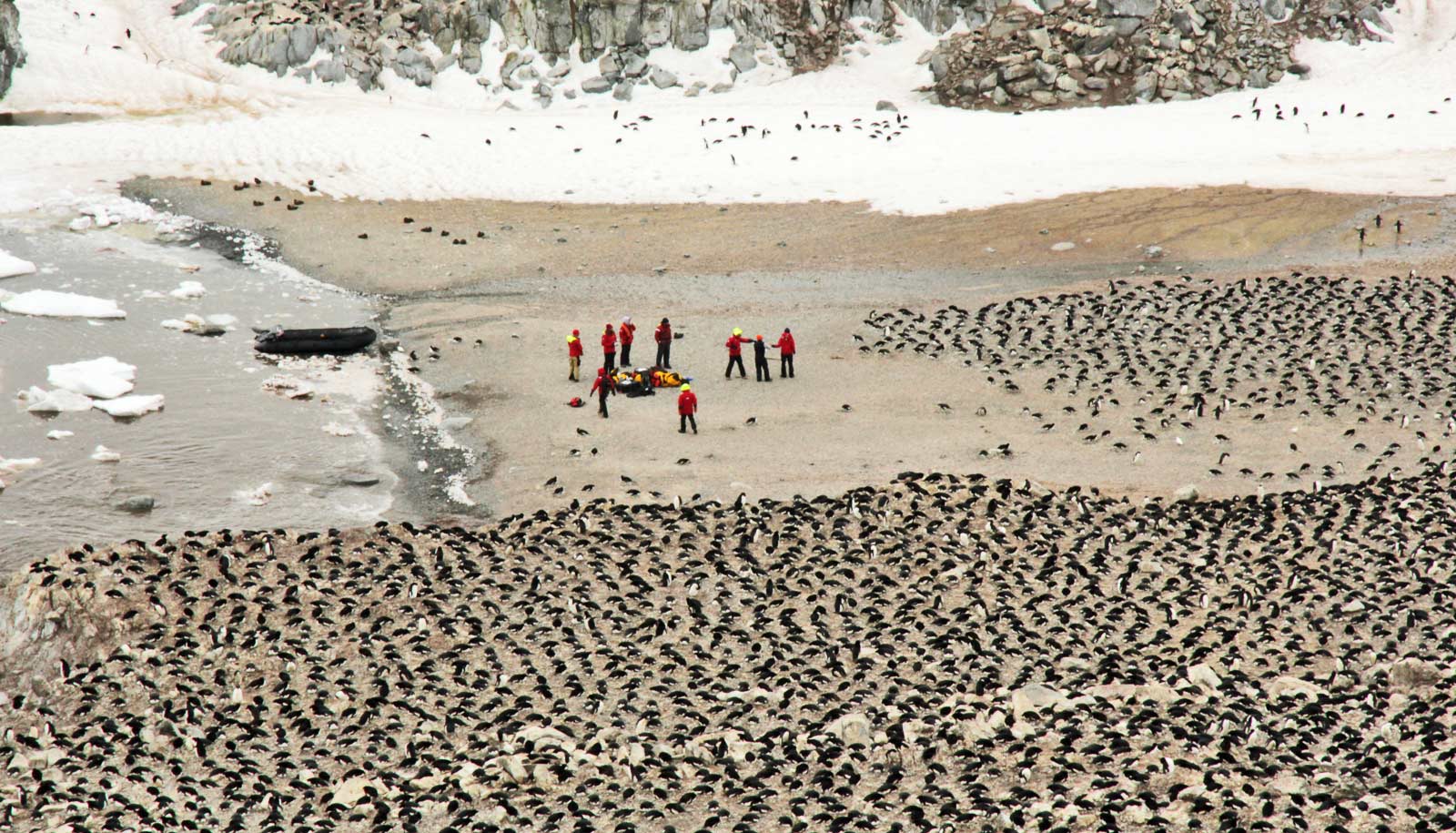 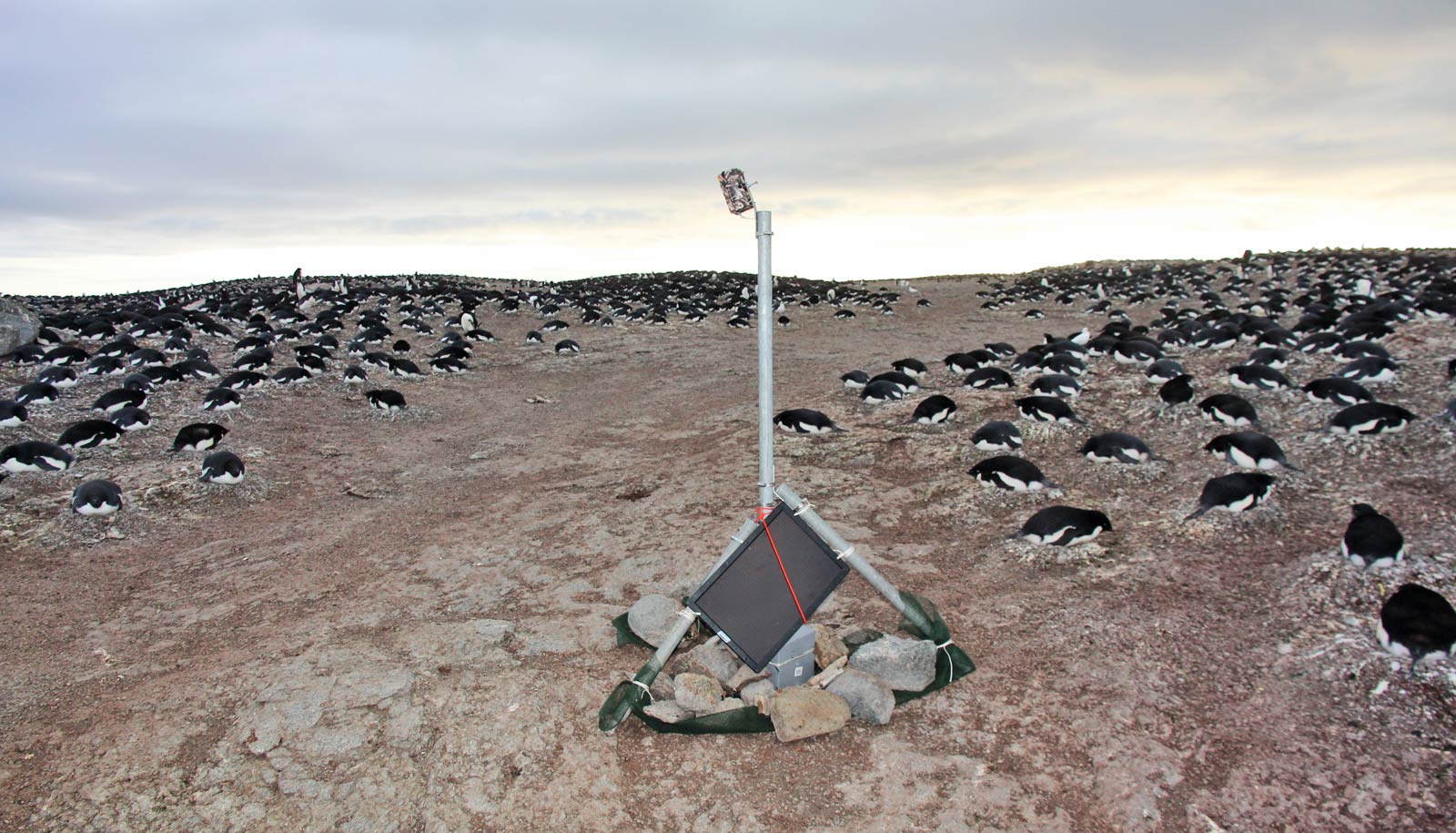 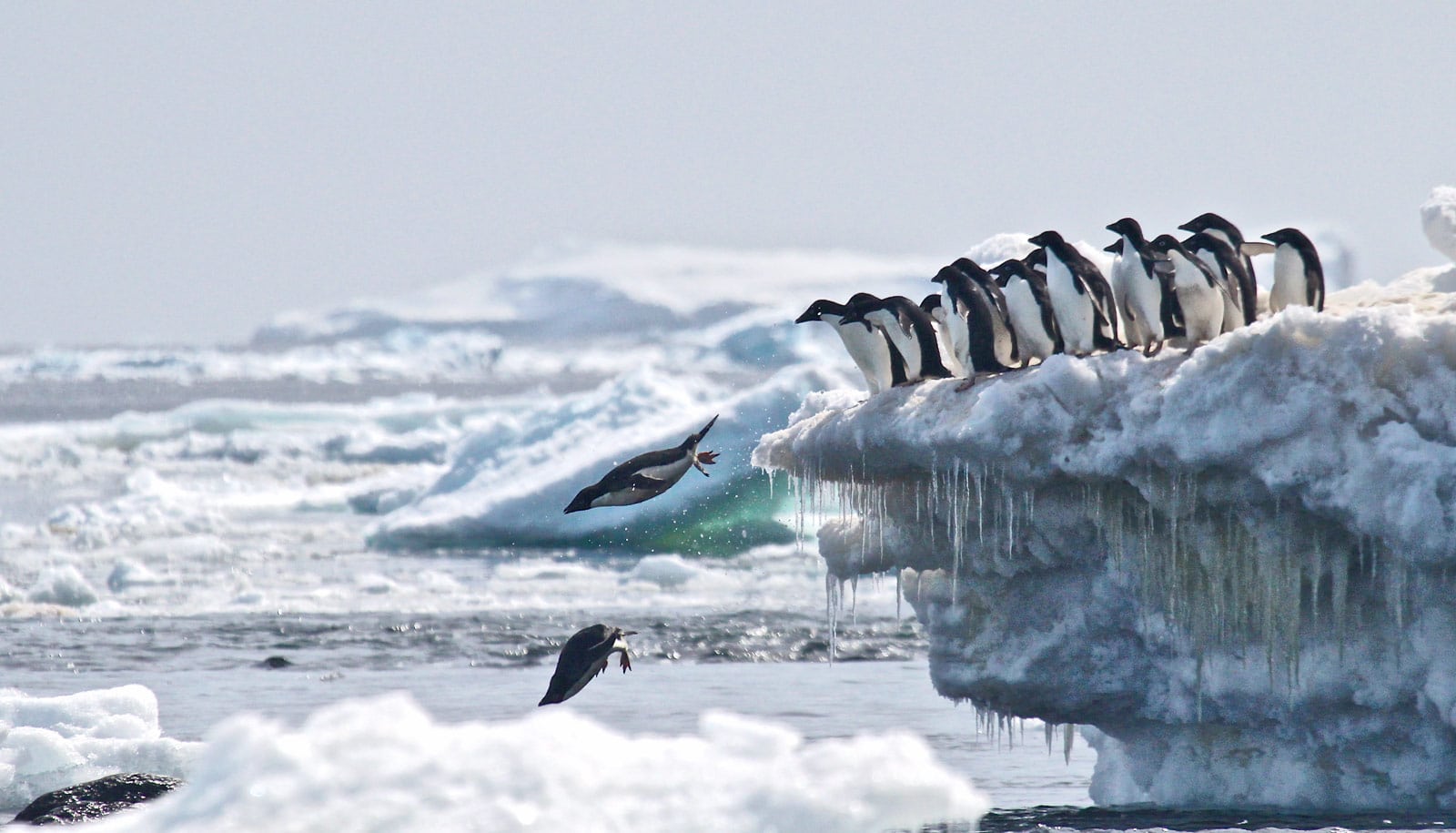 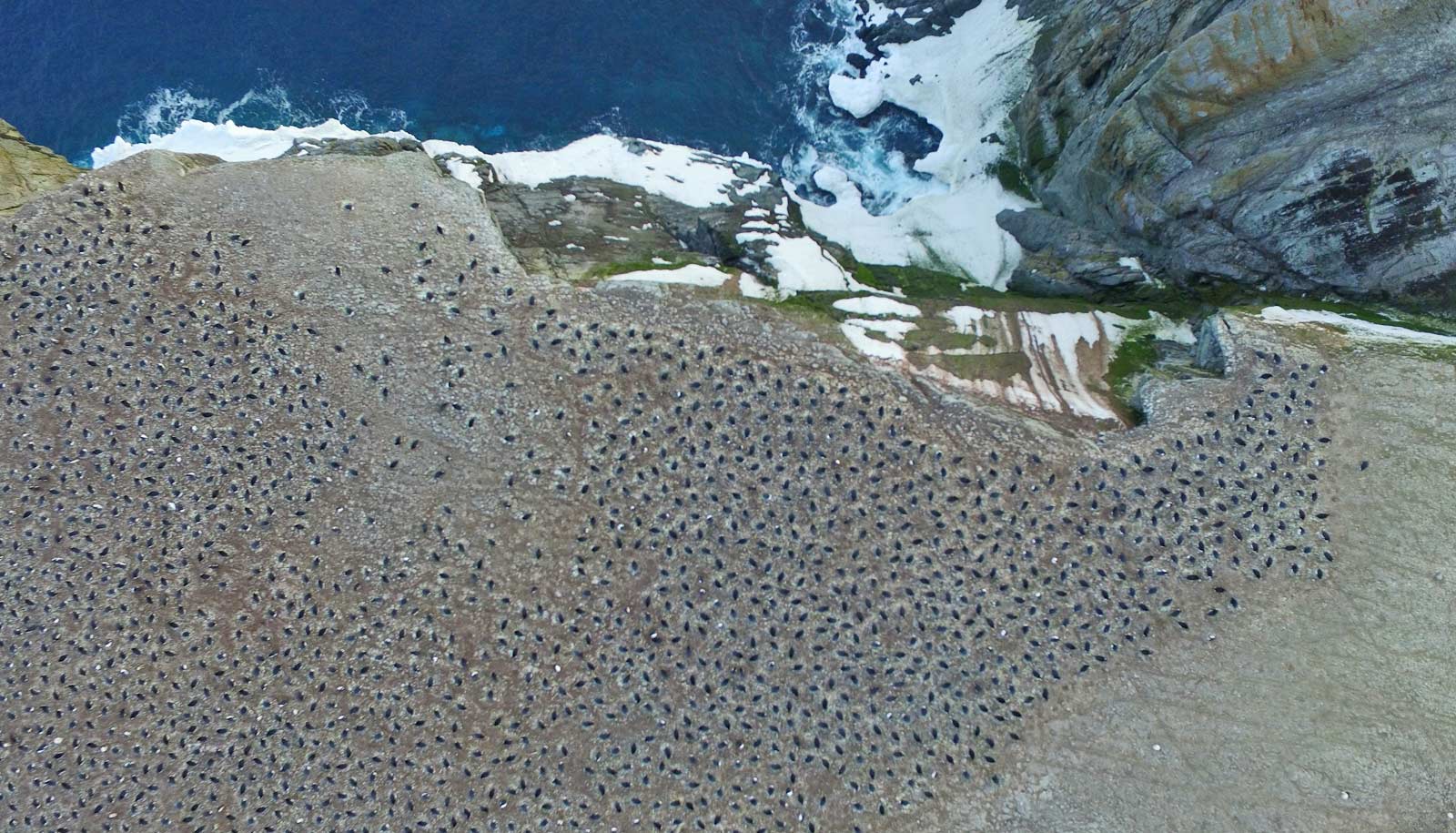 Scientists recently discovered a “supercolony” of more than 1,500,000 Adélie penguins in the Danger Islands, a chain of remote, rocky islands off the Antarctic Peninsula’s northern tip.

For the past 40 years, the total number of Adélie penguins, one of the most common on the Antarctic peninsula, has been steadily declining—or so biologists thought.

“Until recently, the Danger Islands weren’t known to be an important penguin habitat,” says Heather Lynch, associate professor of ecology & evolution at Stony Brook University and senior author of the paper in Scientific Reports.

“Now that we know how important this area is for penguin abundance, we can better move forward designing Marine Protected Areas in the region and managing the Antarctic krill fishery,” Lynch says.

In 2014, Lynch and colleague Mathew Schwaller from NASA discovered telltale guano stains in existing NASA satellite imagery of the islands, hinting at a mysteriously large number of penguins.

To find out for sure, researchers arranged an expedition to the islands with the goal of counting the birds firsthand.

When they arrived in December 2015, they found hundreds of thousands of birds nesting in the rocky soil, and immediately started to tally up their numbers. They also used a modified commercial quadcopter drone to take images of the entire island from above.

“The drone lets you fly in a grid over the island, taking pictures once per second. You can then stitch them together into a huge collage that shows the entire landmass in 2D and 3D,” says Hanumant Singh, professor of mechanical and industrial engineering at Northeastern University, who developed the drone’s imaging and navigation system.

Once those massive images are available, he says, his team can use neural network software to analyze them, pixel by pixel, searching for penguin nests autonomously.

Is the Adélie population  “…linked to the extended sea ice condition over there? Food availability? That’s something we don’t know.”

The accuracy that the drone allowed was key, says coauthor Michael Polito, from Louisiana State University and a guest investigator at the Woods Hole Oceanographic Institution (WHOI).
The number of penguins in the Danger Islands could provide insight not just on penguin population dynamics, but also on the effects of changing temperature and sea ice on the region’s ecology.

Being able to get an accurate count of the birds in this supercolony offers a valuable benchmark for future change, as well, says Stephanie Jenouvrier, a seabird ecologist at WHOI.

“The population of Adélies on the east side of the Antarctic Peninsula is different from what we see on the west side, for example. We want to understand why. Is it linked to the extended sea ice condition over there? Food availability? That’s something we don’t know.”

Penguins may not be the best way to track ocean health

It will also lend valuable evidence for supporting proposed Marine Protected Areas (MPAs) near the Antarctic Peninsula, adds Mercedes Santos, from the Instituto Antártico Argentino (who is not affiliated with this study but is one of the authors of the MPA proposal) with the Commission for the Conservation of the Antarctic Marine Living Resources, an international panel that decides on the placement of MPAs.

“Given that MPA proposals are based in the best available science, this publication helps to highlight the importance of this area for protection.”