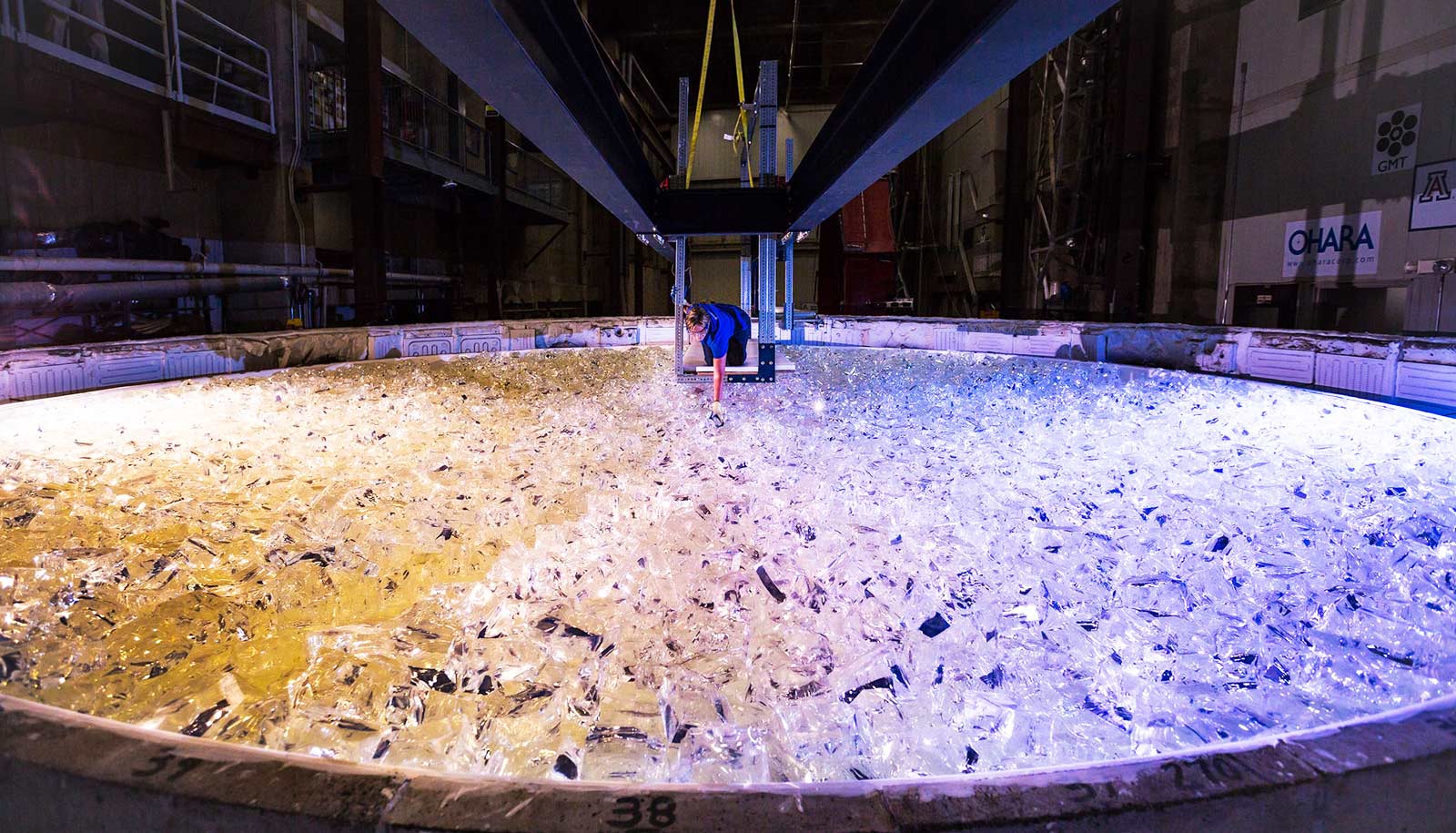 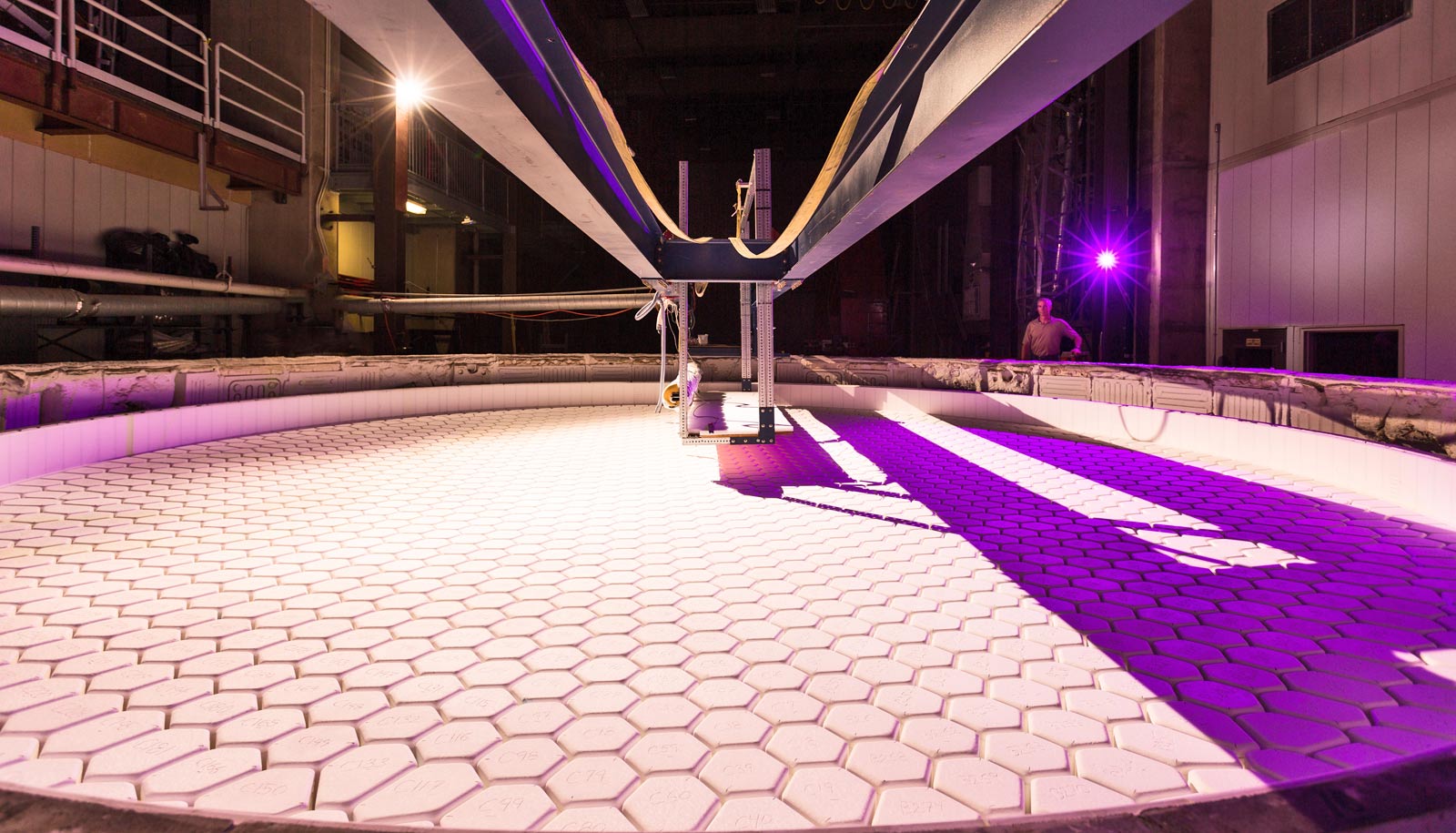 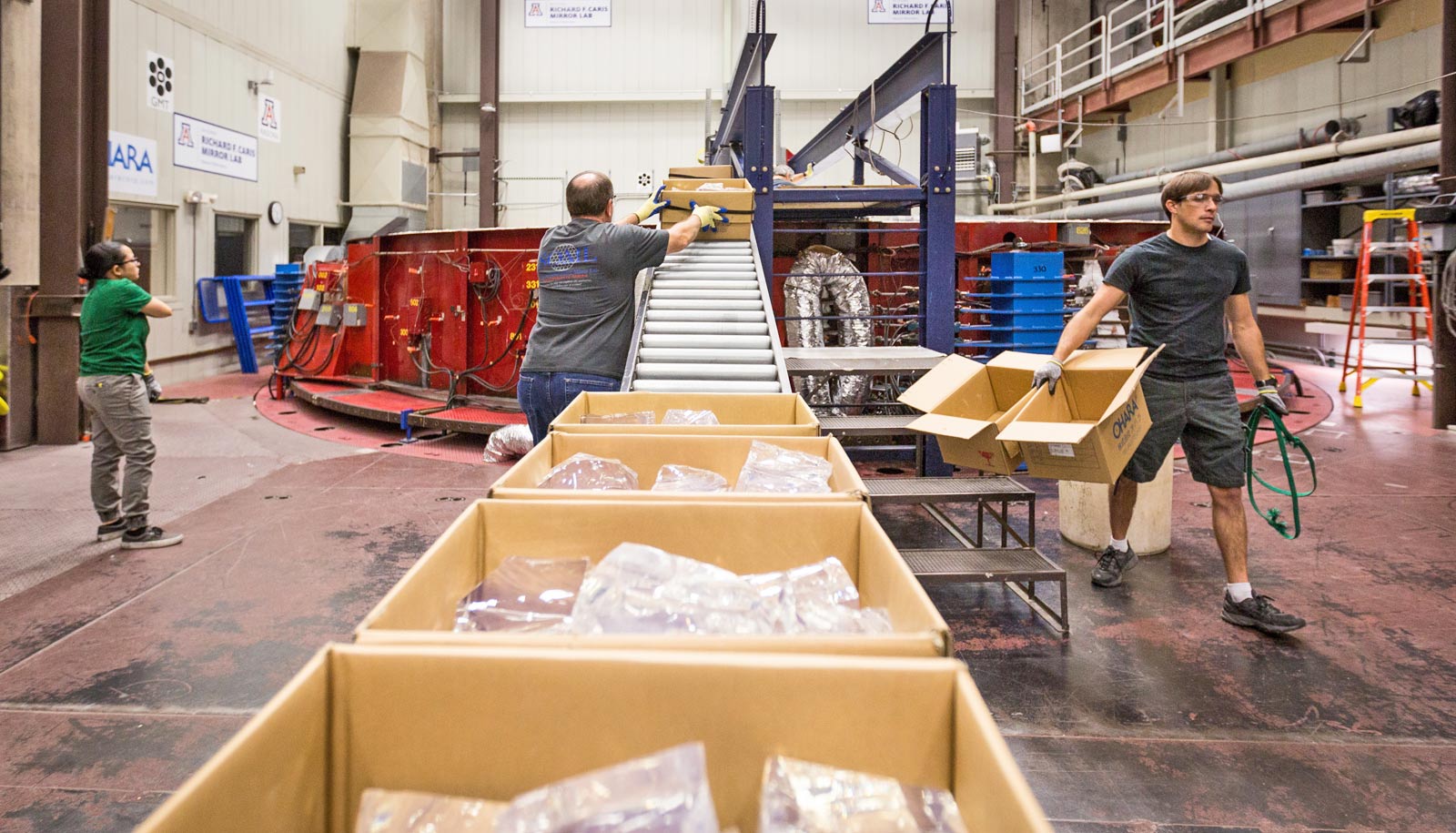 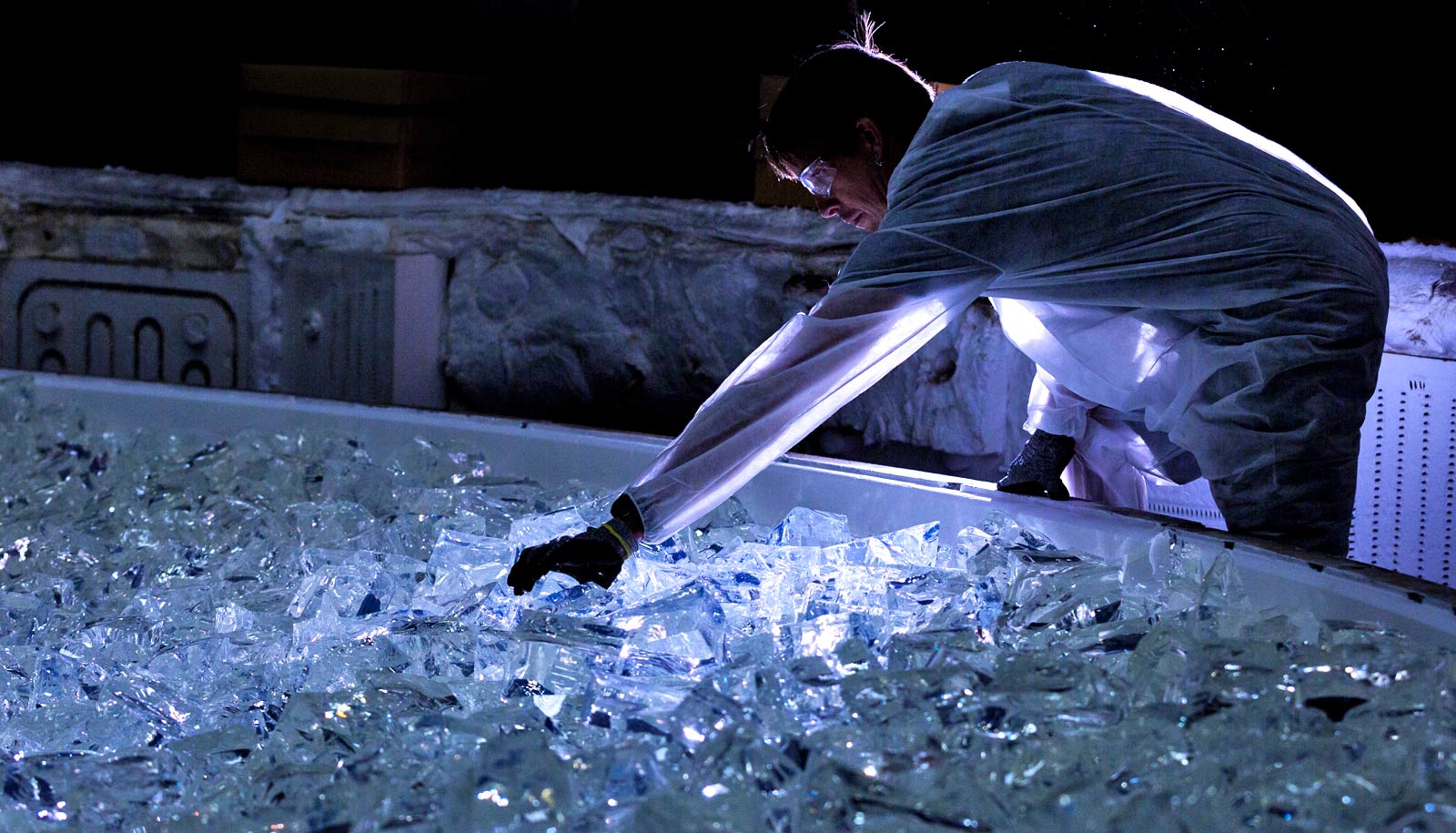 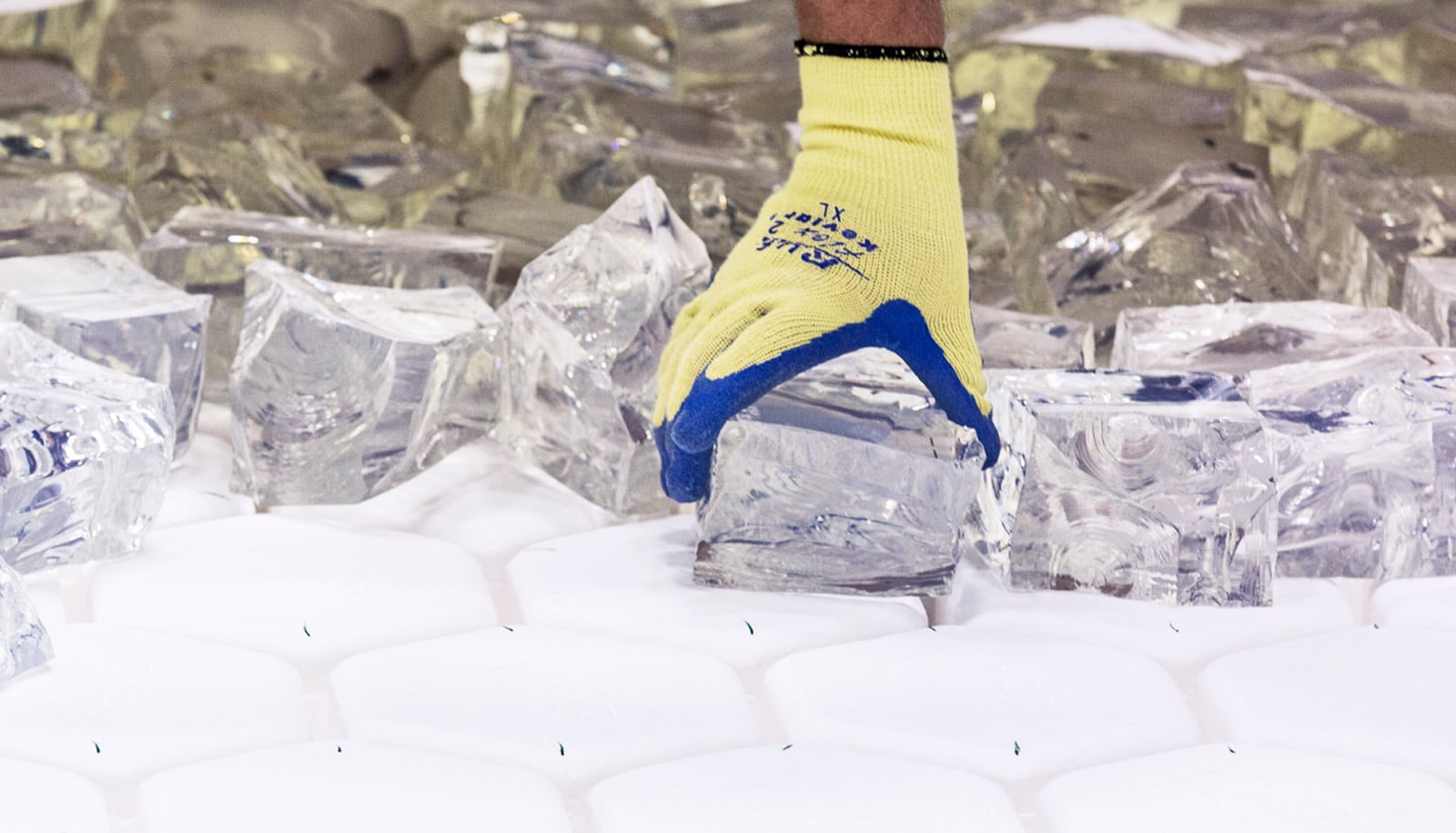 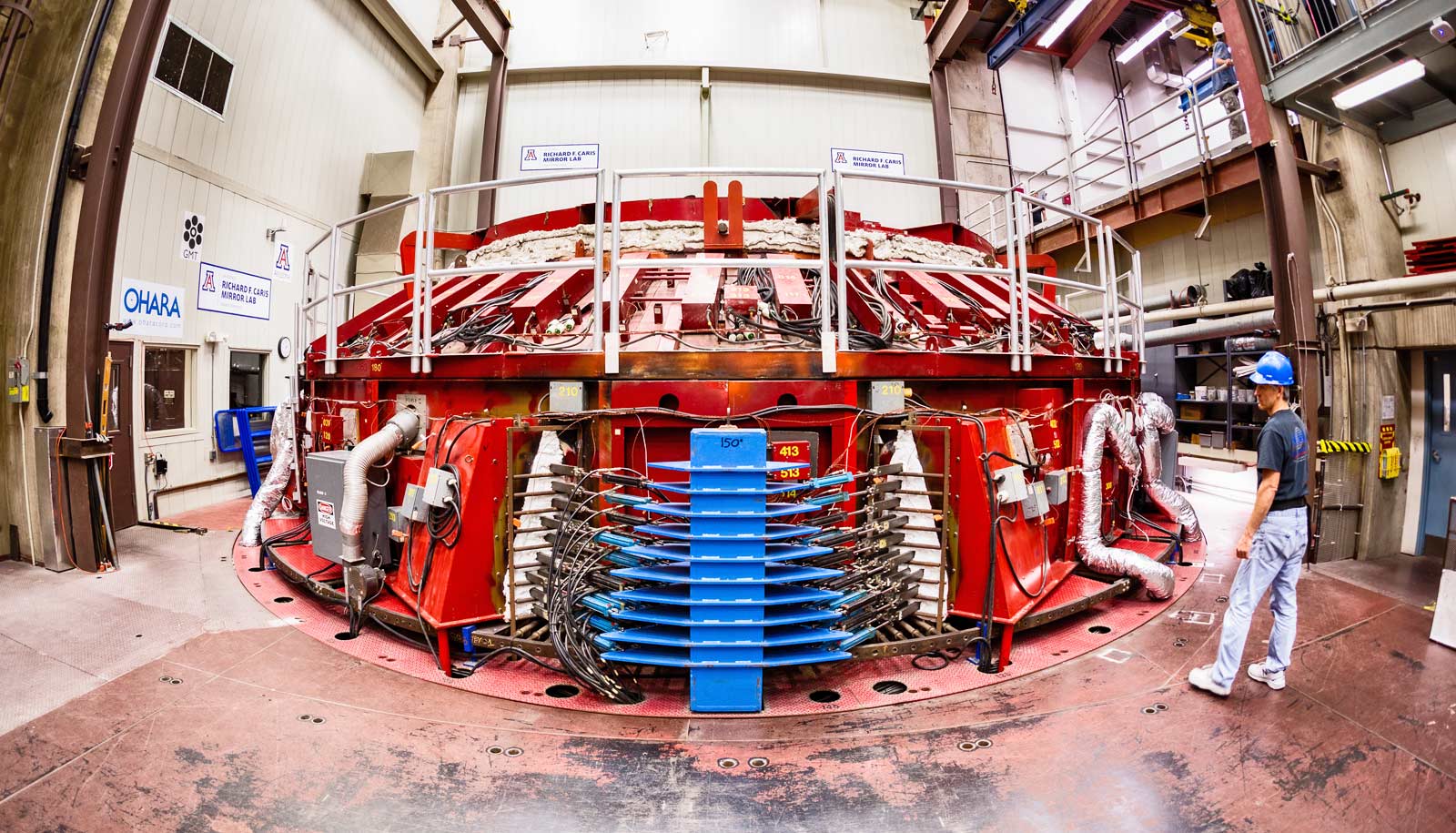 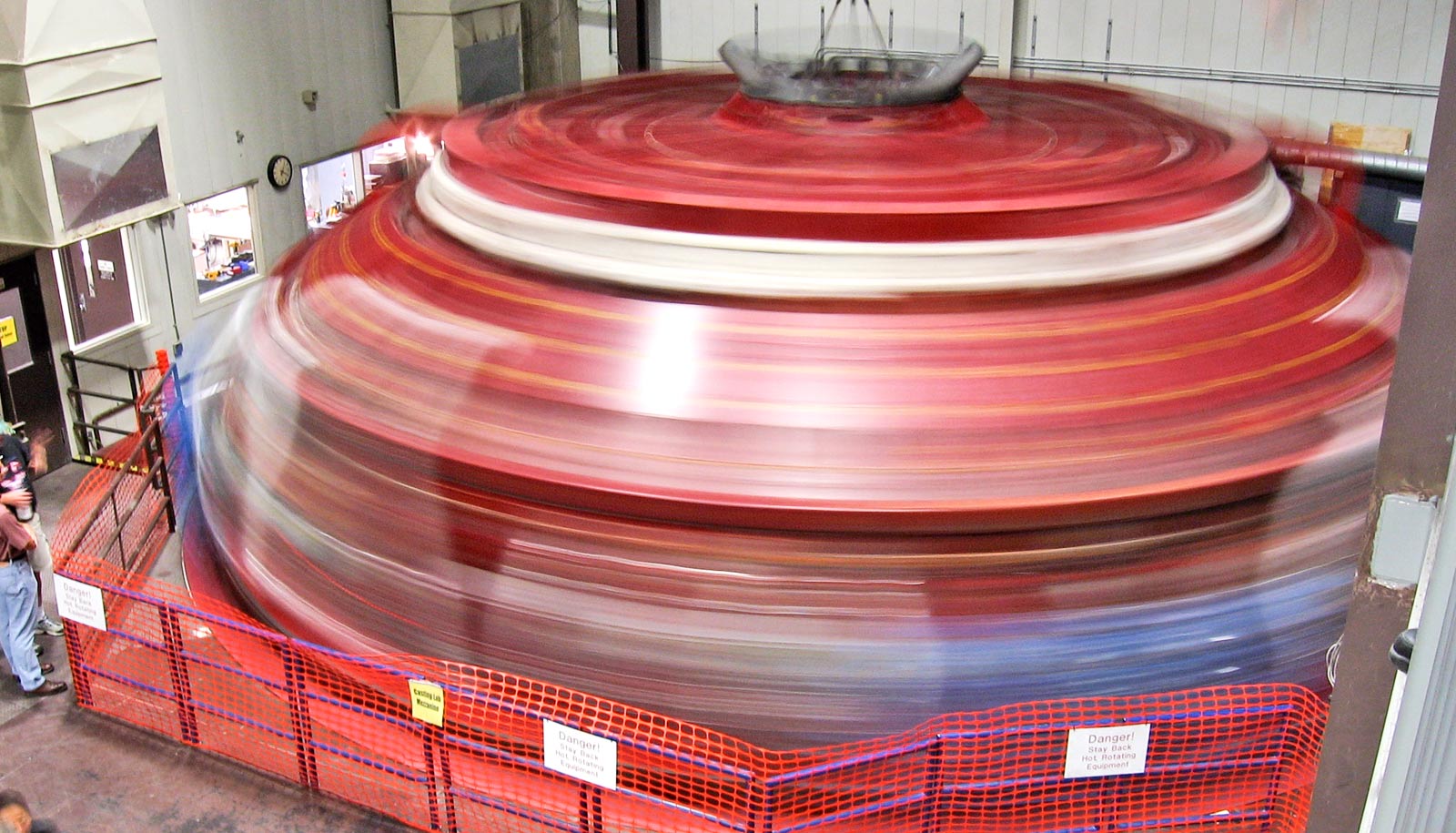 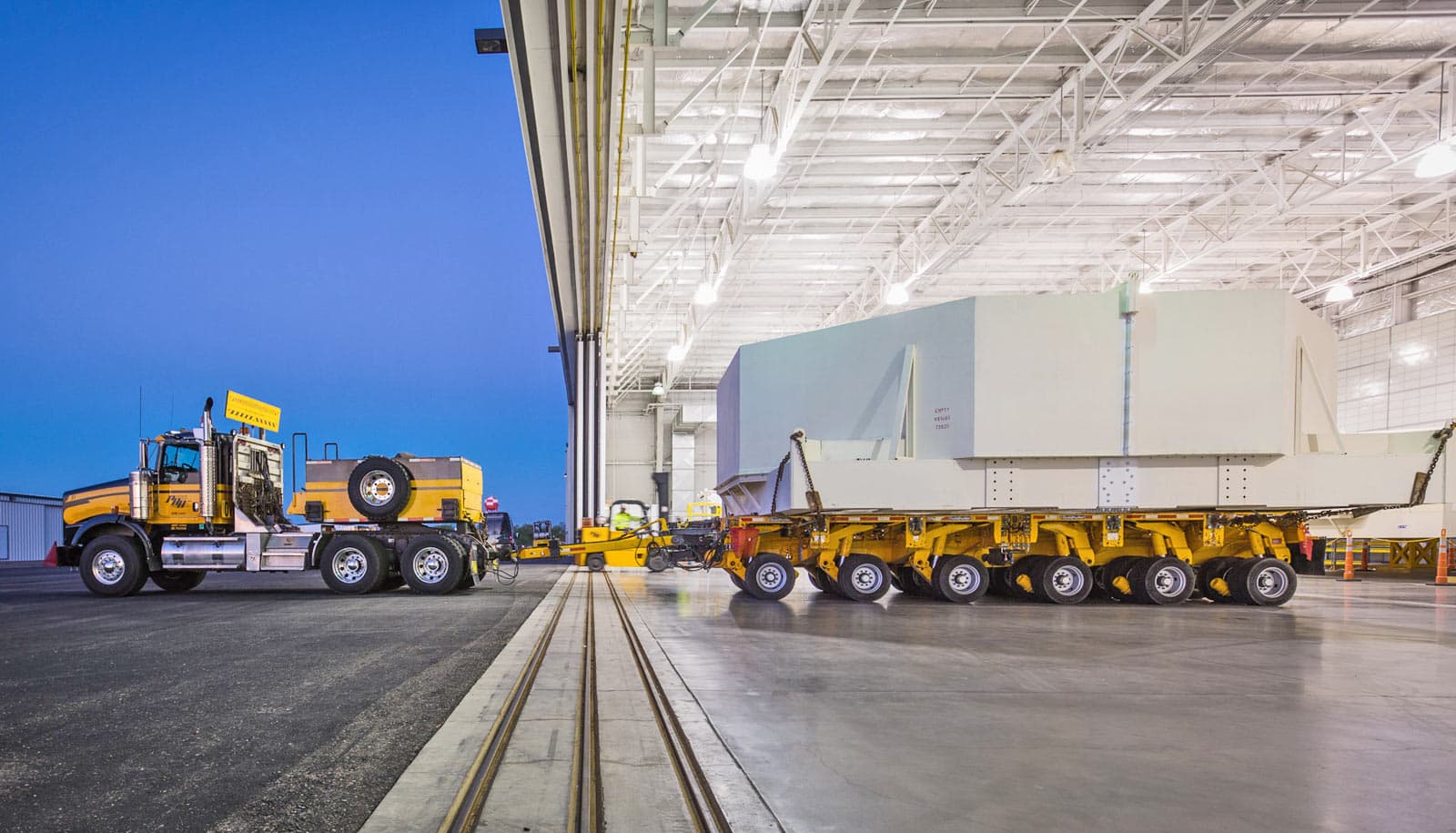 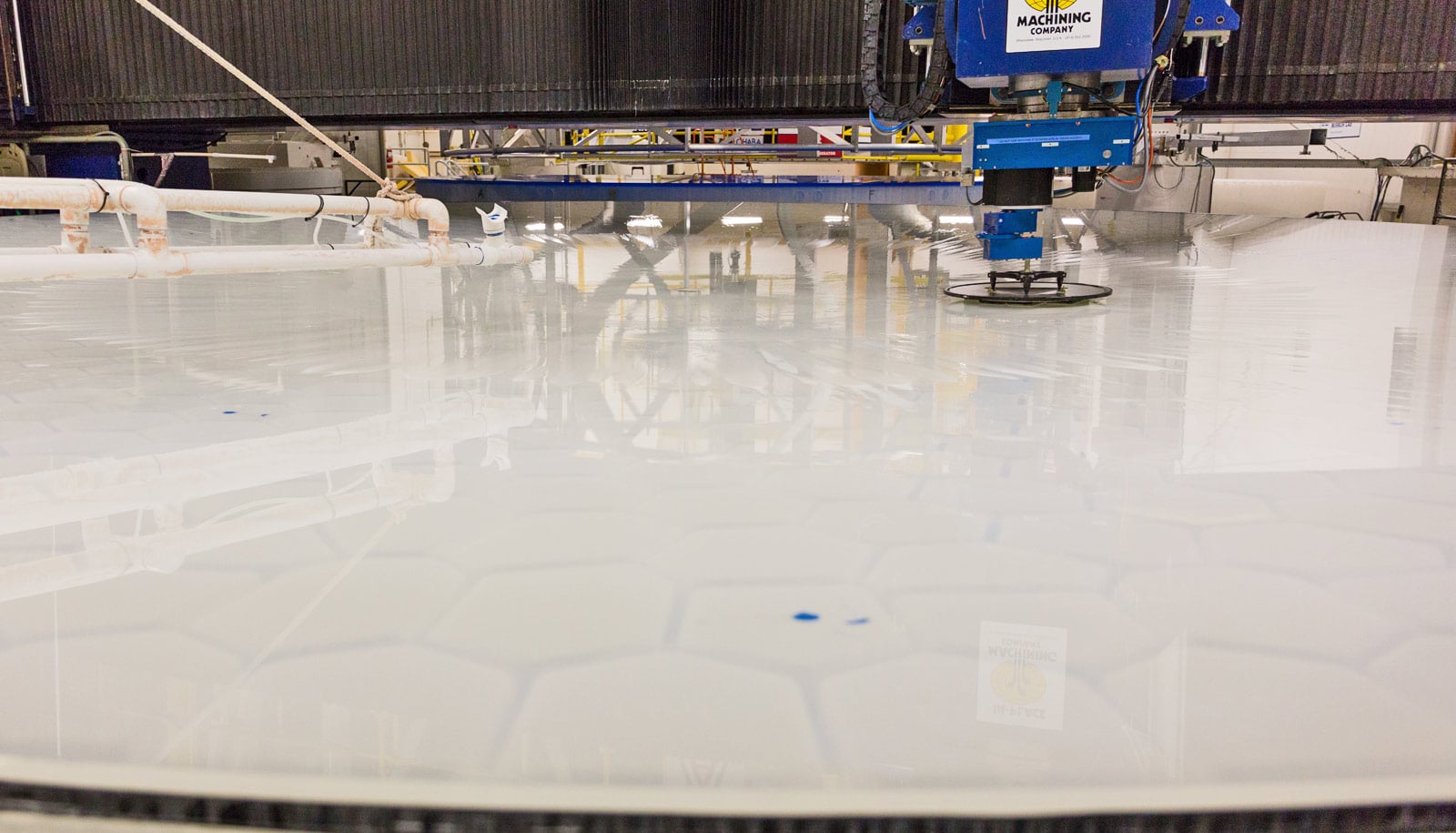 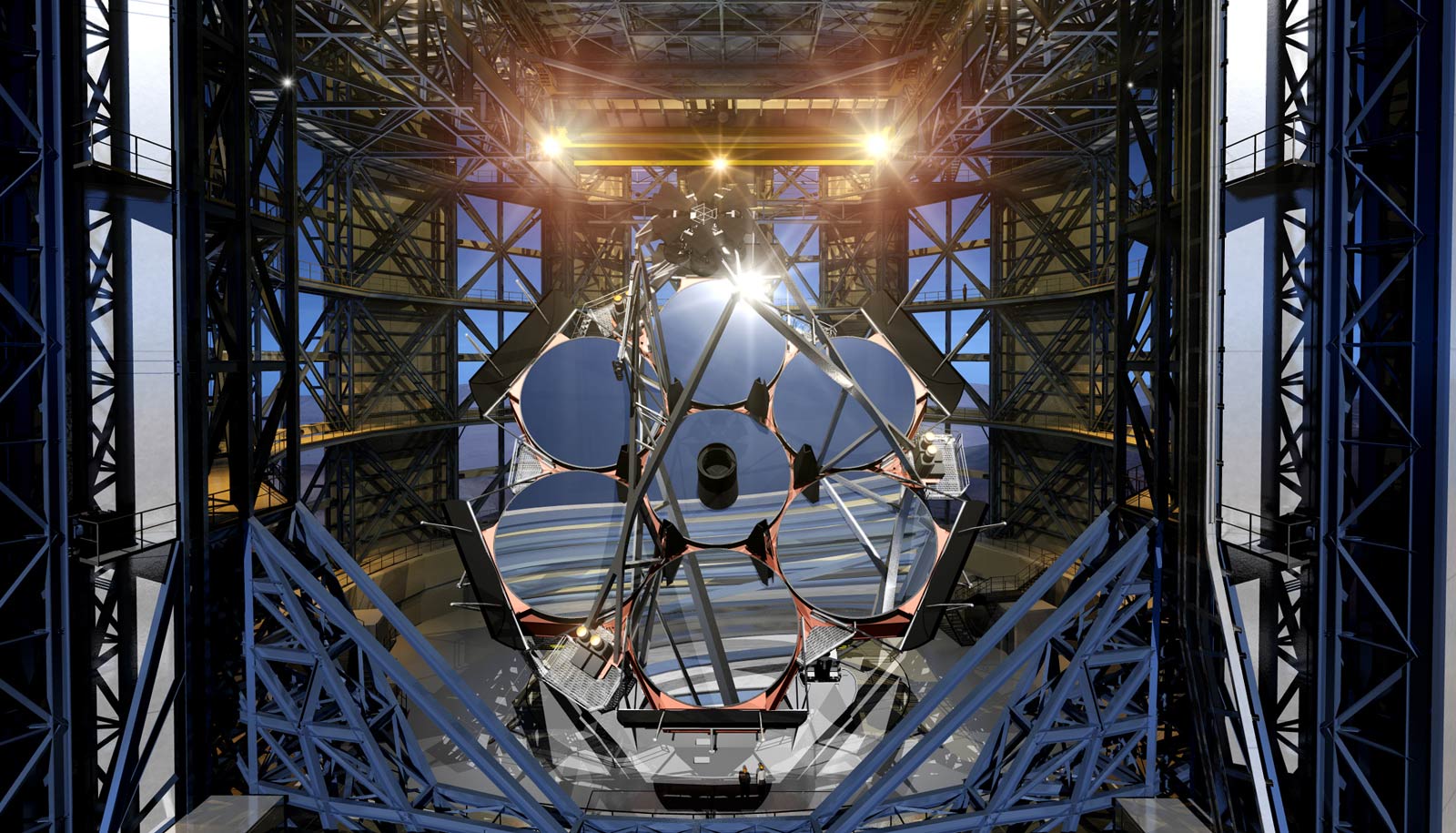 With the casting of its fifth giant mirror segment, the world’s largest telescope clears a major milestone toward completion.

Sporting a flowerlike primary mirror design of six circular segments surrounding a seventh in the center, the Giant Magellan Telescope, or GMT, will give astronomers a one-of-a-kind tool to answer some of the most fundamental questions about the cosmos and our place within, including searching for signatures of biological activity on planets outside our solar system.

The GMT is designed to make images 10 times sharper and 100 times quicker than the Hubble Space Telescope.

While its mirror segments are in production (including a spare to be rotated into the mix during maintenance), construction of the facility that will house the telescope is underway at Las Campanas Observatory in the Atacama Desert in northern Chile. The GMT is one of only two projected next-generation instruments commonly referred to as extremely large telescopes that will be able to observe the entire southern skies.

With its unique configuration of seven honeycomb mirror segments, each spanning 27.5 feet, researchers say the GMT’s light-gathering capability will be unprecedented.

“Now, with the casting of the fifth mirror, the GMT truly starts to take shape as a giant telescope,” says Laird Close, professor of astronomy at the University of Arizona’s Steward Observatory, where the giant mirrors are being manufactured. “We already have the glass for mirror number six. It’s amazing to think that we’re almost done building the telescope in terms of the glass.”

At near-infrared wavelengths, the GMT is designed to make images 10 times sharper and 100 times quicker than the Hubble Space Telescope, Close explains. This would become possible through an adaptive optics system, which counteracts the blurring of the images caused by turbulence in the atmosphere along the path of light from astronomical sources to the telescope.

Like other mirrors produced by the RFC Mirror Lab, the GMT mirrors are made so that their front surface forms a paraboloid—the shape taken on by water in a bucket when the bucket is spun around its axis; the water rises up the walls of the bucket while a depression forms in the center.

When the mirror lab started to produce the telescope’s first mirror, fabricating one with those specifications was widely deemed next to impossible. Led by the lab’s founder and director, professor Roger Angel, technicians and engineers perfected the process of producing the world’s largest, yet lightest, telescope mirrors in a process called spin casting.

Four trucks delivered the raw material for the telescope to the mirror lab underneath the university’s football stadium. Workers unloaded 68 transport crates containing 1,632 cardboard boxes, each holding 25 pounds of pristine blocks of custom-manufactured glass from the Ohara Corp. of Japan. Over the weeks that followed, each chunk was handled and inspected to make sure no foreign matter had made it into the irregularly shaped, translucent blocks.

On October 23, technicians spent the better part of a workday lying on their bellies on a platform, reaching down and carefully placing each glass chunk inside the furnace’s base, creating a sparkling pond of jagged glass in the process.

Once the glass was in place and the working platform lifted away, a crane lowered the lid and mirror lab staff prepared the furnace for the casting process. Over much of the next two months, the furnace will spin at just under five revolutions per minute, while a technological marvel forms inside.

Heating up the glass takes about a week, says Jeff Kingsley, associate director of Steward Observatory, who expected the furnace to reach its peak temperature of 1,165 degrees Celsius, or 2,129 degrees Fahrenheit, on November 4. Three days later, the temperature goes down to 700 degrees Celsius, or 1,290 degrees Fahrenheit, the rotation speed slows, and the annealing process begins, which will extend to the end of December.

“We then go to a period of very, very slow cool-down to room temperature,” Kingsley says. “At the end of January, we’ll open the lid, take the sides off the furnace, remove the band and tub walls, and reveal the casting.”

The unique fabrication process resulting in a lightweight honeycomb glass structure is the key to the success of mirrors created at the mirror lab. Not only are these mirrors so light they could float in water, but they are also very stiff and quickly adjust to changes in nighttime air temperature, each resulting in sharper images.

Set to begin science operations in 2023, the GMT will take advantage of the clear dark skies of the Atacama Desert, where almost no water vapor in the atmosphere impedes the view into the night.

At 360 square meters, or about 3,900 square feet, the telescope’s seven mirrors combine to form an area just a bit smaller than a basketball court.

The telescope will allow astronomers to answer some of the most pressing questions about the cosmos, including the detection, imaging, and characterization of planets orbiting other stars; the nature of dark matter and dark energy; the physics of black holes; and how stars and galaxies evolved during the earliest phases of the universe.

One of the most interesting things that the GMT could do, Close says, is to find life on another world, such as the recently discovered, rocky planet orbiting our closest neighboring star, Proxima Centauri.

“Imaging the planet next to its star is like looking at two dimes side by side from a hundred miles away,” Close says, “but with GMT and adaptive optics, you could easily resolve the two.”

With suitable instruments that can identify the different light signatures of chemical elements and compounds, they could then scan the planet for so-called bio signatures such as the oxygen in Earth’s atmosphere.