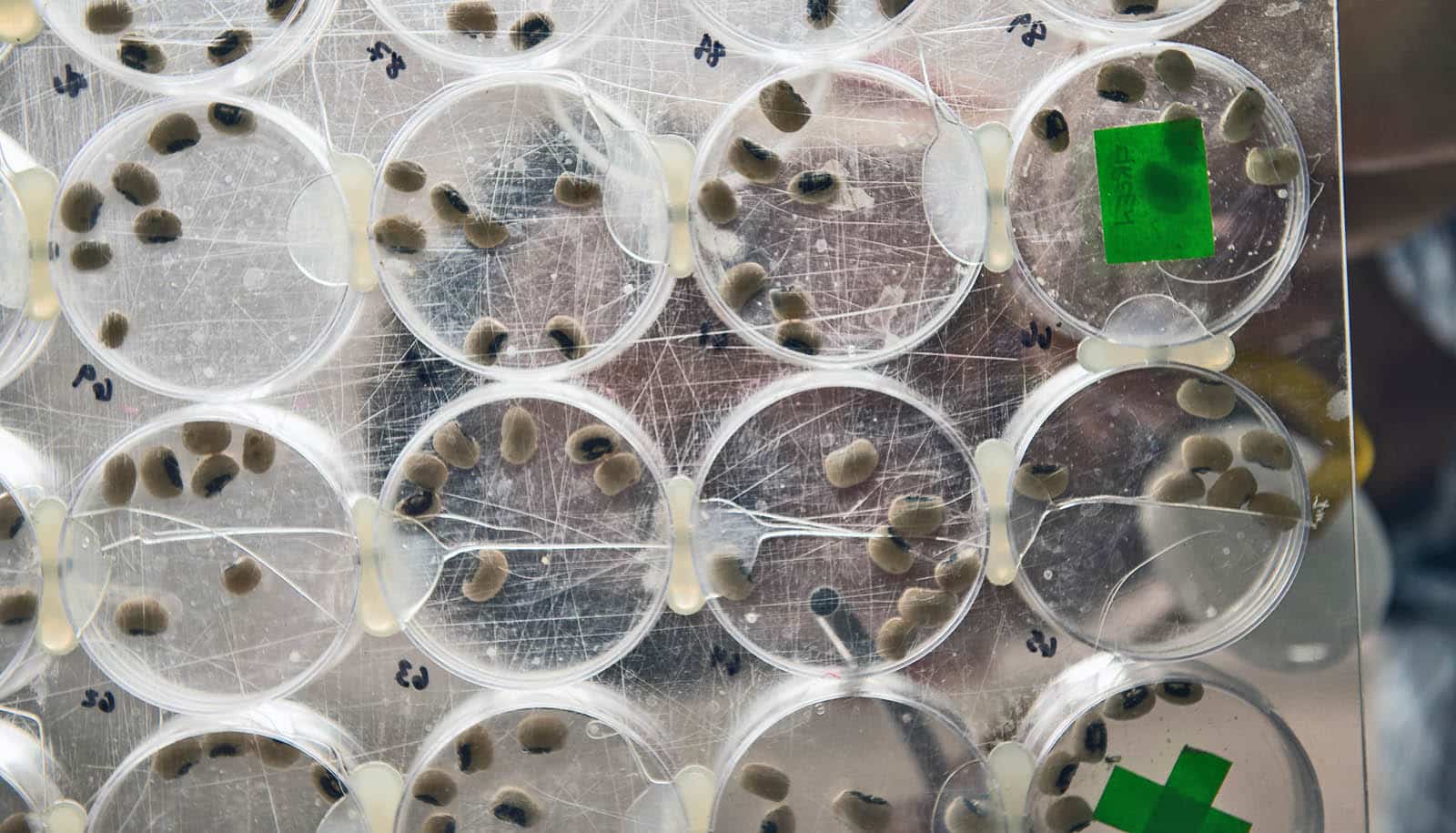 Colonies of bean beetles inhabited an array of petri dishes with tunnels between them. (Credit: Jeff Fitlow/Rice) 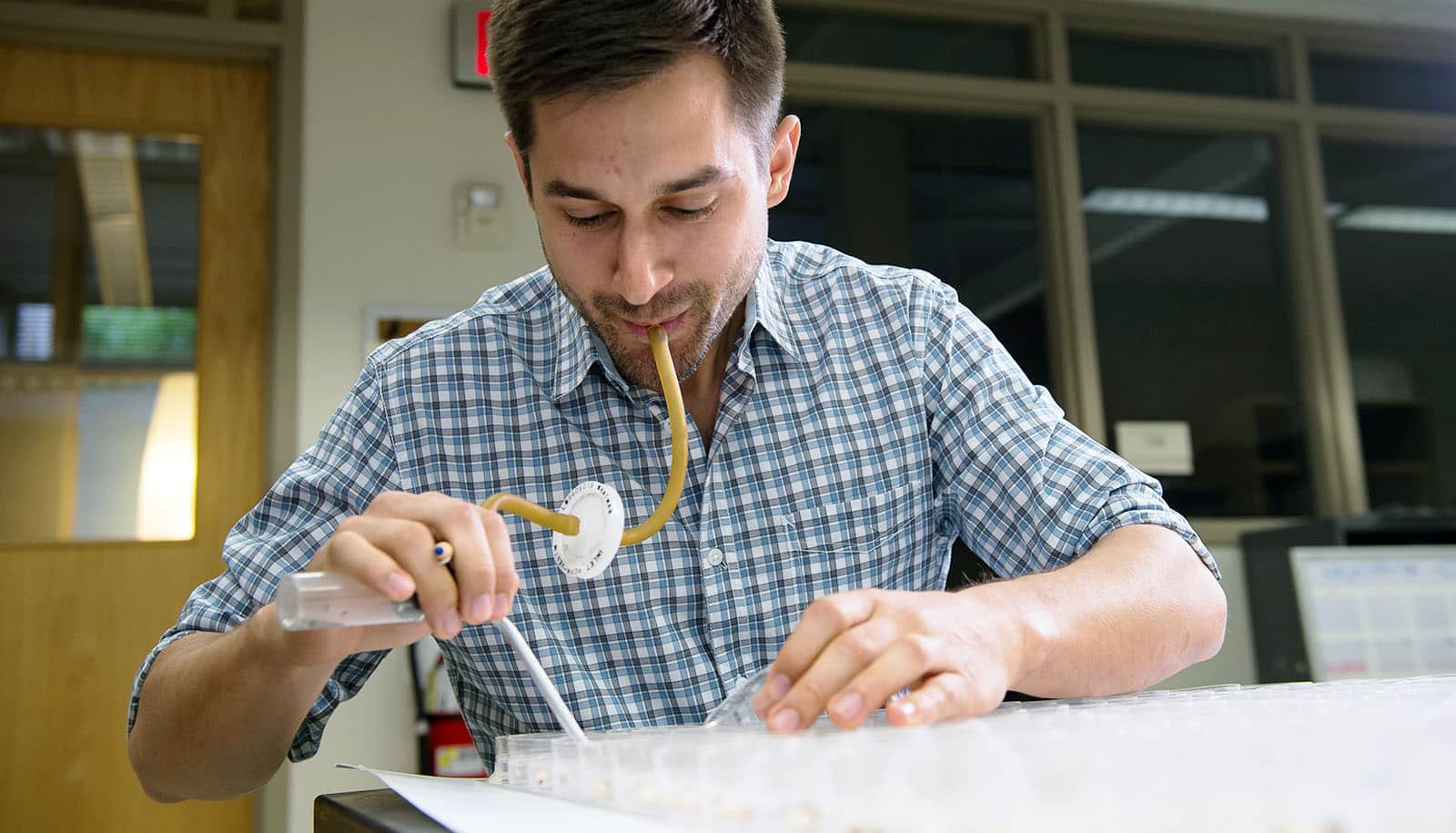 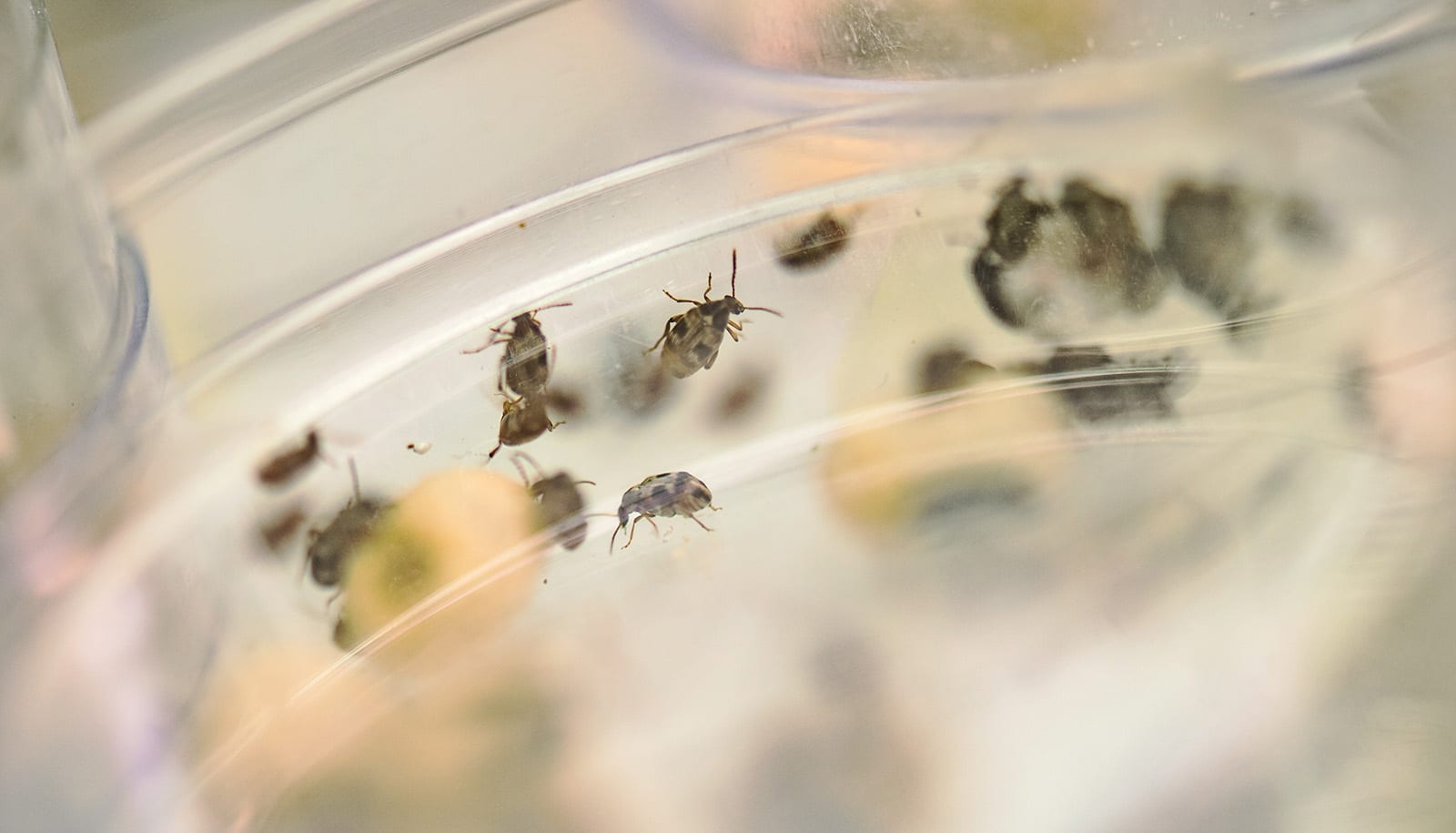 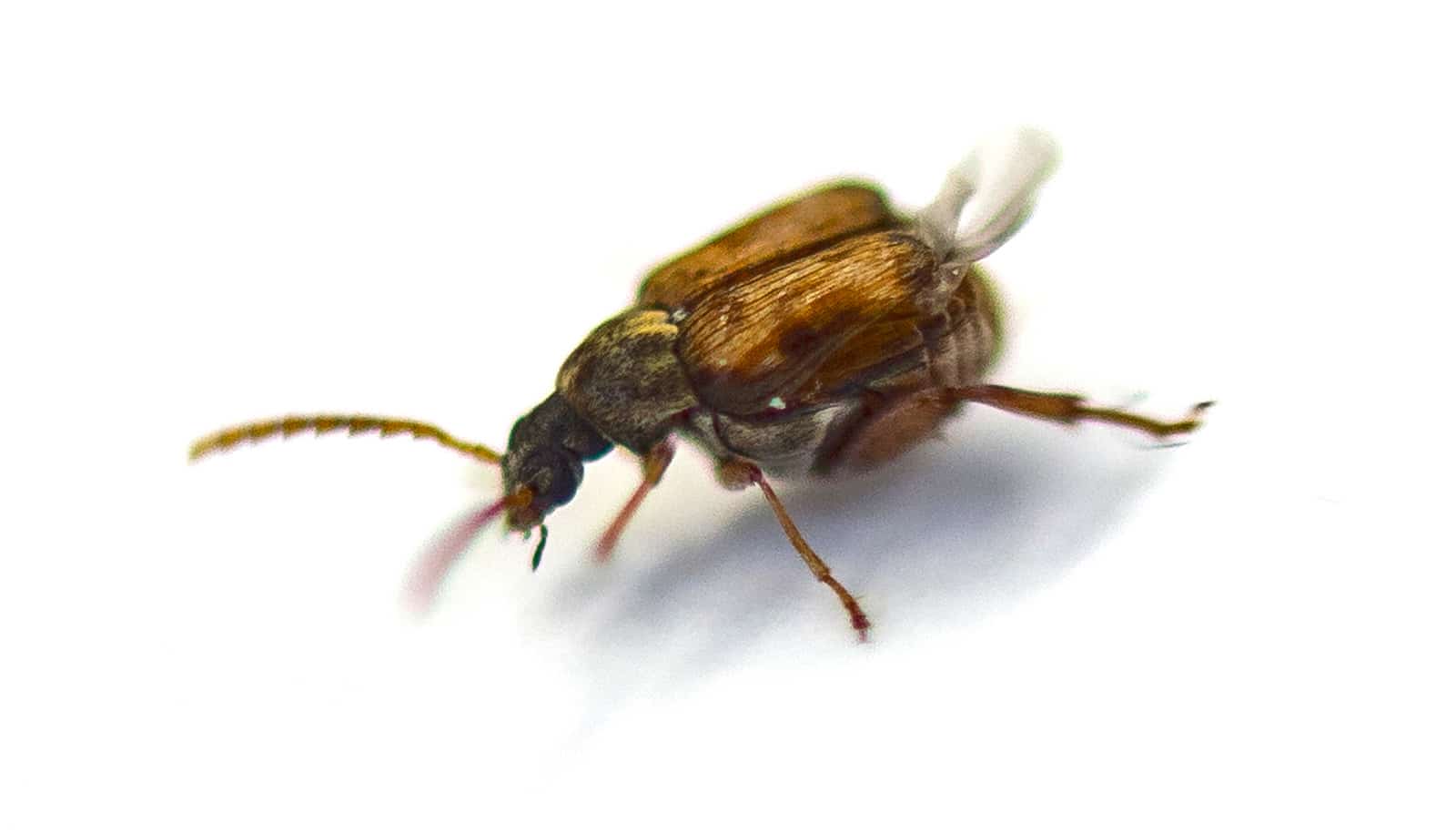 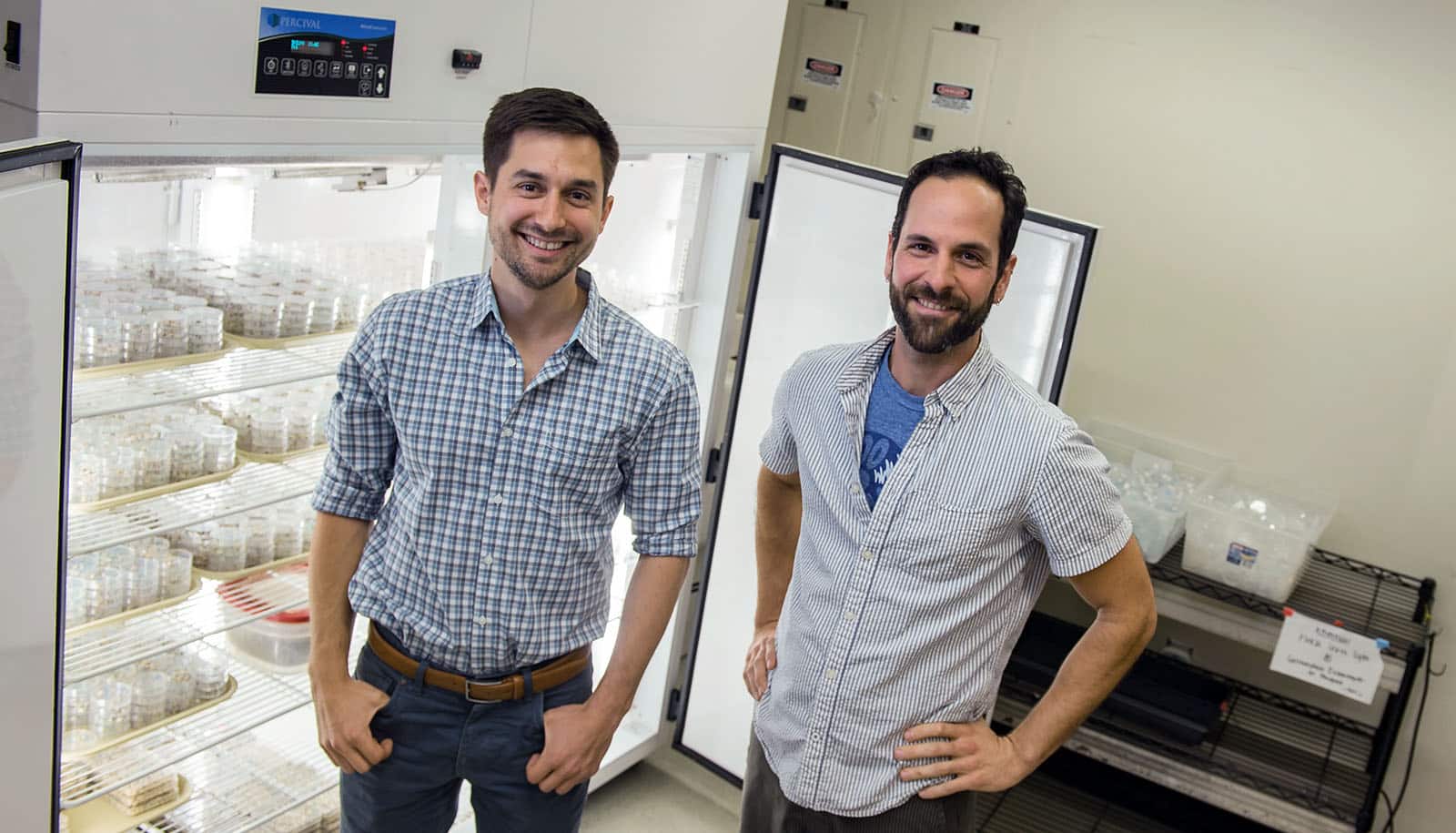 Generations of beetles born on the leading edge of an invasion are far more able to push on than those born farther back, report scientists.

Graduate student Brad Ochocki and ecologist Tom Miller of Rice University used the bean beetle as their model, which could help predict and prepare for the spread of invasive species.

“…after 10 generations we had roughly 1 beetle for every person in Cincinnati.”

The researchers chose to work with common bean beetles for their relative ease of maintenance and their rapid reproduction, Miller says, who notes that the species spawns a new generation about once a month.

The researchers bred 10 generations of the insects in their lab and found that beetles at the leading edge of an invasion, where food is more plentiful and competition less fierce, produced more offspring with the right genetic traits to carry on in the same pioneering spirit.

Ochocki called this the “Olympic Village Effect,” known by scientists as the assumption that, were Olympians to reproduce during the games, their offspring would likely carry forward evolutionary advantages for strength and agility.

That notion has real-world relevance for those who track invasive plants and animals. “We want to understand this process of spread because it’s happening more and more through biological invasions, especially with climate change,” Miller says. “Ecologists are under pressure to predict something about this process.

Tiny beetles may be coming for our guacamole

“We obviously want to understand what’s happening outside, but it’s impossibly hard because we can’t replicate the spread of cane toads across Australia, gypsy moths across the Northeast, or zebra mussels in the Great Lakes, for example,” he says. “To understand the distribution of variability, we created simple landscapes in the laboratory. We realized we could distill this very complicated process to simple ingredients.”

Ochocki, who studied biomedical engineering and mechanical engineering as an undergraduate, designed and built game board-like habitats stocked with black-eyed peas. The beetles lay eggs on the surface, and the resulting larvae burrow in and feed on the peas as they mature.

He started each colony with less than 100 insects, evenly split between males and females. Tunnels between the petri dishes allowed the most pioneering among them to spread from one to the next in search of new territory. Ochocki estimates the lab manipulated and observed about 293,000 beetles over 10 months of gathering data.

The researchers ran two sets of experiments: In one, colonies were left to their own devices to expand with the expectation that the insects on the leading edge of a colony would be more prone to advance. Control experiments eliminated this “spatial sorting” by periodically shuffling colony members between different dishes.

Could cyborg beetles soon fly to the rescue?

The results showed, first, that spatially sorted colonies—those where pioneers were not reshuffled—tended to disperse an average of 8.9 percent farther than control groups whose members were shuffled. Second, the experiments demonstrated that spatially sorted populations were more inclined to spread out, with the variance in their patterns of dispersal—where and how far they traveled—increasing 41-fold.

Those results are not good news for those who study invasive species or disease dynamics, says Miller, assistant professor of ecology and evolutionary biology.

“Farmers and other people who have an interest in maintaining a natural resource are good at detecting initial outbreaks,” he says. “When they detect a new corn pest in a field, they want to know how far might it get the next season and how far ahead of a wave they should warn growers to spray for this new bug.

“What Brad found is that even in this controlled laboratory setting, which is the simplest of all possible worlds, the process of evolution itself can generate uncertainty and variability in how populations move,” Miller says. He says that uncertainty means scientists are unlikely to ever perfect the process of predicting invasion dynamics. “That is kind of sobering.”

But including the effects of evolution can better define the range of possibilities, Ochocki says. “We suggest in the paper that accounting for evolution won’t necessarily enable you to have an accurate point prediction, but it will give you a window of possible scenarios,” he says.

Miller and Ochocki say the rapid turnover of beetle generations left little time for genetic mutation to influence spread, but they say gene surfing was a likely contributor. In gene surfing, traits present at the leading edge of an invasion can ride the wave of expansion to become abundant in newly founded populations. In this case, the random genes brought to the edge of the invasion by dispersing beetles likely generated the increase in variance that Ochocki and Miller observed. Shuffling of beetles during invasion appeared to dampen the effect.

Ochocki and Miller aren’t the only researchers using insects to investigate invasion. A group at the University of Colorado, Boulder, led by Christopher Weiss-Lehman, performed similar experiments using flour beetles that led to essentially the same results. Those results appear alongside Ochocki and Miller’s paper in Nature Communications.

“It’s a very nice demonstration that our results and theirs are not flukes,” says Miller, who learned of the work by his Colorado counterparts at a meeting several years ago. “That’s why the journal was interested in publishing them side by side; they said in their review that they rarely get an opportunity to independently validate results like this.”

The National Science Foundation supported the research. Computing resources were supplied by the NSF-supported DAVinCI supercomputer, which was procured in partnership with Rice’s Ken Kennedy Institute for Information Technology and is administered by Rice’s Center for Research Computing.