CARNEGIE MELLON (US) — The millions of  “check-ins” generated by foursquare, the location-based social network, allow researchers to create a dynamic view of a city’s workings and character.

In contrast to static neighborhood boundaries and dated census figures, these “Livehoods” reflect the ever-changing patterns of city life.

Researchers from Carnegie Mellon University’s School of Computer Science (SCS) have developed an algorithm that takes the check-ins generated when foursquare members visit participating businesses or venues, and cluster them based on a combination of the location of the venues and the groups of people who most often visit them. 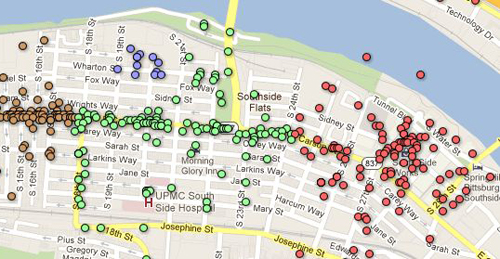 The researchers found that one Pittsburgh neighborhood, the South Side Flats, contained four distinct Livehoods, including one centered on bars popular with college students, another centered on a new shopping district dominated by chain stores, and another that focused on a supermarket. (Credit: Livehoods.org)

This information is then mapped to reveal a city’s Livehoods, a term coined by the SCS researchers. Maps for New York, San Francisco, and Pittsburgh are available on the project website. People can help choose the next city to map by voting on the Livehoods Facebook page.

“Our goal is to understand how cities work through the lens of social media,” says Justin Cranshaw, a Ph.D. student in SCS’s Institute for Software Research.

Part of the emerging field of Urban Computing, the Livehoods project takes advantage of the proliferation of smartphones and the location-based services they make possible. In this case, the researchers analyzed data from foursquare, but the same computational techniques could be applied to many location-based databases.

Livehoods thus provide a powerful new tool that could be used to address a wide variety of urban problems and opportunities. The researchers are exploring applications to city planning, transportation, and real estate development.

Livehoods also could be useful for businesses developing marketing campaigns or for public health officials tracking the spread of disease.

“In urban studies, researchers have always had to interview lots of people to get a sense of a community’s character and, even then, they must extrapolate from only a small sample of the community,” says Raz Schwartz, a Ph.D. student at Bar-Ilan University, Israel, and a visiting scholar at SCS’s Human-Computer Interaction Institute.

“Now, by using foursquare data, we’re able to tap a large database that can be continually updated.”

The Livehoods project is led by Norman Sadeh, professor and co-director of the Institute for Software Research’s Ph.D. program in Computation, Organizations and Society, and Jason Hong, associate professor in the Human-Computer Interaction Institute.

The team will present its findings June 5 at the International AAAI Conference on Weblogs and Social Media (ICWSM) in Dublin, Ireland.

All of the Livehoods analysis is based on foursquare check-ins that users have shared publicly via social networks such as Twitter. This dataset of 18 million check-ins includes user ID, time, latitude and longitude, and the name and category of the venue for each check-in.

In their study of the Pittsburgh metropolitan area, the researchers found that the Livehoods they identified sometimes spilled over existing neighborhood boundaries, or identified several communities within a neighborhood. The Pittsburgh analysis was based on 42,787 check-ins by 3,840 users at 5,349 venues.

For instance, they found that the upscale neighborhood of Shadyside actually had two demographically distinct Livehoods—an older, staid community to the west and a younger, “indie” community to the east. Moreover, the younger Livehood spilled over into East Liberty, a neighborhood that long suffered from decay but recently has seen some upscale development.

“That makes sense to me,” observed a 24-year-old resident of eastern Shadyside, one of 27 Pittsburgh residents who were interviewed by researchers to validate the findings. “I think at one point it was more walled off and this was poor (East Liberty) and this was wealthy (Shadyside) and now there are nice places in East Liberty and there’s some more diversity in this area (eastern Shadyside).”

The researchers found that one Pittsburgh neighborhood, the South Side Flats, contained four distinct Livehoods, including one centered on bars popular with college students, another centered on a new shopping district dominated by chain stores, and another that focused on a supermarket. Again, these Livehoods made sense to residents familiar with the area.

The study has limitations. Foursquare users tend to be young, urban professionals with smartphones. Consequently, areas of cities with older, poorer populations are nearly blank in the Livehoods maps.  “You can literally see the digital divide,” Schwartz says.

Likewise, foursquare members don’t check-in at all of their destinations—hospitals, for instance. But the researchers contend that the limitations are those of the data, not the methodology.

The National Science Foundation, the Army Research Office, and the Sloan Foundation provided funding for the research.