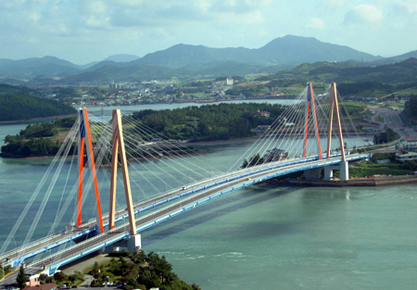 South Korea’s Jindo Bridge connects the mainland to Jindo Island. A network of wireless sensors, affixed to the bridge in boxes attached with strong magnets, continuously monitors the bridge’s structural health. It’s the first monitoring systems of its kind on a cable-stayed bridge and the largest of its kind for civil infrastructure to date.

U. ILLINOIS (US)—An inexpensive wireless system designed to continuously—and reliably—monitor structural health has been successfully deployed at full scale on the Jindo Bridge in South Korea.

The joint project between the University of Illinois at Urbana-Champaign, KAIST in Korea, and the University of Tokyo is the first dense deployment of a wireless sensor network on a cable-stayed bridge and the largest of its kind for civil infrastructure to date.

The researchers say the sensors can be manufactured cheaply but still produce the high-fidelity data required for structural health monitoring.

Their research has also produced a customizable software framework that simplifies the development of structural health monitoring applications for smart sensor platforms.

In combination, their sensors and software create an integrated framework that can be utilized by most civil engineers without the need for extensive background in electrical engineering or computer science.

According to Spencer, more than 40 institutions throughout the world are now using the Illinois Structural Health Monitoring Project framework.

The goal is to achieve a more reliable alternative to traditional structure inspection techniques. Until now, though, its usefulness was limited by concerns about cost and effectiveness.

“Manual inspection of bridges costs millions of dollars, is relatively unreliable, and can only be carried out infrequently,” Spencer adds.

“Some real-world structural health monitoring deployments using wired sensors have been able to provide detailed information about the state of civil infrastructure. However, the enormous expense of installing traditional monitoring systems has significantly limited such deployments.”

The team’s technology employs concurrent and distributed real-time processing to overcome the limitations inherent in traditional centralized approaches, which Agha says is not feasible with moderate to large numbers of sensors. “Tremendous amounts of data must be sent to such a central station, requiring expensive, difficult-to-install wired networking and introducing a single point of failure,” Agha explains.

What’s behind the global K-pop and Korean film takeover?

Attackers could intercept terahertz wireless networks after all

Terahertz signals don’t lose much data while bouncing off walls