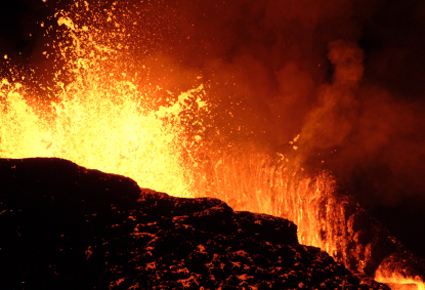 TEXAS A&M (US)—While the eruption from the Eyjafjallajokull volcano in Iceland ground much of international travel to a halt, if a nearby volcano named Mount Katla should erupt, it has the potential to be many times more devastating.

That’s the assessment of Jay Miller, a Texas A&M University volcanologist who has done research in the area for decades. Miller says that an eruption from Katla could dwarf anything seen so far from Eyjafjallajokull (pronounced Eye-jaff-jalla-jok-kul). 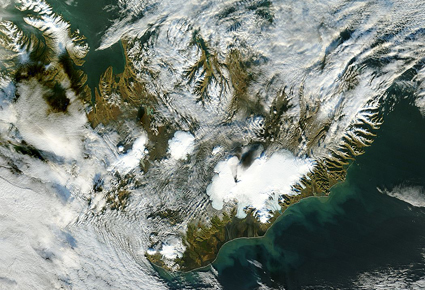 This satellite image taken in 2004 shows as from Grimsvotn Volcano, Iceland, across the Vatnajokull Ice Cap. An eruption from this volcano in 1783 released enough ash to have a cooling effect in Europe and Asia, according to Miller. (Credit: NASA/MODIS Rapid Response System)

“It’s a much larger volcano, and in the past, we know its eruptions have been much larger, too,” Miller explains.

“We know that in 934 A.D. it had one of the largest fissure eruptions of any on Iceland. We don’t have too many written records from that time, but by studying ice cores from Greenland and other weather records, we can tell that the 934 eruption was extremely powerful and had a significant impact on climate.

“So as bad as Eyafjallajokull is, Katla could be much, much worse.”

Miller says Katla has been more active than others in the region. Eyjafjallajokull has erupted only three times in the past 1,000 years, while Katla has erupted at least 20 times since then.

That’s why the current eruption could be a bad omen: Every time Eyjafjallajokull has erupted—as it has for the past week—Katla follows behind, always erupting within the same year, sometimes just a few months after its little sister.

“We don’t know when because volcanoes in that part of the world are very difficult to predict,” he notes, adding that Katla is located about 10 to 12 miles from Eyjafjallajokull but is not part of the same volcano system.

“We do know that Katla has been a much more active volcano. Its last significant eruption came in 1918,” he notes. “An eruption from nearby Grimsvotn volcano in 1783 occurred and so much volcanic haze and ash covered Europe and Asia that it had a dramatic cooling effect. Ben Franklin, who was ambassador to France at the time, called it ‘the year without a summer’ and he later wrote a paper about volcanoes affecting climate called “Meteorological Imaginations and Conjectures” and presented it at a conference the following year.

Why Iceland’s volcanic activity is so special