RICE (US) — Scientists have made a major step toward synthesizing collagen, the most abundant protein in the human body.

A team at Rice University is digging into collagen’s molecular structure to see how it forms and interacts with biological systems.

“[Collagen] basically is the connective fiber that holds cells together; without it you’d turn into a big puddle,” says Jeffrey Hartgerink, an associate professor of chemistry and of bioengineering, who in a previous work unveiled a new way to synthesize self-assembling collagen.

“By mass, collagen is the most common protein there is. But it’s different from almost any other you might look at,” he adds.

Hartgerink likens collagen to DNA with a structural twist, as it has not two but three intertwining peptide strands.

“Watson and Crick, when they were first trying to understand DNA, figured out the underlying code for how all the base pairs fit together,” he explains. “Collagen is similar, except there are three strands. In this paper, we’ve started to crack the code of which amino acids go with what others to stabilize the structure.”

While scientists have made a great deal of progress defining the structures of other proteins, “only a small group of us have been interested in collagen. And because of that, our understanding of it has lagged behind,” he notes.

Hartgerink and his former graduate student, Jorge Fallas, now a postdoctoral researcher at the University of Washington, wrote a computer program that predicts the most stable structures of nanometer-sized collagen.

In nature, these small structures link into chains that serve as connective tissue in the body. Hartgerink and Fallas followed up the computer research by making and testing the collagen detailed in their calculations.

Their success, reported in the online journal Nature Communications, will be of interest to physicians and scientists who work in reconstructive surgery, cosmetics, and tissue engineering as well as to researchers investigating collagen protein interactions that could lead to new treatments for cancer and other diseases.

Hartgerink and Fallas analyzed charged interactions between amino acids that attract one strand to another (and in this case, yet another) to form the triple helix.

In the same way three-color images must be properly aligned for a viewer to see a complete picture, the three strands of a collagen protein must be in register for the protein to carry out its function.

“Collagen does more than hold cells together,” he says. “It also binds other proteins that have interesting functions. Those proteins will attach to collagen, and then cells come along and bind to those proteins. Based on that interaction, a cell will then ‘decide’ how to behave or differentiate into a different type of cell.”

Hartgerink says that property makes collagen especially valuable for biological scaffolds, materials that are under intense study as a way to grow new body parts—even entire organs—to replace damaged ones. 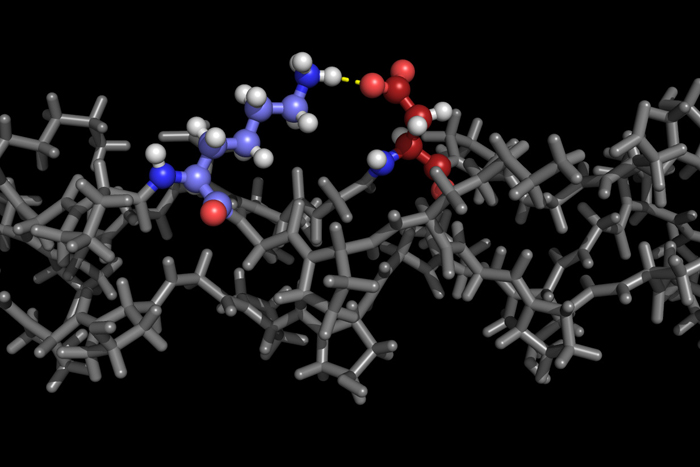 A program developed at Rice University details stable forms of collagen proteins for synthesis in the lab. The ability to synthesize custom collagen could lead to better drug design and treatment of disease. The colored portion of the molecule in this illustration shows positively charged lysine and negatively charged aspartate interacting in the required axial geometry that stabilizes the triple helix. View larger. (Credit: Hartgerink Lab/Rice University)

The computer program designed by Fallas and Hartgerink calculates the stability of each possible alignment of a given set of peptide strands—27 in all—to find the best matches of positively and negatively charged amino acids. It then assigns each set a score, based on the net positive or negative charge of the entire helix.

“We create huge, theoretical populations of collagen sequences and score all of them,” he explains. “We find out which are closest to this magical score of 0 and throw out all the other ones.”

That tells the researchers which sequences are likely to self-assemble into the most stable helixes.

“The math looks complicated, but a personal computer can generate one of these sequences in one or two minutes of processing time. It’s not super sophisticated.” He says the code will be available on his group’s home page for other researchers to try.

Hartgerink’s lab, based at Rice’s BioScience Research Collaborative, has the unusual capacity to carry out both theoretical and experimental sides of the work. While the program generates test sequences in minutes on a desktop computer, synthesis and analysis of actual collagen takes much more effort.

“Once you have a sequence, you want to test it to see if it actually works,” he says. “The math is useless if it’s not predicting reality. Our proof-of-principle showed the computer code can be used to design a triple helix that folds properly. Now that we know how to do this, we can think about making collagen biomaterials for things like scaffolding, or to test protein/collagen receptor interactions, which people have been trying to demonstrate for a long time.”

He says the new work could help researchers decipher collagen’s role in the metastasis of cancer.

“Cancer cells need to be able to degrade collagen in order to move from organ to organ. We need to understand the structure of collagen to learn how they do that,” Hargerink notes. “Blood clots happen because specific proteins recognize a collagen sequence. If we don’t understand the structure, we can’t assist clotting to heal a wound or help people who have overclotting problems.

“All these targets are critical but they’re very difficult to approach when we don’t fundamentally understand collagen structure,” he says. “We’re not solving all those problems here, but this is a good first step.”

The National Science Foundation, the Robert A. Welch Foundation, and the Norman Hackerman Advanced Research Program of Texas supported the work.