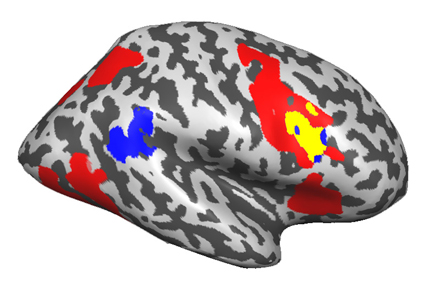 Brain regions that are active when an individual was searching for a target letter are shown in red; those that reacted to a surprise stimulus are shown in blue. The inferior frontal junction, shown in yellow, was involved in both processes and is believed to play a primary role in coordinating the two different types of attention. (Credit: Christopher Asplund)

VANDERBILT (US)—Right now you’re reading this story, but if a fire alarm sounded, your attention would be involuntarily snatched away. For the first time researchers have shown how our brains coordinate these two types of attention, and why we may be temporarily blinded by surprises.

The findings was published in Nature Neuroscience.

“The simple example of having your reading interrupted by a fire alarm illustrates a fundamental aspect of attention: what ultimately reaches our awareness and guides our behavior depends on the interaction between goal-directed and stimulus-driven attention. For coherent behavior to emerge, you need these two forms of attention to be coordinated,” says study coauthor René Marois, associate professor of psychology at Vanderbilt University.

“We found a brain area, the inferior frontal junction, that may play a primary role in coordinating these two forms of attention,” he adds.

The researchers were also interested in what happens to us when our attention is captured by an unexpected event.

“We wanted to understand what caused limitations in our conscious perception when we are surprised,” says the study’s primary author Christopher Asplund, a graduate student in psychology. “We found that when shown a surprise stimulus, we are temporarily blinded to subsequent events.”

In their study, the research team asked individuals to detect the letter “X” in a stream of letters appearing on a screen while their brain activity was being monitored using functional magnetic resonance imaging, or fMRI. Occasionally, an image of a face would unexpectedly interrupt the stream.

The surprise caused the subject to completely miss the “X” the first couple of times, despite the fact they were staring directly at the part of the screen on which it appeared. They were eventually able to identify it as successfully as when there was no surprise.

Using fMRI, the researchers found that the inferior frontal junction, a region of the lateral prefrontal cortex, was involved in both the original task and in the reaction to the surprise.

“What we think might be happening is that this brain area is coordinating different attention systems—it has a response both when you are controlling your attention and when you feel as though your attention is jerked away,” Asplund says.

Surprise stimuli trigger what is known as the orienting response in which the heart rate increases, the nervous system is more aroused, and we pay intense attention to a new item in our environment. Described by Pavlov in dogs, the orienting response allows one to determine if a new item is a good thing, such as food, or a threat, such as a predator, and to react accordingly.

“What we show is the dark side or negative impact of the orienting response. We found it blinds you to other events that can occur soon after the presentation of the surprise stimulus,” Marois says.

The researchers hypothesize that we may be temporarily blinded by surprise because the surprise stimulus and subsequent response occupies so much of our processing ability.

“The idea is that we can’t attend to everything at once,” Asplund says.  “It seems that the inferior frontal junction is involved in this limitation in attention.”

The new research supports previous work by Marois’ laboratory that found the interior frontal junction plays the role of an attentional bottleneck—limiting our ability to multitask and attend to many things at once.

“These new findings and our previous findings suggest that this area is centrally involved in the control of attention and may limit our attentional capacities,” Marois says. “It is a very exciting convergence of findings across our studies. We’re conducting studies now to demonstrate whether in fact disruption of activity in this brain region leads to loss of control of attention.”

The National Science Foundation and National Institutes of Mental Health funded the research. Jay Todd, a post-doctoral researcher at the University of Chicago, and Andrew Snyder, a previous research assistant in the laboratory, were also coauthors of the study.

Healthiest noise level for the office is about 50 decibels

Can a social media redesign keep users from zoning out?