RICE (US)—Researchers have solved a long-standing mystery about why some fluids containing polymers—including saliva—form beads when they are stretched and others do not.

The findings, which researchers say could lead to advancements in personalized medicine, ink-jet printing, and nanomaterial fiber spinning, are published in the journal Nature Physics.

“Any kindergartner is familiar with this beading phenomenon, which you can demonstrate by stretching a glob of saliva between your thumb and forefinger,” says study coauthor Osman Basaran, a chemical engineering professor at Purdue University. “The question is, ‘Why does this beading take place only in some fluids containing polymers but not others?'”

Matteo Pasquali, a study coauthor and professor in chemical and biomolecular engineering at Rice University, says in answering the question the research team is “addressing everyday processes that apply to fiber and droplet formation, not just in multibillion-dollar industrial plants but also in fluids produced in living cells.”

Saliva and other complex “viscoelastic” fluids like shaving cream and shampoo contain long molecules called polymers. When a strand of viscoelastic fluid is stretched, these polymers can cause a line of beads to form just before the strand breaks.

Pasquali says the explanation for why some viscoelastic fluids form beads and others do not was decades in the making.

The origins of the work can be traced to Pasquali’s and Basaran’s doctoral research adviser, L.E. “Skip” Scriven of the University of Minnesota. Pasquali says Scriven worked out the basics of the competition between capillary, inertial, and viscous forces in flows during the 1970s and 1980s.

In the mid-1990s, during his doctoral research at Minnesota, Pasquali expanded on Scriven’s earlier work to include the effects of viscoelasticity, which originates in liquid microstructures and nanostructures.

Finally, Pasquali’s former doctoral student, Pradeep Bhat, the lead author of the new study, took up the mantle nine years ago as a Ph.D. student in Pasquali’s lab and continued working on the problem for the past three years as a postdoctoral researcher in Basaran’s lab at Purdue. 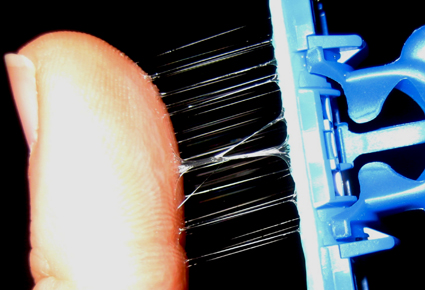 Bhat, Basaran, and Pasquali found that a key factor in the beading mechanism is fluid inertia, or the tendency of a fluid to keep moving unless acted upon by an external force.

Other major elements are a fluid’s viscosity; the time it takes a stretched polymer molecule to “relax,” or snap back to its original shape when stretching is stopped; and the “capillary time,” or how long it would take for the surface of the fluid strand to vibrate if plucked.

“It turns out that the inertia has to be large enough and the relaxation time has to be small enough to form beads,” Bhat says.

The researchers discovered that bead formation depends on two ratios: the viscous force compared with inertial force and the relaxation time compared with the capillary time.

Other coauthors include Gareth McKinley, professor of mechanical engineering at the Massachusetts Institute of Technology and additional researchers from Purdue.

Mats made from wine antioxidant could keep food fresh

Electronic fabric lets you play Tetris with your arm