U. CHICAGO (US) — In order to understand the behavior of US presidents, it is necessary to recognize that a president’s core interest is in acquiring power—and holding on to it—a new book argues.

“This single, simple insight about the president and power goes a long way to explaining presidential behavior,” says William G. Howell, professor in American politics at the University of Chicago. Once this fundamental truth is more widely accepted, he says, discourse on the presidency will become more coherent and fruitful.

The presidential preoccupation with power is not a single-minded pursuit, but its attainment and maintenance affects all presidential efforts, whether they involve bargaining with others or new sources of influence, Howell argues in the book, Thinking about the Presidency: The Primacy of Power. 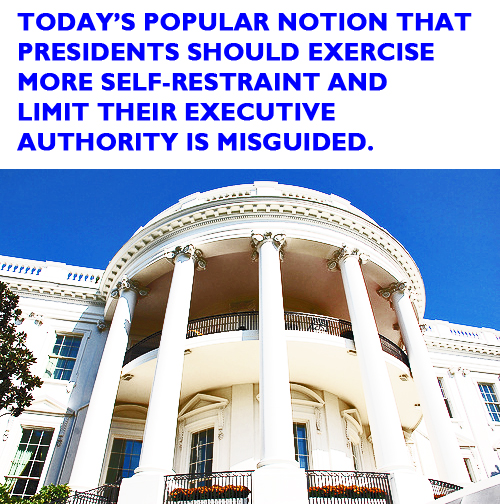 In the book, Howell explains that when the Founding Fathers wrote the US Constitution they gave the president only a handful of enumerated powers, but the ambiguity of the document has allowed consecutive presidents to add to their powers over time. (Credit: Adam Fagen/Flickr)

In fact, concerns about power are logical and necessary to enact public policy, undo the work of predecessors, respond to perceived public mandates, and secure a strong place in history.

“The president sits alone atop his governing institution and has eyes on a broader and longer horizon than legislators or judges or bureaucrats,” he says.

“He represents the country as a whole. This is part and parcel of a president’s need to obtain power and to exert control. He needs to dominate his branch of government and the whole institution.”

Of course, wanting power and holding power are two different things. In the book, Howell explains that when the Founding Fathers wrote the US Constitution they gave the president only a handful of enumerated powers, but the ambiguity of the document has allowed consecutive presidents to add to their powers over time.

At the same time, the Constitution posits that the general welfare will be protected and promoted not by any single branch of government, but through the interplay of all the three branches.

Today’s popular notion that presidents should exercise more self-restraint and limit their executive authority is misguided, he says.

“It ignores the foundational incentives that executives face, incentives where they are asked to address every conceivable problem in the world and yet they lack the formal authority within the constitution to fulfill those expectations. They have to manufacture power or they have to beseech the other branches of government to give them powers that are not automatically found in the Constitution if they stand any chance at survival.”

Refusing to act a failure

Interestingly, even as presidents accumulate more power for themselves, at no time are they seen more as failures than when they do not exercise that power, especially when it appears that they are refusing to act.

One example of this is President Jimmy Carter and the Iran hostage crisis. In 1979, a group of young Islamic militants stormed the embassy in Tehran and held 66 Americans prisoner for 444 days.

Carter’s failure to end the crisis earlier derived not from unwillingness to act but from a lack of viable options. But the fact that more wasn’t done ultimately led to Carter’s downfall.

Still, beyond the Constitutional limits on presidential power are other restrictions, such as cultural misgivings. Built into the American psyche, largely as a result of the dislike of the absolute power held by the British monarchy they left behind, is a condemnation of presidential candidates who betray too much interest in holding the office.

In the 2000 election George W. Bush regularly needled Vice President Al Gore for his long-standing ambition to become president. Further, Washington Post correspondent David Broder derided Gore’s acceptance speech at the Democratic convention because he talked about “what he wants to do as president.”

Consequently, Bush was elected, despite the fact that he also came from a long-standing political family. It was the perception of Gore’s thirst for power that defeated him, Howell points out, regardless of the fact that Bush was equally ambitious.

COVID-19 could force a rethink of America’s safety net

The Great Depression proved we need government in a crisis