DUKE (US) — Scientists have discovered that your feelings about something and the value you put on it are calculated similarly in a specific brain region.

The region is a small area right between the eyes at the front of the brain. It’s called the ventromedial prefrontal cortex, or vmPFC for short.

Scott Huettel, director of Duke University’s Center for Interdisciplinary Decision Science, says scientists studying emotion and how the brain values things, or neuroeconomics, had independently singled out this area of the brain in their research but neither group recognized that the other’s research was focused on it too. 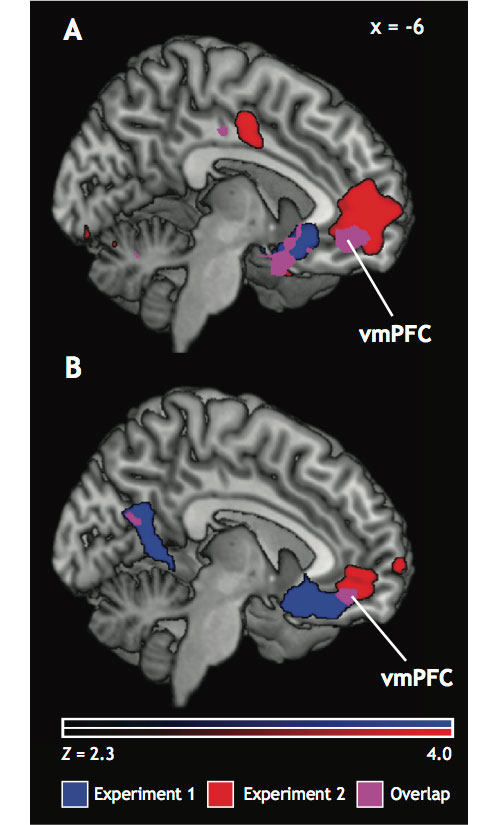 MRI data show which areas of the brain are active as a study subject either experiences an emotion or strives to modify it. The ventromedial prefrontal cortex (labeled vmPFC) becomes more active as a person experiences more positive feelings. (Credit: Amy Winecoff)

Earlier research by other groups had shown the vmPFC participates in calculating the value of rewards and that it is engaged by positive stimuli that aren’t really rewards, like a happy memory or a picture of a happy face. A separate line of studies had shown that this brain region also set values on little things like snacks.

The vmPFC handles value tradeoffs such as “is that product worth parting with my hard-earned money?”

“This says that your emotions would enter into that tradeoff,” Huettel says.

“The neuroscience fits with your intuitive understanding,” says Amy Winecoff, a graduate student in psychology and neuroscience, who led the research. “Emotions appear to be relying on the same value system.”

In the new study, experimental subjects were first trained to do “reappraisal,” in which they could change their emotional response to a situation. “In reappraisal you reassess the meaning of an emotional stimulus, rather than trying to avoid the emotional stimulus or suppress your reaction to it,” Winecoff says.

While the subjects’ brains were being scanned using functional MRI, they were shown images of evocative scenes and faces. After each image the subjects were told to either let their feelings flow or to practice reappraisal to change their thoughts. Then they were asked to rate how positive or negative they felt.

In the case of “an unregulated positive affect”—letting the good feelings flow—the vmPFC was shown to be working harder, which the researchers say could be used to predict how much value a person is putting on something. But when the subjects dampened their emotion responses to positive images, the vmPFC activation diminished, as if the images were less valuable to the subjects.

“This changes our frame of reference for thinking about these things,” Huettel says. He says advertisers have long been using emotional appeals to get people to value their products, “but they didn’t know why it worked.”

Previous studies had focused only on reappraisal of negative emotions, but this time around the scientists wanted to watch people reappraise both negative and positive responses. “We have kind of a skewed picture because this has only been done on the negative,” Winecoff says.

“It’s not the case that you never want to reappraise a positive emotion,” says Huettel. But when buying a house or a car, it’s a good idea to dampen your infatuation down a bit, he adds.

Sugary brain implant is the softest ever made