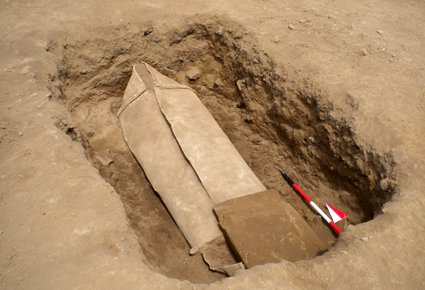 The lead coffin archaeologists found in the abandoned ancient city of Gabii, Italy, could contain a gladiator or bishop. Below, Gabii project field director Anna Gallone brushes dirt away from the lead-encased burial. The sarcophagus will soon be transported to the American Academy in Rome, where engineers will use heating techniques and tiny cameras to learn more about the contents without breaking it open. (Courtesy: Jeffrey Becker/McMaster University)

U. MICHIGAN (US)—In the ruins of a city that was once Rome’s neighbor, archaeologists last summer found a 1,000-pound lead coffin. Who or what is inside is still a mystery, says Nicola Terrenato, who leads the project—the largest American dig in Italy in the past 50 years.

The sarcophagus will soon be transported to the American Academy in Rome, where engineers will use heating techniques and tiny cameras in an effort to gain insights about the contents without breaking the coffin itself. 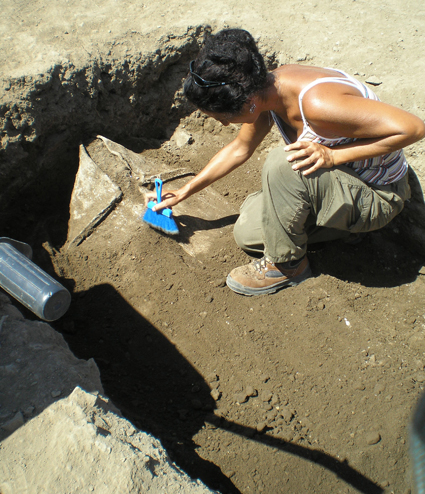 “We’re very excited about this find,” says Terrenato, University of Michigan professor of classical studies. “Romans as a rule were not buried in coffins to begin with and when they did use coffins, they were mostly wooden. There are only a handful of other examples from Italy of lead coffins from this age—the second, third, or fourth century A.D. We know of virtually no others in this region.”

This one is especially unusual because of its size.

“It’s a sheet of lead folded onto itself an inch thick,” he explains. “A thousand pounds of metal is an enormous amount of wealth in this era. To waste so much of it in a burial is pretty unusual.”

Was the deceased a soldier? A gladiator? A bishop? All are possibilities, some more remote than others, Terrenato says. Researchers will do their best to examine the bones and any “grave goods” or Christian symbols inside the container in an effort to make a determination.

“It’s hard to predict what’s inside, because it’s the only example of its kind in the area,” Terrenato adds. “I’m trying to keep my hopes within reason.”

Human remains encased in lead coffins tend to be well preserved, if difficult to get to. Researchers want to avoid breaking into the coffin. The amount of force necessary to break through the lead would likely damage the contents. Instead, they will first use thermography and endoscopy. Thermography involves heating the coffin by a few degrees and monitoring the thermal response. Bones and any artifacts buried with them would have different thermal responses, Terrenato explains. Endoscopy involves inserting a small camera into the coffin.

But how well that works depends on how much dirt has found its way into the container over the centuries.

If these approaches fail, the researchers could turn to an MRI scan—an expensive option that would involve hauling the half-ton casket to a hospital.

The dig that unearthed this find started in summer 2009 and continues through 2013. Each year, around 75 researchers from around the nation and world spend two months on the project at the ancient city of Gabii (pronounced “gabby”).

The site, situated on undeveloped land 11 miles east of Rome in modern-day Lazio, was a major city that pre-dates Rome but seems to have waned as the Roman Empire grew.

Studying Gabii gives researchers a glimpse into pre-Roman life and offers clues to how early Italian cities formed. It also allows them broader access to more substantial archaeological layers or strata. In Rome, layers of civilization were built on top of each other, and archaeologists are not able or allowed to disturb them.

“In Rome, so often, there’s something in the way, so we have to get lucky,” Terrenato says. “In Gabii, they should all be lucky spots because there’s nothing in the way.”

This research is funded in part by the National Geographic Society. The managing director of the project is Jeffrey Becker, assistant professor of classics at McMaster University. The Italian State Archaeological Service (Soprintendenza di Roma) is authorizing and facilitating the project.

23,000-year-old human footprints are oldest in the Americas