A prototype for a new hydrofoil catches the energy of tidal flows in much the same way that an airplane wing catches air. (Credit: Brown University) 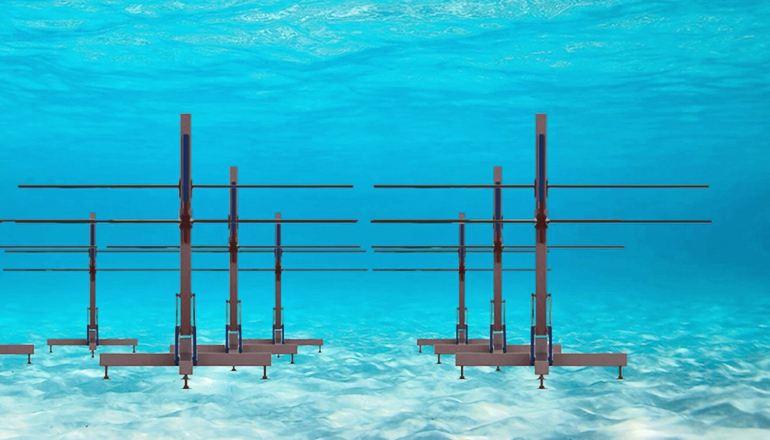 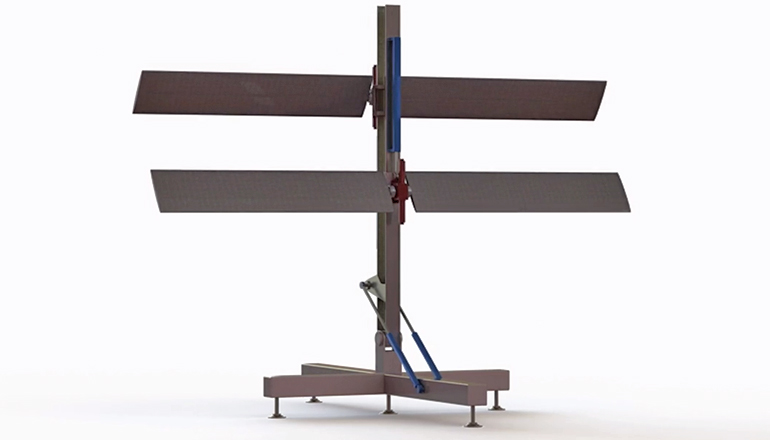 The constant motion of the tides makes them a dependable source of energy, but designing a device to gather tidal energy in shallow water, where the ebb and flow move fastest and the energy potential is highest, has been problematic.

The group has been testing its small prototype in the lab to prove the concept and presented their preliminary results at the ARPA-E Energy Innovation Summit in Washington, DC, and at the Bicameral Task Force on Climate Change.

“We were very encouraged by the response we received,” says Shreyas Mandre, assistant professor of engineering at Brown University. “We’re looking forward to getting to work on the next phase of the project.”

The group’s work grew partly out of a recent study commissioned by the Department of Energy (DOE) to identify the best locations for harvesting tidal energy that found that many ideal locations are in shallow bays and inlets, often 10 meters in depth or less.

“When (tidewater) is forced through a narrow, shallow channel it speeds up, and therefore focuses the energy,” Mandre says. “It’s this focusing we want to take advantage of.”

But harvesting energy from the shallows comes with a myriad of problems—especially for traditional, windmill-style turbines. The circular motion of a turbine means it must be as tall as it is wide, a geometry ill-suited for a channel that is wide but shallow like many of those identified in the DOE report.

And that’s not the only problem. Bays and inlets are often shipping channels and recreation areas, so tall turbines could get in the way of commercial and recreational boats. There are also concerns about fish and other wildlife swimming among spinning blades.

A hydrofoil device offers a different approach. It catches the energy of tidal flows in much the same way that an airplane wing catches air.

The beauty of the design is that it is a good geometric fit in wide and shallow channels. A single wing can span an area that would require a series of several turbines placed side-by-side—an expensive and inefficient arrangement. Gaps between the turbines would allow water to slip through untouched, which is a waste of potential power. A wide wing, on the other hand, could generate power from the entire span.

Concerns about shipping traffic and wildlife are lessened by the wing design as well. The apparatus can lie flat on the sea floor when big ships come through. The oscillating motion is biomimetic,  not unlike a flapping fin, and less violent than a turbine spinning like a lawnmower blade.

The hydrofoil concept itself isn’t entirely new, Mandre says. But his team’s design adds a “secret sauce,”—a computer algorithm that monitors and controls the fine motion of the wing for maximum efficiency.

The researchers have been testing their design using a small prototype about 16 inches wide. In a water flow created in the lab, they have shown that their device gathers power as much as two to four times more efficiently than existing hydrokinetic systems. And those data come from the relatively slow flow speeds achievable in the lab. The team expects their efficiency to increase in faster flows outside the lab.

They say that’s the next step: taking it outside the lab.

“We’re confident about how our lab results will scale with size,” Mandre says. “The next step is to demonstrate that with a larger device in a tidal test site.”

The group has arranged a partnership with a testing facility near Little Bay in New Hampshire. They’re now seeking federal funding and industry partnerships to build their new prototype and push the project forward.

Ultimately, the group hopes the device can play a role in harvesting the estimated 440 terawatt-hours per year of tidal power there for the taking in the United States.

One terawatt-hour per year of electricity is enough to power 85,000 homes, so tidal power could make a substantial contribution to the US power supply.

Is your water safe? New method could tell

Hidden ‘lakes’ on Mars are more likely clay than water