STANFORD (US) — A biologist’s decades-long study of the collective behavior of harvester ant colonies has provided a rare real-time look at natural selection at work.

In ancient Greece, the city-states that waited until their own harvest was in before attacking and destroying a rival community’s crops often experienced better long-term success. 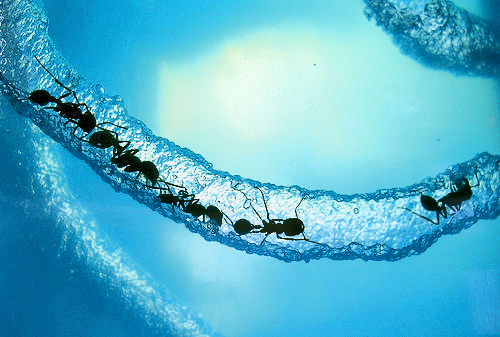 The ants use simple positive feedback interactions to regulate foraging activity. Foragers wait near the opening of the nest, and bump antennae with ants returning with food. The faster outgoing foragers meet ants returning with seeds, the more ants go out to forage. (Credit: Steve Jurvetson/Flickr)

The latest findings from Deborah M. Gordon’s long-term study of harvester ants shows that the colonies that restrain their foraging except in prime conditions experience improved rates of reproductive success.

Importantly, the study provides the first evidence of natural selection shaping collective behavior, says Gordon, a biology professor at Stanford University and a senior fellow at the Stanford Woods Institute for the Environment. The findings are published online in the journal Nature.

A long-held belief in biology has posited that the amount of food an animal acquires can serve as a proxy for its reproductive success. The hummingbirds that drink the most nectar, for example, stand the best chance of surviving to reproduce.

But the math isn’t always so straightforward. The harvester ants that Gordon studies in the desert in southeast Arizona, for instance, have to spend water to obtain water: an ant loses water while foraging, and obtains water from the fats in the seeds it eats.

The ants use simple positive feedback interactions to regulate foraging activity. Foragers wait near the opening of the nest, and bump antennae with ants returning with food. The faster outgoing foragers meet ants returning with seeds, the more ants go out to forage.

Gordon found that it’s more important for the ants to not waste water than to forage for every last piece of food. There’s no survival cost to this strategy, even though the colonies sometimes forgo foraging for an entire day. Instead, not only do the colonies that hunker down on the bad days live just as long as those that go all out, they also have more offspring colonies.

“Natural selection is not favoring the behavior that sends out the most ants to get the most food, but instead regulating foraging to hold back when conditions are bad,”says  Gordon, a biology professor at Stanford University. “This is natural selection shaping a collective behavior exhibited by the entire colony.”

Although the foraging activity of the offspring colonies and the parent colony didn’t entirely match up on all days, they were similar on extreme days: parent and offspring colonies made similar judgments about when to lie low or take advantage of ideal conditions.

While the region has experienced 10 to 15 years of protracted drought, and the more restrained colonies will most likely fare better reproductively as that trend continues, Gordon can’t yet say whether the emphasis on sustainability evolved in response to climate change pressures.

“What’s evolving here are simple rules for how ants participate in a network that regulates the collective behavior of the colony,” she says.