“Stranding rates for the region’s adult seals have generally not gone up as sea ice cover has declined; it’s the young-of-the-year animals who are stranding (those less than one year old),” says David Johnston, a research scientist at Duke University’s Nicholas School of the Environment.

“And it’s not just the weakest pups—those with low genetic diversity and presumably lower ability to adapt to environmental changes—that are stranding,” he says. “It appears genetic fitness has little effect on this.” 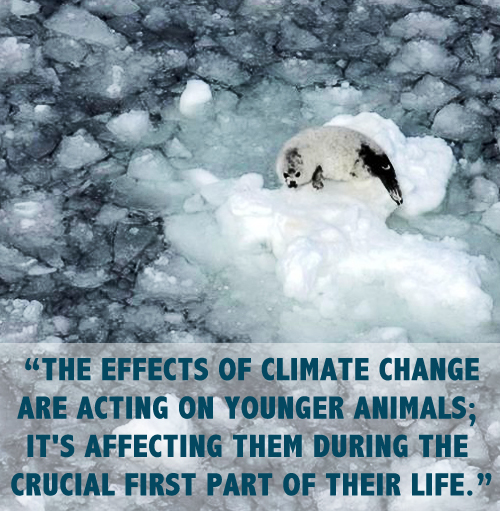 The study, published online this week in PLoS One, is the first to gauge the relative roles that genetic, environmental, and demographic factors such as age and gender may be playing in harp seal stranding rates along the US and Canadian east coasts in recent years.

Harp seals rely on stable winter sea ice as safe platforms to give birth and nurse their young until the pups can swim, hunt, and fend off predators for themselves. In years of extremely light ice cover, entire year-classes may be disappearing from the population, Johnston says.

The new study complements a Duke-led study published last year that found seasonal sea ice cover in all four harp seal breeding regions in the North Atlantic has declined by up to 6 percent a decade since 1979, when satellite records of ice conditions in the region began.

To expand upon the earlier study, researchers compared images of winter ice from 1992 to 2010 in a major whelping region off Canada’s east coast, the Gulf of St. Lawrence, with yearly reports of dead harp seal strandings along the US northeast coast that were grouped by gender and estimated age of the seal.

Researchers also compared DNA samples from 106 harp seals that had been stranded ashore with those from seals that had accidentally been caught by fishing boats in the region during the same period.

“We used measures of genetic diversity to determine if the dead seals that came ashore were less fit than the presumably healthy ones that had been caught by fishermen, but found no difference,” says Thomas Schultz, director of Duke’s Marine Conservation Molecular Facility.

“The stranded animals appear to have come from a genetically diverse population, and we have no evidence to suggest that genetic fitness played a role in their deaths.”

Male seals stranded more frequently than females during the study period, and that this relationship was strongest during light ice years.

“Our findings demonstrate that sea ice cover and demographic factors have a greater influence on harp seal stranding rates than genetic diversity,” says Brianne Soulen, who co-led the study while she was a master’s degree student in marine ecology.

The findings “provide more context for what we’re seeing in high-latitude species in general,” says Ph.D student Kristina Cammen. “The effects of climate change are acting on younger animals; it’s affecting them during the crucial first part of their life.”