U. CHICAGO (US) — American attitudes toward gays and lesbians are rapidly changing to reflect greater acceptance, with younger generations leading the way, a new survey shows.

In addition to a plurality who now approve of same-sex marriage, Americans overwhelmingly support basic civil liberties and freedom of expression for gays and lesbians, in contrast to sharp division on such issues in the 1970s.

Taken together, the results show a clear “trend toward greater tolerance regarding homosexuality,” says Tom Smith, director of the General Social Survey (GSS) at NORC at the University of Chicago and author of the report, “Public Attitudes toward Homosexuality.” 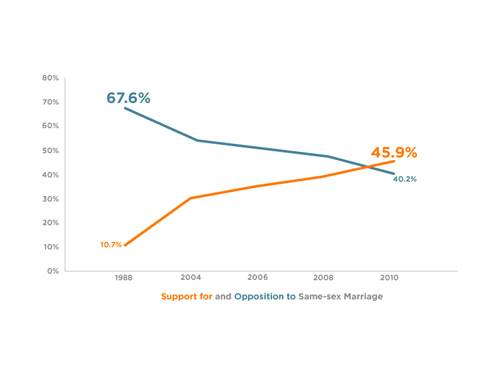 The rise in support for same-sex marriage has been especially dramatic over the last two decades. It went from 11 percent approval in 1988 to 46 percent in 2010, compared to 40 percent who were opposed, producing a narrow plurality in favor for the first time. The report is based on findings of the latest General Social Survey, conducted in 2010 with a cross sample of more than 2,000 people.

As a result of the generational division, public attitudes are sharply divided on the issue. Although 44 percent of the people surveyed felt that sexual relations between two adults of the same sex is always wrong, another 41 percent thought such relations were “not wrong at all.”

“Just 11 percent were in the middle, saying it was either ‘almost always wrong’ or ‘wrong only sometimes.’ Public opinion is thus highly polarized on this issue, with few people sharing the middle ground,” Smith says.

The GSS, which has been conducted biennially for 40 years, showed a marked increase in support of many civil liberties for gays and lesbians.

The change toward acceptance of homosexuality began in the late 1980s after years of remaining relatively constant. In 1973, 70 percent of people felt same-sex relations are “always wrong,” and in 1987, 75 percent held that view. By 2000, however, that number dropped to 54 percent and by 2010 was down to 43.5 percent.

Supported by the National Science Foundation, the General Social Survey monitors societal change and the growing complexity of American society. With the exception of the U.S. Census, the GSS is the most widely used source of information about social trends and attitudes.

NORC at the University of Chicago is an independent research organization headquartered in downtown Chicago, with offices on the University campus and in the Washington, D.C. area. NORC has a nationwide field staff as well as international research operations.

The average American household wastes $1,866 of food per year