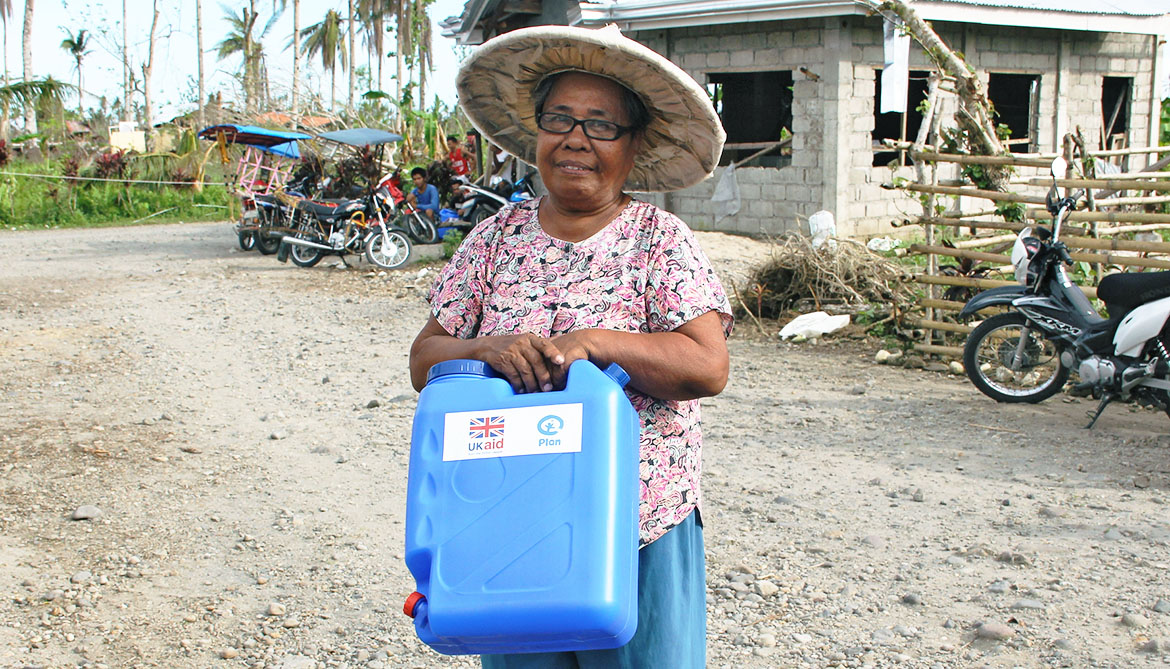 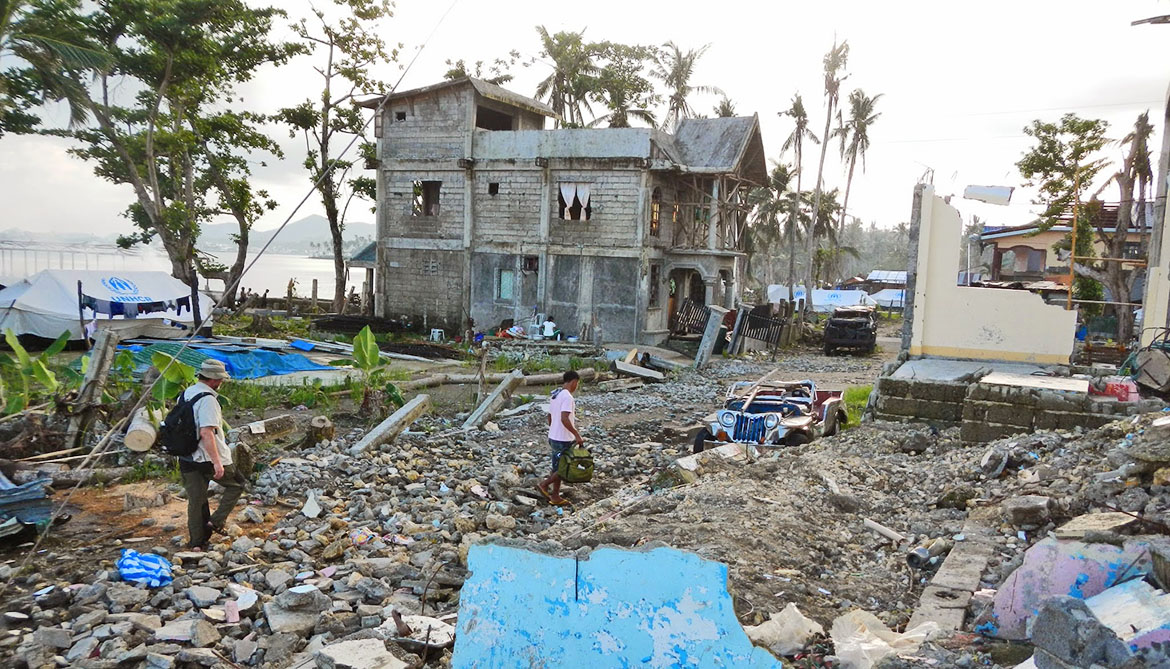 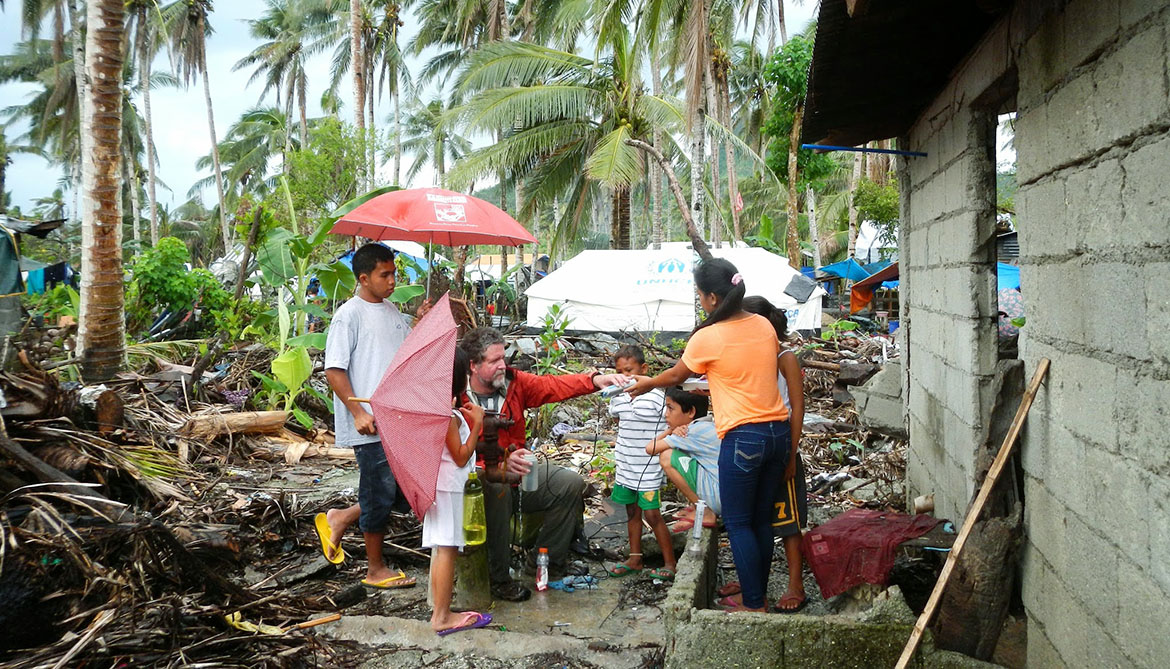 In 2013, Typhoon Haiyan devastated the Philippines, killing more than 6,000 people and destroying nearly $3 billion worth of property.

An aquifer on the island of Samar that was inundated with salt water by the storm surge could remain undrinkable for up to 10 years. Why has a second aquifer recovered much more quickly?

“Below-ground aquifer devastation from storm surge is unseen but need not be unforeseen.”

The difference is the surrounding geology, researchers say. The shallower of the two aquifers is made up of beach sand about 10 to 15 feet deep, which allowed the salt water soaked up from the surge to percolate to the water table and move through the aquifer for years to come.

In contrast, the other aquifer is largely shielded from seepage because of its depth and possibly an overlying layer of volcanic rock.

“There are two types of aquifers, contaminated in two different ways,” says Bayani Cardenas, an associate professor in the geological sciences department at the University of Texas at Austin.

Too salty to drink

The findings, published online in Geophysical Research Letters, clarify what makes aquifers vulnerable to storm surge contamination and what the contamination’s lasting effects will be—especially important to coastal populations as storms become stronger and more frequent because of climate change.

“Typically, when people think of flooding or sea level rise, they look at how it’s going to drown out villages and roads, but all these effects propagate underground where the aquifers are.”

Sponsored in part by the Jackson School of Geosciences’ rapid response program, a fund that supports research in areas recently affected by natural disasters, Cardenas and colleagues traveled to the village of San Antonio on Samar two months after the storm struck and took water samples from dozens of village wells that tapped into the aquifers.

The wells contained a median seawater concentration of 4.5 percent, with some containing as much as 17 percent seawater. Environmental standards in the United States set the concentration for drinking water below 1.3 percent.

When the team returned six months later, the salinity of the deeper aquifer was within drinkable levels, while wells to the shallower aquifer remained too salty. Using a computer model and villager testimony, researchers determined that water reached the aquifers in different ways.

For the deeper aquifer, the contamination most likely came from salt water entering through wells flooded by the storm surge. Because the contamination came all at once it was mostly swept out of the area en masse by freshwater naturally flowing through the aquifer and out to sea.

The majority of the village’s wells tap into the deeper aquifer, where water salinity now is largely within drinkable levels. Bacterial contamination, which the storm surge may have contributed to, remains an issue.

For the shallower aquifer, the model showed contamination is occurring in gradual doses, as the saltwater seeps through the sand to the water table.

“It slowly percolates,” Cardenas says. “So that’s the one that will take longer to recover.”

The saltwater may also reach the deeper aquifer through percolation, but it will be at more dilute concentrations. The findings show that coastal aquifers—and the people who depend on them—could be at risk of contamination in future storms.

“Since growing coastal populations will continue to rely on groundwater for their needs, strategies for reducing vulnerability to intense storm surge-caused groundwater contamination and mitigating its effects are needed,” the researchers write. “Below-ground aquifer devastation from storm surge is unseen but need not be unforeseen.”

Other researchers from UT Austin and from a Filipino environmental consulting company, a local aid group, and leaders and residents from the village contributed to the work.