WASHINGTON U. – ST. LOUIS (US) — About one-third the evolutionary rate of humans, the western painted turtle’s evolution is like its speed on the ground—exceedingly slow.

Scientists have decoded the genome of one of the most abundant turtles on Earth, finding clues to their longevity and ability to survive without oxygen during long winters spent hibernating in ice-covered ponds.

Researchers say understanding the natural mechanisms turtles use to protect the heart and brain from oxygen deprivation may one day improve treatments for heart attacks or strokes in people, both of which can lead to severe disability or death within minutes in patients deprived of oxygen. 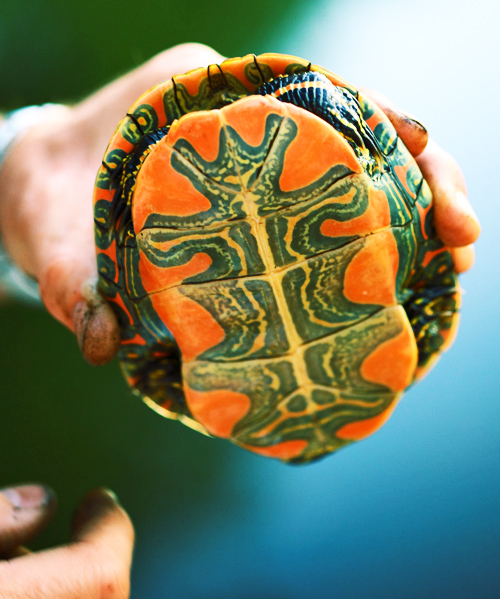 The western painted turtle is known for distinctive red markings on the underside of its shell. (Credit: D. Sharon Pruitt/Flickr)

Turtles have evolved a distinctive body design that has changed little over the past 210 million years, the authors note. Unlike other reptiles, turtles sport a sharp beak instead of teeth and live encased in a hard shell, a convenient home in which to hide when danger lurks.

“Turtles are nothing short of an enigma,” says Richard K. Wilson, director of the Genome Institute at Washngton University in St. Louis and senior author of the study published in Genome Biology.

“They may be slowly evolving, but turtles have developed an array of enviable features. They resist growing old, can reproduce even at advanced ages, and their bodies can freeze solid, thaw, and survive without damaging delicate organs and tissues. We could learn a lot from them.”

The western painted turtle lives in freshwater ponds and streams and is the most widespread turtle in North America. It holds the distinction of being the first turtle and only the second reptile to have its genome sequenced. Comparing the turtle’s DNA to that of other animals, the scientists show that turtles are more closely related to birds than to lizards and snakes.

A close look at the turtle genome reveals that these creatures do not rely on novel genes for their unique physiological adaptions, such as the ability to withstand oxygen deprivation. Rather, they activate gene networks common to most vertebrates, including humans, but use those genes in different ways.

“This is a back door route for turtles to evolve,” says co-author Patrick Minx of The Genome Institute. “Rather than evolve new genes, they adapted existing genes for new uses.”

For example, the scientists identified 19 genes in the brain and 23 in the heart that are activated in low-oxygen conditions, including one gene, APOLD1, whose expression is increased nearly 130 fold. These genes also are present in humans and may be important candidates to explore for treatments to reduce tissue damage due to oxygen deprivation.

Like other turtles, painted turtles are slow to age and are known for their long life spans. They become sexually mature at about 5 years of age and can live for 40 or more years in the wild. While impressive, some other turtle species don’t reach sexual maturity until their 40s and can live for well over a century.

Indeed, it is the long lapse of time from one generation to the next that is at the root of turtles’ slow evolution. Living longer gives them fewer opportunities to evolve, Minx says.

The researchers also identified common patterns of gene loss in the turtle associated with longevity, sex determination, and a lack of teeth, findings that warrant further investigation.

One aspect of turtle evolution that is progressing rapidly is their threat of extinction. As many as half the 330 turtle species worldwide are considered threatened, making them the most endangered major group of vertebrates on a global scale. Their demise is due, in part, to human consumption, encouraged by unsubstantiated but persistent claims that eating turtles can increase life expectancy and cure cancer.

Habitat loss and modification are also important, but it is turtles’ popularity on restaurant menus and dinner tables, particularly in Asia, that is the biggest reason for their global decline, the researchers say.

“The challenge is to preserve the rich diversity of turtles that still exist on Earth as we continue to unravel their secrets for success,” says first author H. Bradley Shaffer of the University of California at Los Angeles. “Turtles have a tremendous amount to tell us about evolution and human health, but time is running out.”

The National Human Genome Research Institute at the National Institutes of Health funded the research.

New models may upend the origins of ocean animals