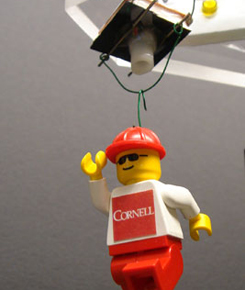 Paul Steen and Michael Vogel’s surface tension-based adhesive device with a lego man payload. The researchers demonstrate a larger version of their switchable adhesive device in this video. The rapid adhesion mechanism could lead to such applications as shoes or gloves that stick and unstick to walls. (Credit: Michael Vogel)

CORNELL (US)—A palm-sized device that uses water surface tension as an adhesive bond might one day make it possible for mere mortals to climb walls like Spider-Man.

The device is the result of inspiration drawn not from a spider, but from a beetle native to Florida that can adhere to a leaf with a force 100 times its own weight, yet also instantly unstick itself.

The rapid adhesion mechanism could lead to such applications as shoes or gloves that stick and unstick to walls, or Post-it-like notes that can bear loads, according to Paul Steen, professor of chemical and biomolecular engineering at Cornell University, who invented the device with Michael Vogel, a former postdoctoral associate.

Research behind the device is published online in Proceedings of the National Academy of Sciences.

The device consists of a flat plate patterned with holes, each on the order of microns (one-millionth of a meter). A bottom plate holds a liquid reservoir, and in the middle is another porous layer. An electric field applied by a common 9-volt battery pumps water through the device and causes droplets to squeeze through the top layer. The surface tension of the exposed droplets makes the device grip another surface—much the way two wet glass slides stick together.

“In our everyday experience, these forces are relatively weak,” Steen says. “But if you make a lot of them and can control them, like the beetle does, you can get strong adhesion forces.”

For example, one of the researchers’ prototypes was made with about 1,000 300-micron-sized holes, and it can hold about 30 grams—more than 70 paper clips. They found that as they scaled down the holes and packed more of them onto the device, the adhesion got stronger. They estimate, then, that a one-square-inch device with millions of 1-micron-sized holes could hold more than 15 pounds.

To turn the adhesion off, the electric field is simply reversed, and the water is pulled back through the pores, breaking the tiny “bridges” created between the device and the other surface by the individual droplets.

One of the biggest challenges in making these devices work, Steen said, was keeping the droplets from coalescing, as water droplets tend to do when they get close together. To solve this, they designed their pump to resist water flow while it’s turned off.

Steen envisions future prototypes on a grander scale, once the pump mechanism is perfected, and the adhesive bond can be made even stronger. He also imagines covering the droplets with thin membranes—thin enough to be controlled by the pump but thick enough to eliminate wetting. The encapsulated liquid could exert simultaneous forces, like tiny punches.

“You can think about making a credit card-sized device that you can put in a rock fissure or a door, and break it open with very little voltage,” Steen says. “It’s a fun thing to think about.”

The research was funded primarily by the Defense Advanced Research Projects Agency, and also by the National Science Foundation.