U. BUFFALO (US) — At very small scales, it may be possible to create quantum dots that are magnetic, even if their electrons have opposing spins.

The findings could have important implications for using magnets in novel ways to advance technologies including lasers, medical imaging devices, and, importantly, computers.

All electrons possess spin which determines magnetism.  Individual spins are akin to tiny bar magnets, which have north and south poles. Electrons can have an up or down spin, and a material is magnetic when most of its electrons’ spins are the same.

Mobile electrons act as “magnetic messengers,” using their own spin to align the spins of nearby atoms. If two mobile electrons with opposite spins are in an area, conventional wisdom says that their influences should cancel out, leaving a material without magnetic properties.

But in a new study, published in the journal Physical Review Letters, researchers describe a theoretical scenario involving a quantum dot that contains two free-floating, mobile electrons with opposite spins, along with manganese atoms fixed at precise locations within the quantum dot.

Under these circumstances, conventional thinking would predict a stalemate: Each mobile electron exerts an equal influence over spins of manganese atoms, so neither is able to “win.”

This prediction, if proven, could “completely alter the basic notions that we have about magnetic interactions,” says Igor Žutić, associate professor and theoretical physicist at the University at Buffalo.

“When you have two mobile electrons with opposite spins, the assumption is that there is a nice balance of up and down spins, and therefore, there is no magnetic message, or nothing that could be sent to align nearby manganese spins,” he says.

“But what we are saying is that it is actually a tug of war. The building blocks of magnetism are still mysterious and hold many surprises.”

Previous studies by Athos Petrou, professor of physics at University at Buffalo have demonstrated that in a quantum dot with just one mobile electron, the mobile electron will act as a magnetic messenger, robustly aligning the spins of adjacent manganese atoms.

Now, Petrou is interested in taking the research a step further and testing the tug-of-war prediction for two-electron quantum dots, Žutić says. 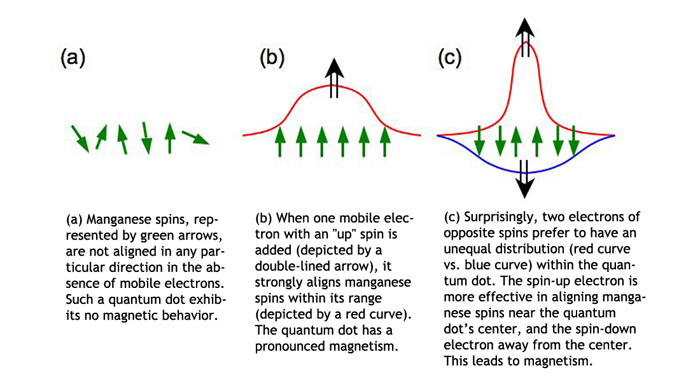 Spintronics are able to store and process data by exploiting electrons’ “up” and “down” spins.

Future energy-saving improvements in data processing could include devices that process information by “flipping” spin instead of shuttling electrons around.

Studying how magnetism works on a small scale is particularly important, Žutić says, because “we would like to pack more information into less space.”

Researchers from the South Dakota School of Mines and Technology contributed to the study.