PENN STATE (US) — Plumbing systems may be a common source of human infections, say researchers studying the prevalence of the fungus Fusarium in bathroom sink drains.

They analyzed fungal DNA to compare the spectrum of Fusarium species and sequence types found in drains with those recovered from human infections. 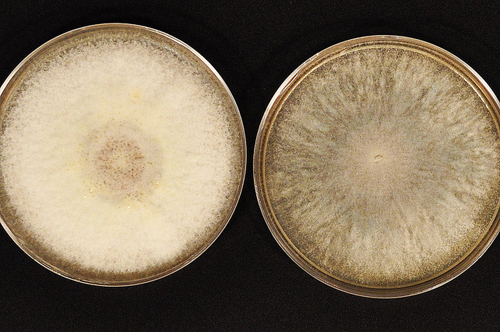 The Fusarium species cultured here are commonly found in sink drains. A new study found that about 70 percent of Fusarium samples taken from drains belong to one of the six genetic types most often associated with human infections. (Credit: Penn State Department of Public Information)

The study identified at least one Fusarium isolate in 66 percent of the drains and in 82 percent of the buildings. About 70 percent of those isolates came from the six sequence types of Fusarium most frequently associated with human infections.

“With about two-thirds of sinks found to harbor Fusarium, it’s clear that those buildings’ inhabitants are exposed to these fungi on a regular basis,” says lead investigator Dylan Short, who recently completed his doctorate in plant pathology. “This strongly supports the hypothesis that plumbing-surface biofilms serve as reservoirs for human pathogenic fusaria.”

The researchers published their results in the December issue of the Journal of Clinical Microbiology.

Fusarium may be best known for causing a variety of diseases in agricultural crops. In Pennsylvania, Fusarium diseases of grains and greenhouse crops are of particular concern. Fusarium species also produce mycotoxins in association with plants, causing a direct health threat to animals and humans that eat the plants.

Some species of Fusarium also cause opportunistic and sometimes fatal infections in humans, typically entering the body through wounds or trauma, via catheters and intravenous devices or by introduction of a biofilm to the eye.

While relatively rare, Fusarium infections can be difficult to treat because of the organism’s resistance to many antifungal drugs. Those most at risk are individuals with weak or compromised immune systems.

In one high-profile case, Fusarium was found to have caused a widely publicized 2005-06 outbreak of fungal keratitis—infection of the cornea—among contact-lens wearers.

“In the recent outbreaks of fungal keratitis in Southeast Asia and North America connected to contact-lens use, plumbing systems were the main environmental sources of the most frequent Fusarium species and sequence types associated with eye infections,” Short says.

He explains that biofilms on plumbing surfaces are known to comprise a diverse spectrum of fungi and other microbes. “Based on its very high frequency, it is clear that Fusarium is a ubiquitous component of biofilm microbial communities in plumbing systems,” he says. “The adaptations that make Fusarium biofilm growth possible also may facilitate infection of humans.

“For example, in the 2005-06 mycotic keratitis outbreak, it was hypothesized that improper use of a contact lens solution led to reduced efficacy of its antimicrobial properties, which allowed fusaria to establish biofilms on contact lens surfaces and in lens cases,” he says.

“The biofilm also may play an important role in established infections in humans by protecting the fungus from drug treatments, since biofilm-phase fusaria tend to be more resistant to antifungal drugs than those growing in a fluid medium.”

Of the 59 sequence types identified from sinks in this study, 32 had not been found in previous multilocus sequence typing studies of Fusarium. These novel types included members of four apparently new Fusarium species.

David Geiser, professor of plant pathology and a member of the research team, pointed out that the serious infections caused by fusaria are relatively uncommon and that these fungi may even play positive roles in plumbing systems. But he said the study provides the strongest evidence to date supporting an epidemiological link between human fusarioses and plumbing systems.

“Our apparently constant physical proximity to these fungi belies their relative obscurity in terms of public awareness and understanding by the scientific community,” says Geiser, who also is director of Penn State’s Fusarium Research Center, which houses the world’s largest collection of Fusarium.

“The species involved offer significant potential for studying host-microbe interactions, novel metabolic activities—including the production of mycotoxins and antibiotics—and the roles of microbes in indoor environments,” he says.

New clues to pathogen’s switch from yeast to hypha