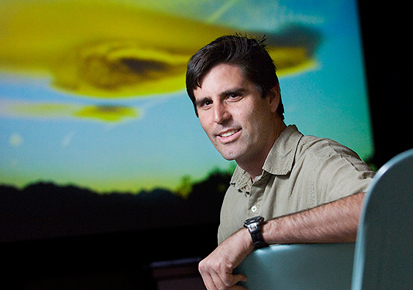 If the world allows carbon- and air pollution-emitting energy sources to play a substantial role in the future energy mix, Mark Jacobson says, global temperatures and health problems will only continue to increase. (Credit: L.A. Cicero)

STANFORD (US)—Most of the technology needed to shift the world from fossil fuel to clean, renewable energy already exists. A new report suggests that implementing that technology requires overcoming obstacles in planning and politics, but doing so could result in a 30 percent decrease in global power demand.

To make clear the extent of those hurdles—and how they could be overcome—Stanford University civil and environmental engineering professor Mark Jacobson and University of California-Davis researcher Mark Delucchi have written an article that is the cover story in the November issue of Scientific American.

In it, they present new research mapping out and evaluating a quantitative plan for powering the entire world on wind, water, and solar energy, including an assessment of the materials needed and costs. And it will ultimately be cheaper than sticking with fossil fuel or going nuclear, they say.

The key is turning to wind, water, and solar energy to generate electrical power—making a massive commitment to them—and eliminating combustion as a way to generate power for vehicles as well as for normal electricity use.

The problem lies in the use of fossil fuels and biomass combustion, which are notoriously inefficient at producing usable energy. For example, when gasoline is used to power a vehicle, at least 80 percent of the energy produced is wasted as heat.

With vehicles that run on electricity, it’s the opposite. Roughly 80 percent of the energy supplied to the vehicle is converted into motion, with only 20 percent lost as heat. Other combustion devices can similarly be replaced with electricity or with hydrogen produced by electricity.

Jacobson and Delucchi used data from the U.S. Energy Information Administration to project that if the world’s current mix of energy sources is maintained, global energy demand at any given moment in 2030 would be 16.9 terawatts, or 16.9 million megawatts.

They then calculated that if no combustion of fossil fuel or biomass were used to generate energy, and virtually everything was powered by electricity—either for direct use or hydrogen production—the demand would be only 11.5 terawatts. That’s only two-thirds of the energy that would be needed if fossil fuels were still in the mix.

In order to convert to wind, water and solar, the world would have to build wind turbines; solar photovoltaic and concentrated solar arrays; and geothermal, tidal, wave, and hydroelectric power sources to generate the electricity, as well as transmission lines to carry it to the users, but the long-run net savings would more than equal the costs, according to Jacobson and Delucchi’s analysis.

“If you make this transition to renewables and electricity, then you eliminate the need for 13,000 new or existing coal plants,” Jacobson says. “Just by changing our infrastructure we have less power demand.”

Jacobson and Delucchi chose to use wind, water, and solar energy options based on a quantitative evaluation Jacobson did last year of about a dozen of the different alternative energy options that were getting the most attention in public and political discussions and in the media. He compared their potential for producing energy, how secure an energy source each was, and their impacts on human health and the environment.

He determined that the best overall energy sources were wind, water, and solar options. His results were published in Energy and Environmental Science.

The Scientific American article provides a quantification of global solar and wind resources based on new research by Jacobson and Delucchi.

Analyzing only on-land locations with a high potential for producing power, they found that even if wind were the only method used to generate power, the potential for wind energy production is 5 to 15 times greater than what is needed to power the entire world. For solar energy, the comparable calculation found that solar could produce about 30 times the amount needed.

If the world built just enough wind and solar installations to meet the projected demand for the scenario outlined in the article, an area smaller than the borough of Manhattan would be sufficient for the wind turbines themselves. Allowing for the required amount of space between the turbines boosts the needed acreage up to 1 percent of Earth’s land area, but the spaces between could be used for crops or grazing. The various non-rooftop solar power installations would need about a third of 1 percent of the world’s land, so altogether about 1.3 percent of the land surface would suffice.

The study further provides examples of how a combination of renewable energy sources could be used to meet hour-by-hour power demand, addressing the commonly asked question, given the inherent variability of wind speed and sunshine, can these sources consistently produce enough power? The answer is yes.

Expanding the transmission grid would be critical for the shift to the sustainable energy sources that Jacobson and Delucchi propose. New transmission lines would have to be laid to carry power from new wind farms and solar power plants to users, and more transmission lines will be needed to handle the overall increase in the quantity of electric power being generated.

The researchers also determined that the availability of certain materials that are needed for some of the current technologies, such as lithium for lithium-ion batteries, or platinum for fuel cells, are not currently barriers to building a large-scale renewable infrastructure. But efforts will be needed to ensure that such materials are recycled and potential alternative materials are explored.

Finally, they conclude that perhaps the most significant barrier to the implementation of their plan is the competing energy industries that currently dominate political lobbying for available financial resources. But the technologies being promoted by the dominant energy industries are not renewable and even the cleanest of them emit significantly more carbon and air pollution than wind, water, and sun resources, say Jacobson and Delucchi.

If the world allows carbon- and air pollution-emitting energy sources to play a substantial role in the future energy mix, Jacobson says, global temperatures and health problems will only continue to increase.

Living near oil or gas wells may up preterm birth risk