GEORGIA TECH (US) — Engineers are developing a wireless device that enables people with spinal cord injuries to operate a computer and maneuver a wheelchair simply by moving their tongues.

The newest prototype of the Tongue Drive System allows users to wear an inconspicuous dental retainer embedded with sensors to control the system. The sensors track the location of a tiny magnet attached to the tongues of users.

In earlier versions of the system, the sensors that track the movement of the magnet on the tongue were mounted on a headset worn by the user. 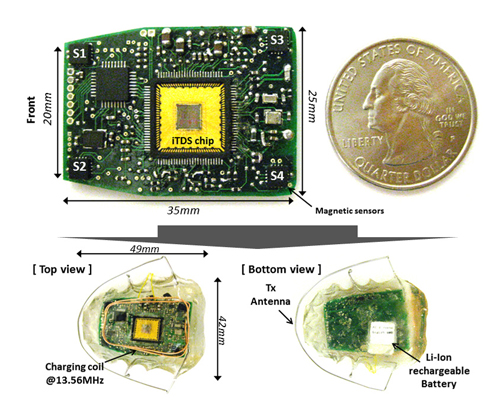 The dental appliance for the new intraoral Tongue Drive System contains magnetic field sensors mounted on its four corners that detect movement of a tiny magnet attached to the tongue. It also includes a rechargeable lithium-ion battery and an induction coil to charge the battery. The circuitry fits in the space available on the retainer, which sits against the roof of the mouth and is covered with an insulating, water-resistant material and vacuum-molded inside standard dental acrylic. (Credit: Maysam Ghovanloo)

“By moving the sensors inside the mouth, we have created a Tongue Drive System with increased mechanical stability and comfort that is nearly unnoticeable,” says Maysam Ghovanloo, an associate professor in the School of Electrical and Computer Engineering at the Georgia Institute of Technology.

The new intraoral Tongue Drive System was presented and demonstrated on February 20, 2012 at the IEEE International Solid-State Circuits Conference in San Francisco. The National Institutes of Health, National Science Foundation, and Christopher and Dana Reeve Foundation support development of the system.

The new dental appliance contains magnetic field sensors mounted on its four corners that detect movement of a tiny magnet attached to the tongue. It also includes a rechargeable lithium-ion battery and an induction coil to charge the battery.

The circuitry fits in the space available on the retainer, which sits against the roof of the mouth and is covered with an insulating, water-resistant material and vacuum-molded inside standard dental acrylic.

“One of the problems we encountered with the earlier headset was that it could shift on a user’s head and the system would need to be recalibrated,” explains Ghovanloo.

“Because the dental appliance is worn inside the mouth and molded from dental impressions to fit tightly around an individual’s teeth with clasps, it is protected from these types of disturbances.”

When in use, the output signals from the sensors are wirelessly transmitted to an iPod or iPhone. Software installed on the iPod interprets the user’s tongue commands by determining the relative position of the magnet with respect to the array of sensors in real-time. This information is used to control the movements of a cursor on the computer screen or to substitute for the joystick function in a powered wheelchair.

Ghovanloo and his team have also created a universal interface for the intraoral Tongue Drive System that attaches directly to a standard electric wheelchair. The interface boasts multiple functions: It not only holds the iPod, but also wirelessly receives the sensor data and delivers it to the iPod, connects the iPod to the wheelchair, charges the iPod, and includes a container where the dental retainer can be placed at night for charging.

In preliminary tests, the intraoral device exhibited an increased signal-to-noise ratio, even when a smaller magnet was placed on the tongue. That improved sensitivity could allow additional commands to be programmed into the system. The existing Tongue Drive System that uses a headset interprets commands from seven different tongue movements.

The ability to train the system with additional commands—as many commands as an individual can comfortably remember—and having all of the commands available to the user at the same time are significant advantages over the common sip-n-puff device that acts as a simple switch controlled by sucking or blowing through a straw.

The researchers plan to begin testing the usability of the intraoral Tongue Drive System by able-bodied individuals soon and then move onto clinical trials to test its usability by people with high-level spinal cord injuries.

In recent months, Ghovanloo and his team have recruited 11 individuals with high-level spinal cord injuries to test the headset version of the system at the Atlanta-based Shepherd Center and the Rehabilitation Institute of Chicago.

Trial participants received a clinical tongue piercing and tongue stud that contained a tiny magnet embedded in the upper ball. They repeated two test sessions per week during a six-week period that assessed their ability to use the Tongue Drive System to operate a computer and navigate an electric wheelchair through an obstacle course.

“During the trials, users have been able to learn to use the system, move the computer cursor quicker and with more accuracy, and maneuver through the obstacle course faster and with fewer collisions,” says Ghovanloo.

“We expect even better results in the future when trial participants begin to use the intraoral Tongue Drive System on a daily basis.”

Physics outreach programs are a win-win for students, community