WASHINGTON U.-ST. LOUIS (US) — Archaeologists have discovered the tomb of one of the great queens of Classic Maya civilization.

The tomb of Lady K’abel, a seventh-century Maya Holy Snake Lord, was discovered during excavations of the royal Maya city of El Perú-Waka’ in northwestern Petén, Guatemala, by a team led by David Freidel, co-director of the expedition.

A small, carved alabaster jar found in the burial chamber caused the archaeologists to conclude the tomb was that of Lady K’abel. 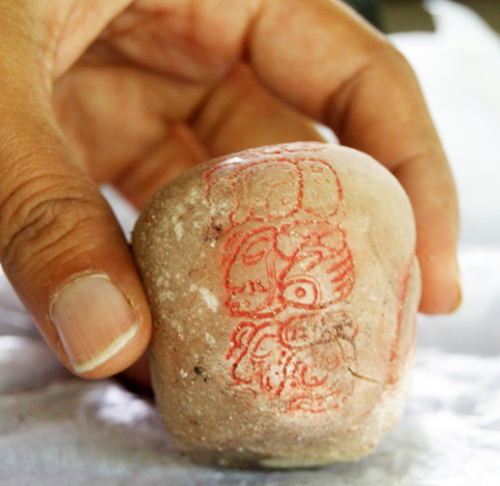 Another view of the carved vessel. 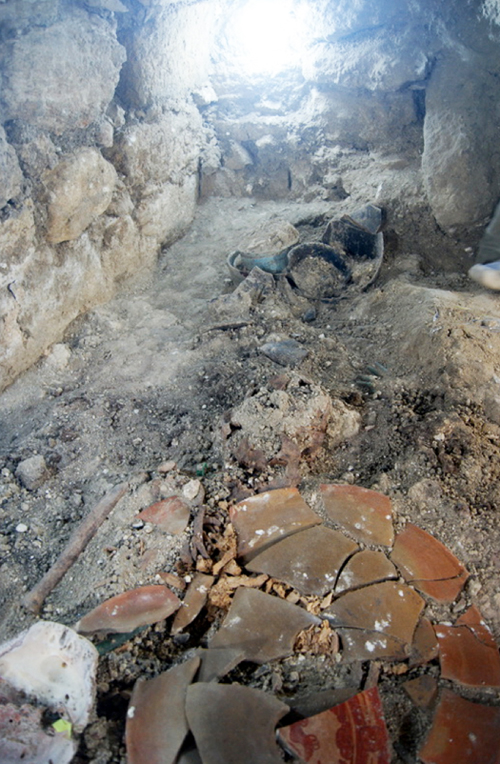 The white jar is carved as a conch shell, with a head and arm of an aged woman emerging from the opening. The depiction of the woman, mature with a lined face and a strand of hair in front of her ear, and four glyphs carved into the jar, point to the jar as belonging to K’abel.

Based on this and other evidence, including ceramic vessels found in the tomb and stela (large stone slab) carvings on the outside, the tomb is likely that of K’abel, says Freidel, an anthropology professor at Washington University in St. Louis.

Freidel says the discovery is significant not only because the tomb is that of a notable historical figure in Maya history, but also because the newly uncovered tomb is a rare situation in which Maya archaeological and historical records meet.

“The Classic Maya civilization is the only ‘classical’ archaeological field in the New World—in the sense that like archaeology in Ancient Egypt, Greece, Mesopotamia or China, there is both an archaeological material record and an historical record based on texts and images,” Freidel says.

“The precise nature of the text and image information on the white stone jar and its tomb context constitute a remarkable and rare conjunction of these two kinds of records in the Maya area.”

The discovery of the tomb of the great queen was “serendipitous, to put it mildly,” Freidel says.

The team at El Perú-Waka’ has focused on uncovering and studying “ritually charged” features such as shrines, altars, and dedicatory offerings rather than on locating burial locations of particular individuals.

“In retrospect, it makes a lot of sense that the people of Waka’ buried her in this particularly prominent place in their city,” Freidel notes.

Olivia Navarro-Farr, assistant professor of anthropology at the College of Wooster in Ohio, originally began excavating the locale while still a doctoral student of Freidel’s. Continuing to investigate this area this season was of major interest to both she and Freidel because it had been the location of a temple that received much reverence and ritual attention for generations after the fall of the dynasty at El Perú.

With the discovery, archaeologists now understand the likely reason why the temple was so revered: K’abel was buried there, Freidel says.

K’abel, considered the greatest ruler of the Late Classic period, ruled with her husband, K’inich Bahlam, for at least 20 years (672-692 AD), Freidel says. She was the military governor of the Wak kingdom for her family, the imperial house of the Snake King, and she carried the title “Kaloomte’,” translated to “Supreme Warrior,” higher in authority than her husband, the king.

K’abel also is famous for her portrayal on the famous Maya stela, Stela 34 of El Perú, now in the Cleveland Art Museum.

This discovery was made under the auspices of the National Institute of Anthropology and History in Guatemala. The El Perú-Waka’ project is sponsored by the Foundation for the Cultural and Natural Patrimony of Guatemala.

The project was originally funded by the Jerome E. Glick Foundation of St. Louis and has received support from the Alphawood Foundation, the National Geographic Society, the National Science Foundation and the US Department of the Interior, in addition to private benefactors.

Why the US stands out for fatal police violence