NORTHWESTERN (US) — A new computational approach identifies interventions that can both rescue complex networks from the brink of failure and reprogram them to a desired task, report researchers.

As the world becomes increasingly connected, the need to ensure the proper functioning of its many underlying networks—such as the internet, power grids, global air transportation, and ecological networks—also is increasing. But controlling networks is very difficult.

“A fundamental property of networks is that a perturbation to one node can affect other nodes, potentially causing the entire system to change behavior or fail,” says Adilson E. Motter, who supervised the research.

“We have turned this principle on its head for something positive: to control network behavior. This novel approach to control could have a transformative impact on the field of complex networks.” 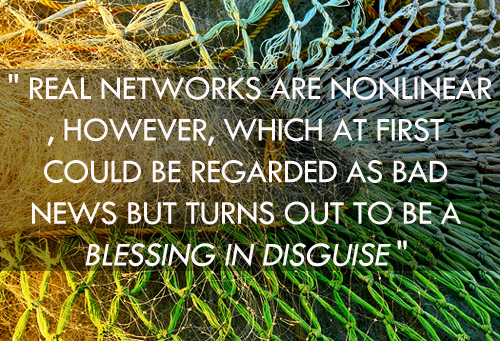 “Real networks are nonlinear, however, which at first could be regarded as bad news but turns out to be a blessing in disguise,” says lead author Sean P. Cornelius. “In the case of complex networks, ignoring nonlinearity would be like throwing out the baby with the bath water.” (Credit: Pandiyan/Flickr)

In a demonstration of its broad applicability, Motter and his colleagues used their framework both to mitigate cascading failures in a power-grid network and to identify potential drug targets in a biochemical signaling network of human cancer. The findings are published in Nature Communications.

The same connections that provide functionality in networks also can serve as conduits for the propagation of failures and instabilities, says Motter, professor of physics and astronomy at Northwestern University.

The emergence of global air transportation and computer networks, for example, brings obvious benefits but at the price of facilitating the spread of diseases and malware.

Furthermore, ecological networks are increasingly affected by perturbations stemming from human actions, and a growing number of human diseases are being linked to malfunction of cellular and molecular networks.

Networks defy human control, however, even in the simplest cases, not only because complex networks consist of a large number of complicatedly connected parts but mainly because they respond nonlinearly to disturbances: A small disturbance can create a disproportionately large problem.

“Previous and recent research on network control done in the network science community has focused mainly on linear models, for the excellent reason that it is in principle much simpler to manipulate linear dynamics,” says lead author Sean P. Cornelius, a graduate student in Motter’s research group.

“Real networks are nonlinear, however, which at first could be regarded as bad news but turns out to be a blessing in disguise,” Cornelius says. “In the case of complex networks, ignoring nonlinearity would be like throwing out the baby with the bath water.”

Key to the authors’ framework is their accounting of this nonlinear nature of the dynamics in real networks. In such systems, the size of the response is generally not proportional to the size of the disturbance. Accordingly, small control interventions can lead to a large response that propagates through the entire network, rescuing or reprogramming it.

A breakthrough in the newly developed control approach is the development of a computational method that identifies small perturbations, which, after propagating through the network, will bring the system to the desired final state.

In the parlance of dynamical systems theory, the authors exploit what are known as “basins of attraction”—sets of network states that eventually will converge to a given stable state (or “attractor”) of the system.

A complicating factor in the networks under consideration is that, in practice, control interventions applied by humans only can modulate a very small fraction of all nodes in the network. The new framework helps identify the critical nodes for controlling large networks.

“This can be one node out of tens, hundreds, or even thousands of nodes, depending on the application,” says Motter.

“In treating a disease, for example, doctors cannot directly control all of the many thousand genes in a cell, but we can hope to influence them indirectly by manipulating a few key genes that will then influence the others.”

In an application to a form of cancer caused by abnormal survival of certain white blood cells, the researchers were able to identify potential curative interventions mediated by the control of only three genes or proteins, on average.

The researchers also applied their framework to a simple model of power-grid networks. “In these networks, it is critical that the power generators be synchronized with one another,” Cornelius says. “But, under certain conditions, this state of affairs can be disrupted by, say, a tree falling on a power line.”

The authors show that by manipulating only a portion of the variables, it is in principle possible to restore power-grid synchrony following severe disturbances.

Similar results are relevant for the control of cascading failures in diverse systems, for ecosystems management and potentially for the mitigation of financial crises.