U. NOTTINGHAM (UK) — Scientists studying loss of bone and muscle mass among astronauts find that spaceflight’s effects on microscopic worms may help them live longer.

The researchers discovered that spaceflight suppresses accumulation of toxic proteins that normally accumulate within aging muscle.

In addition, they report that a group of genes are expressed at lower levels during spaceflight. When the expression of these same genes was lowered in the worms back on Earth, they lived longer. 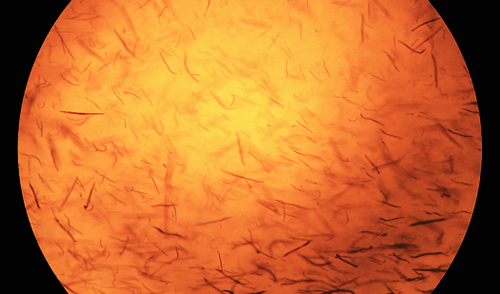 In addition to the worms, seen here after their return from space, the researchers will soon study Dutch astronaut Andre Kuipers. (Credit: U. Nottingham)

Nathaniel Szewczyk, from the University of Nottingham, was part of the ICE-FIRST project that involved scientists from Japan, France, the US, and Canada, and whose findings are published in the online journal Scientific Reports.

Szewczyk, an expert in muscle metabolism, says: “We identified seven genes, which were down-regulated in space and whose inactivation extended lifespan under laboratory conditions.”

How do these genes play a role in longevity control?

“We are not entirely certain, but it would appear that these genes are involved in how the worm senses the environment and signals changes in metabolism in order to adapt to the environment.

“For example, one of the genes we have identified encodes insulin, which, because of diabetes, is well known to be associated with metabolic control. In worms, flies, and mice insulin is also associated with modulation of lifespan.”

What could this mean for space travelers?

“Well, most of us know that muscle tends to shrink in space. These latest results suggest that this is almost certainly an adaptive response rather than a pathological one. Counter-intuitively, muscle in space may age better than on Earth. It may also be that spaceflight slows the process of aging.”

Szewczyk’s role was to provide expertise in the culturing of worms in CeMM—a special liquid food for worms. He transported the samples to and from the Russian launch site and ran a series of ‘health’ checks to ensure that the tiny astronauts were fit for flying. On their return he helped with the analysis of the data.

From rubbish to space

Szewczyk studies the signals that control muscle protein degradation in the human body. C. elegans is the perfect substitute for studying long-term changes in human physiology because they suffer from muscle atrophy—muscle loss—under many of the same conditions that people do.

C. elegans was the first multi-cellular organism to have its genetic structure completely mapped and many of its 20,000 genes perform the same functions as those in humans. Two thousand of these genes have a role in promoting muscle function and 50 to 60 percent of these have very obvious human counterparts.

Szewczyk was working at NASA when the research began, and he is now based at Nottingham’s MRC and Arthritis Research UK Center for Musculoskeletal Ageing Research.

The experiment in 2004 involved a consignment of live worms being dispatched to the International Space Station (ISS) onboard the Dutch DELTA mission.

He uses worms that originate from a rubbish dump in Bristol. C. elegans often feed on decaying fruit and vegetable matter. They have since taken part in five spaceflights to the ISS with the aim of learning more about the effect of microgravity on the physiology of the human body.

In 2003 Szewczyk’s C. elegans made the news when they survived the Space Shuttle Columbia disaster. Living in petri dishes and enclosed in aluminum canisters, the worms survived re-entry and impact on the ground and were recovered weeks after the disaster.

This spaceflight work teaches us things about the body that we couldn’t learn on Earth. They have led to the publication of research into how to block muscle degradation using a form of gene therapy in PLoS ONE and publication of a muscle repair mechanism in PLoS Genetics.

The work on C. elegans has also established that worms can live and reproduce for at least six months in space. This makes it an ideal and cost-effective experimental system to investigate the effects of long duration and distance space exploration as recently reported in Interface.

Together these missions have established that the team is not only better able to understand how muscle works on Earth but they are also in a position to send worms to other planets and experiment on them along the way.

Another member of the Center’s team is currently examining the effects of spaceflight upon the muscles of the current European record holder for time spent in space.

Andre Kuipers, the Dutch astronaut who flew the mission in 2004, has just returned from ISS with yet another worm experiment for the team, Kuipers is also the subject of an experiment led by Professor Marco Narici to investigate the effects of long-duration spaceflight on human muscle.