GEORGIA TECH (US) — Sending children with asthma a daily text message asking about their symptoms and offering information about their condition can lead to improved health and fewer doctor visits.

Pediatric patients who were asked questions about their symptoms and provided information about asthma via SMS text messages showed improved pulmonary function and a better understanding of their condition within four months, compared to other groups.

“It appears that text messages acted as an implicit reminder for patients to take their medicine and by the end of the study, the kids were more in tune with their illness,” says Rosa Arriaga, senior research scientist in the College of Computing’s School of Interactive Computing at Georgia Insitute of Technology (Georgia Tech). 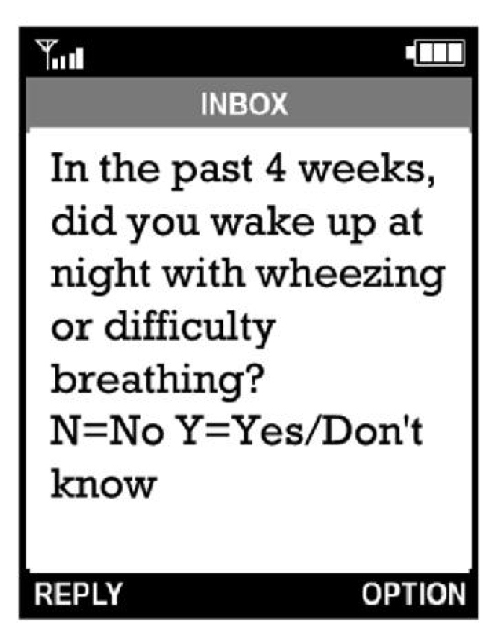 Children in the second intervention group received a question about their asthma symptoms (see example above) via text every other day. (Credit: Georgia Tech)

The results of the research hold promise for the future of mHealth studies, a trend based on the idea that mobile devices can be used to improve health and wellness.

Asthma is the most prevalent chronic respiratory disorder in the US, affecting about 17.3 million people, including more than 5 million children. Medication is the main way patients manage symptoms, but research shows less than 30 percent of teens use their inhalers regularly.

Texting, on the other hand, is something teens do regularly and enjoy. Nearly 75 percent of American teens have mobile devices. The researchers were interested in seeing if this ubiquitous, easy-to-use technology could help young patients manage their asthma.

The children were between 10 and 17 years old, owned a mobile phone, and could read at least at a fifth grade level.

Over four months, the intervention groups received and responded to SMS messages 87 percent of the time, and the average response time was within 22 minutes. After the study, the research team analyzed patients who had follow-up visits with their physician and found that sending at least one text message a day, whether it was a question about symptoms or about asthma in general, improved clinical outcomes.

“The results indicate that both awareness and knowledge are crucial to individuals engaging in proactive behavior to improve their condition,” Arriaga says.

The paper was presented this week at the ACM SIGCHI Conference on Human Factors in Computing Systems 2013 in Paris.

In another mHealth study that highlighted the role that online social networks can have on wellness, researchers investigated whether social networking could help individuals with autism improve their social connectedness.

One of the challenges individuals with autism face is not having a large enough network of people who can provide advice about everyday situations, such as home upkeep, financial planning, or relationships. They tend to over-rely on a primary caregiver, which limits their independence and may burden the caregiver.

The study involved three individuals with Asperger’s Syndrome, a diagnosis that reflects average or above average language skills, but impaired social skills and patterns of behaviors and interests. Individuals with Asperger’s Syndrome can have difficulty using traditional social networking sites such as Facebook because it requires a degree of social nuance. They also may be vulnerable to users trying to take advantage of them.

To address this issue, researchers set up a specialized social network for participants using the commercial cross-platform service, GroupMe. Each participant was linked with a small, pre-determined number of family and friends that he or she could reach out to about everyday life issues and questions.

Over four weeks, GroupME motivated each participant to communicate with this trusted circle of members and reduce reliance on his or her primary caregiver. The circle actively engaged and shared the responsibility for responding to the participant’s queries.

Primary caregivers gave positive reviews of the specialized social network, saying that they were happy with the diversity of feedback that the system provided and that the load felt lighter thanks to the help of the circle members. Results indicate that positive online interactions lead to real-life interactions between the individuals and their circle members.

That paper will also be presented at the conference.

Many kids with autism don’t get mandated early intervention