EMORY (US) — The brain activity of teens, recorded while they are listening to new songs, may help predict a tune’s popularity.

“We have scientifically demonstrated that you can, to some extent, use neuroimaging in a group of people to predict cultural popularity,” says Gregory Berns, a neuroeconomist at Emory University.

The Journal of Consumer Psychology is publishing the results of the study, conducted by Berns and Sara Moore, an economics research specialist in his lab.

In 2006, Berns’ lab selected 120 songs from MySpace pages, all of them by relatively unknown musicians without recording contracts. Twenty-seven research subjects, aged 12 to 17, listened to the songs while their neural reactions were recorded through functional magnetic resolution imaging (fMRI). The subjects were also asked to rate each song on a scale of one to five.

The data was originally collected to study how peer pressure affects teenagers’ opinions. The experiment used relatively unknown songs to try to ensure that the teens were hearing them for the first time.

Three years later, while watching American Idol with his two young daughters, Berns realized that one of those obscure songs had become a hit, when contestant Kris Allen started singing “Apologize” by One Republic.

“I said, ‘Hey, we used that song in our study,'” Berns recalls. “It occurred to me that we had this unique data set of the brain responses of kids who listened to songs before they got popular. I started to wonder if we could have predicted that hit.”

A comparative analysis revealed that the neural data had a statistically significant prediction rate for the popularity of the songs, as measured by their sales figures from 2007 to 2010.

“It’s not quite a hit predictor,” Berns cautions, “but we did find a significant correlation between the brain responses in this group of adolescents and the number of songs that were ultimately sold.”

Previous studies have shown that a response in the brain’s reward centers, especially the orbitofrontal cortex and ventral striatum, can predict people’s individual choices—but only in those people actually receiving brain scans.

The results suggest it may be possible to use brain responses from a group of people to predict cultural phenomenon across a population—even in people who are not actually scanned.

The “accidental discovery,” as Berns describes it, has limitations. The study included only 27 subjects, and they were all teenagers, who make up only about 20 percent of music buyers.

The majority of the songs used in the study were flops, with negligible sales. And only three of the songs went on to meet the industry criteria for a certified hit: More than 500,000 unit sales, including albums that had the song as a track and digital downloads.

“When we plotted the data on a graph, we found a ‘sweet spot’ for sales of 20,000 units,” Berns says. The brain responses could predict about one-third of the songs that would eventually go on to sell more than 20,000 units. 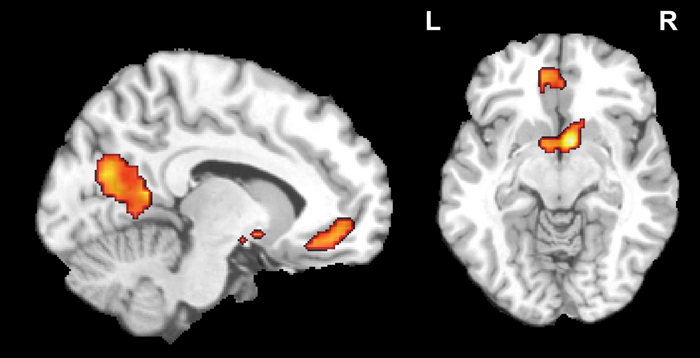 The data was even clearer for the flops: About 90 percent of the songs that drew a mostly weak response from the neural reward center of the teens went on to sell fewer than 20,000 units.

Another interesting twist: When the research subjects were asked to rate the songs on a scale of one to five, their answers did not correlate with future sales of the songs.

That result may be due to the complicated cognitive process involved in rating something, Berns theorizes. “You have to stop and think, and your thoughts may be colored by whatever biases you have, and how you feel about revealing your preferences to a researcher.”

On the other hand, “you really can’t fake the brain responses while you’re listening to the song,” he says. “That taps into a raw reaction.”