U. CHICAGO / EMORY (US) — Scientists have developed and tested a new way to precisely read the DNA alphabet, letter by letter.

Imagine reading an entire book, but then realizing your glasses did not allow you to distinguish “g” from “q”. Geneticists faced a similar problem with the recent discovery of a “sixth nucleotide” in the DNA alphabet.

Two modifications of cytosine, one of the four bases that make up DNA, look almost the same but mean different things. But scientists lacked a way of detecting precisely where these modifications are found in particular tissues or cell types.

The team used the technique to map 5-methylcytosine (5-mC) and 5-hydroxymethylcytosine (5-hmC) in DNA from human and mouse embryonic stem cells, revealing new information about their patterns of distribution. These studies have revealed that these DNA modifications play major roles in fundamental life processes such as cell differentiation, cancer and brain function.

“They regulate gene expression and have a broad impact on stem cell development, various human diseases such as cancer, and potentially on neurodegenerative disease. They may even shape the development of the human brain,” says Chuan He, professor in chemistry at Chicago. 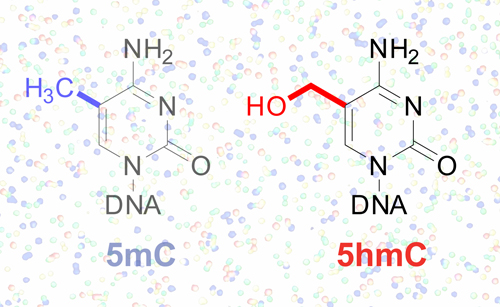 Scientists have been examining the patterns of 5-mC for decades, as part of the field of epigenetics: the study of the information that lies “on top” of the DNA sequence. However, researchers only recognized that 5-hmC was present at significant levels in our DNA a few years ago. 5-mC is generally found on genes that are turned off, and helps silence genes that aren’t supposed to be turned on.

In contrast, 5-hmC appears to be enriched on active genes, especially in brain cells. Also, defects in the Tet enzymes that convert 5-mC into 5-hmC can drive leukemia formation, hinting that changes in 5-hmC are important in cancer.

The Cell paper describes a method called TAB-Seq that directly measures 5-hmC, and presents the first map of the entire genome of 5-hmC at single-base resolution. He and three of his students conceived and developed the technique at Chicago. A patent is pending on their invention.

Researchers in epigenetics expect TAB-Seq to have a major impact on their work.

“This is a major breakthrough in that TAB-Seq allows precise mapping of all 5-hydroxymethylcytosine sites in a mammalian genome using well-established, next-generation DNA sequencing methods,” says Joseph Ecker, a professor at the Salk Institute for Biological Studies, who was not involved in the study.

“The study showed very clearly that deriving useful knowledge about this poorly understood epigenetic regulator requires determination of the exact locations of 5hmC with base-level accuracy. I expect that their new method will immediately become widely adopted.”

Previous studies had shown that 5-hmC was found on genes that are turned on. Now, the additional resolution and subsequent research on mouse and human embryonic stem cells reveals that it is found most often on the stretches of DNA that control a gene’s activity, called enhancers, in comparison with the parts of genes that are actually read out into RNA.

“We learned using this new technique that this modification is most abundant in the areas of the genome known as enhancers, which regulate the expression of genes. This potential regulatory role of hmC may explain its importance in embryonic stem cells, and why its disruption may result in the development of leukemia,” says Gary Hon, a postdoctoral fellow in the laboratory of Bing Ren, who carried out the genome-wide analysis of 5hmC in the human embryonic stem cells at the Ludwig Institute for Cancer Research at UCSD.

Another difference with 5-mC is that 5-hmC is usually on only one side of the DNA. In contrast, 5-mC is most often found symmetrically. Overall, 5-hmC is around 14 times less abundant than 5-mC. Even at sites where 5-hmC is the most abundant, it is still present at about one fifth the frequency as 5-mC, the team found using the new technique.

Previous research has found that 5-hmC is 10 times more abundant in brain than in stem cells, so it may have an especially important role there. Jin’s laboratory is using the new technique to finely map 5-hmC in the developing brain.

“To really see the kinds of functions 5-hmC can have, we need to look at how it appears and disappears over time, during processes like brain development. This technique will allow us, and other investigators, to dive in and get that information at high resolution,” says Jin, an associate professor of human genetics at Emory.

Smart diapers could tell you when baby needs changing