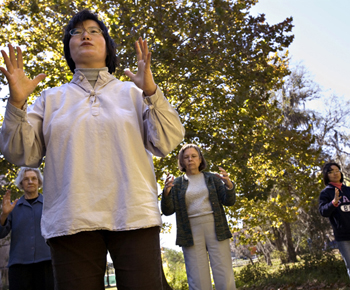 In a study of adults diagnosed with type 2 diabetes, those who participated in a supervised tai chi exercise program two days a week with three days of home practice for six months significantly lowered their fasting blood glucose levels, improved their management of the disease, and enhanced their overall quality of life, including mental health, vitality, and energy.

“Tai chi really has similar effects as other aerobic exercises on diabetic control. The difference is tai chi is a low-impact exercise, which means that it’s less stressful on the bones, joints and muscles than more strenuous exercise,” says Beverly Roberts, the Annabel Davis Jenks endowed professor at the University of Florida.

About 23.6 million children and adults in the United States, or 7.8 percent of the population, have diabetes. It occurs when the body does not produce or properly use insulin, a hormone that is needed to convert sugar, starches, and other food into energy needed for daily life.

Risk factors include obesity, sedentary lifestyle, unhealthy eating habits, high blood pressure and cholesterol, a history of gestational diabetes, and increased age, many of which can be reduced through exercise.

“People assume that for exercise to be beneficial you have to be huffing and puffing, sweating and red-faced afterward,” Roberts says. “This may turn people off, particularly older adults. However, we have found that activities like tai chi can be just as beneficial in improving health.”

“Those who participated in the tai chi sessions actually had lower blood glucose at three and six months,” Roberts notes. “Those individuals also had lower hemoglobin A1c, which means they had better diabetic control.”

Tai chi has also been used for people with arthritis and disabilities to increase balance, muscle strength and mobility and to reduce the risk of falls. It is worth investigating its effects in other conditions, especially in older people, Roberts said.

“Tai chi provides a great alternative for people who may want the benefits of exercise on diabetic control but may be physically unable to complete strenuous activities due to age, condition or injury,” Roberts says. “Future studies could examine if tai chi could similarly benefit conditions such as osteoporosis or heart disease.”

Since tai chi is an exercise that involves so many parts of the body and also helps to relax the mind, it is more likely participants will adhere to the exercise, says Paul Lam, a lecturer with the University of South Wales School of Public Health and Community Medicine and a practicing family physician in Sydney, Australia.

“This study shows that tai chi can have a significant effect on the management and treatment of diabetes—a significant and growing health challenge for all Western countries,” Lam adds.

The research was featured in the Journal of Alternative and Complementary Medicine.

How dementia caregivers can cope with the holidays

To avoid the health effects of stress, get proactive