DUKE (US) — When exposed to underwater sounds like those during US military exercises, blue whales may change their behavior, diving away from important feeding areas. 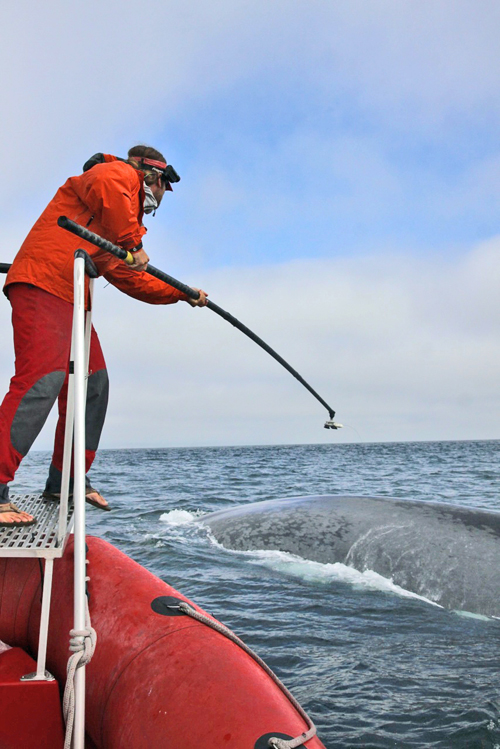 Ari Friedlaender attaching a suction-cup tag to the back of a blue whale off the coast of southern California. (Credit: Ari Friedlaender; NMFS Permit 14534)

“But overall the responses are complex and depend on a number of interacting factors,” including whether the whales were feeding deep, shallow, or not at all.

The scientists tagged the whales with non-invasive suction cups, which recorded acoustic data and high-resolution movements as the animals were exposed to the controlled sounds.

“The tag technology we use offers a unique glimpse into the underwater behavior of whales that otherwise would not be possible,” says Ari Friedlaender, a research scientist at the Duke University Marine Laboratory.

Some of the whales engaged in deep feeding stopped eating and either sped up or moved away from the source of the noise. Not all of the whales responded to the noise, and not all in the same way.

“Blue whales are the largest animals that have ever lived. Populations globally remain at a fraction of their former numbers prior to whaling, and they appear regularly off the southern California coast, where they feed,” says John Calambokidis, one of the project’s lead investigators of Cascadia Research.

That area of the ocean is also the site of military training and testing exercises that involve loud mid-frequency sonar signals. Such sonar exercises have been associated with several unusual strandings of other marine mammal species (typically beaked whales) in the past.

Until this study, published in Proceedings of the Royal Society B, almost no information was available about whether and how blue whales respond to sonar.

“These are the first direct measurements of individual responses for any baleen whale species to these kinds of mid-frequency sonar signals,” says Brandon Southall, SOCAL-BRS chief scientist from SEA, Inc., and an adjunct researcher at both Duke and the University of California Santa Cruz.

“These findings help us understand risks to these animals from human sound and inform timely conservation and management decisions.”

A related paper published July 3 by the same research team in Biology Letters has shown clear and even stronger responses of Cuvier’s beaked whales to simulated mid-frequency sonar exposures. Beaked whales showed a variety of responses to both real, military sonar in the distance and nearby simulated sonar. What the beaked whales were doing at the time appeared to be a key factor affecting their reactions.

The US Navy Chief of Naval Operations Environmental Readiness Division and the US Office of Naval Research funded the study.

Footprint ‘reading’ tech is a new way to protect rhinos

Jupiter’s moons may keep each other toasty