"This is an important discovery because some of these rarer native breeds of chicken with this unusual egg color and high quality have become low in number and are in danger of disappearing," Olivier Hanotte. (Credit: Rodrigo Benavides/Flickr)

Scientists have identified the genetic mutation responsible for the first blue chicken eggs in South American Mapuche fowl and their European descendants, Araucana, 200 to 500 years ago.

The results, published in PLOS ONE, could inform future research into agricultural breeding techniques if demand grows for the blue eggs, which some say taste better and look cleaner than brown eggs.

The scientists used the unique genetic resources conserved by heritage or “fancy” poultry breeders to identify at fine resolution the exact location of the mutation in the genome in blue egg laying chickens.

An additional genomic study then revealed the genetic cause of the blue colored eggshell—a surprisingly harmless ancient retrovirus in the domestic chicken. 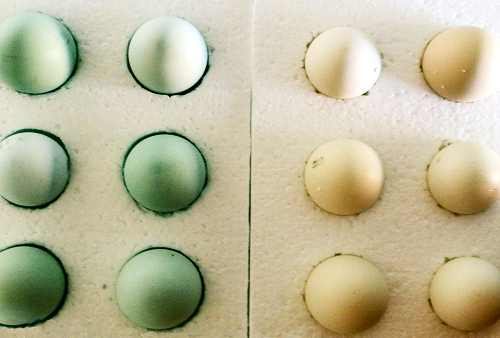 “It’s quite remarkable—retroviruses are generally considered to integrate at random locations in the genome,” says doctoral research fellow David Wragg, “and so the chance of a retrovirus integrating at more or less the same location in two chicken populations is extremely low.” (Credit: sammydavisdog/Flickr)

A retrovirus is a virus that, unlike most cellular organisms, carries its genetic blueprint in the form of ribonucleic acid (RNA). It reproduces itself in a host cell using a special enzyme called “reverse transcriptase” which transcribes RNA into deoxyribonucleic acid (DNA).

This makes it possible for genetic material from a retrovirus to become permanently incorporated into the DNA of an infected cell. In this case, the retrovirus’ effect was to trigger an accumulation of a green-blue bile pigment called biliverdin in the eggshell as the egg develops in the hen.

“An unexpected find was the unique integration sites for the retrovirus in South American/European and Asian chickens,” says team leader David Wragg, a doctoral research fellow at University of Nottingham.

“It shows the importance of viruses in shaping evolution and diversity of species. It’s quite remarkable—retroviruses are generally considered to integrate at random locations in the genome, and so the chance of a retrovirus integrating at more or less the same location in two chicken populations is extremely low.

“Moreover, when appearing in the population, the unusual egg coloration must have attracted the attention of the owners, who must be praised for having selected the trait in subsequent breeding.”

Co-researcher Joram Mwacharo adds: “Of course it’s not only some breeds of chicken that produce blue eggs. They are commonly found across species of birds including those that lay blue eggs as well as non-blue eggs within a single population, like the cuckoo and guillemot.

“It’s therefore entirely possible that retroviruses could be playing a part in the diversity of egg color and patterning across avian species more generally, but this remains to be studied.”

Professor Olivier Hanotte initiated the work after becoming curious about blue eggs on a trip to Brazil, where he met Professor José Antonio Alcalde, a co-author of the paper.

“This is an important discovery because some of these rarer native breeds of chicken with this unusual egg color and high quality have become low in number and are in danger of disappearing if not conserved and indeed promoted by agriculture,” says Hanotte.

A research group in China independently discovered and reported the same findings with local Chinese and North American breeds.