“The beautiful thing about math and physics is that it is not subjective,” says Garibaldi of Emory University. “I wanted a peer-reviewed paper published, so that the scientific literature provides an accurate state of affairs, to help clear up confusion among the lay public on this topic.” 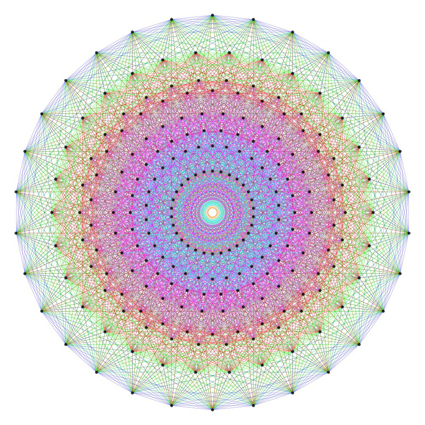 Released in November 2007, Lisi’s paper titled “An Exceptionally Simple Theory of Everything,” centered on the elegant mathematical structure known as E8, that also appears in string theory.

Lisi spent much of his time surfing in Hawaii, adding an alluring bit of color to the story surrounding the theory. Although his paper was not peer-reviewed, and Lisi himself told the Daily Telegraph that the theory was still in development, the idea was widely reported in the media.

First identified in 1887, E8 has 248 dimensions and cannot be seen, or even drawn, in its complete form. The enigmatic E8 is the largest and most complicated of the five exceptional Lie groups, and contains four subgroups that are related to the four fundamental forces of nature: the electromagnetic force, the strong force (which binds quarks), the weak force (which controls radioactive decay), and the gravitational force.

Garibaldi was among the skeptics when the theory hit the news. So was Jacques Distler, a particle physicist at the University of Texas, who wrote about problems he saw with Lisi’s idea on his blog. Distler’s posting inspired Garibaldi to think about the issue more, eventually leading to their collaboration.

In a nutshell, Lisi proposed that E8 is the unifying force for all the forces of the universe.

“That would be great if it were true, because I love E8,” Garibaldi says. “But the problem is, it doesn’t work as he described it in his paper.”

Garibaldi and Distler’s paper appears in Communications in Mathematical Physics.

“A lot of mystery surrounds the Lie groups, but the facts about them should not be distorted,” Garibaldi says. “These are natural objects that are central to mathematics, so it’s important to have a correct understanding of them.”

Using linear algebra and proving theorems to translate the physics into math, Garibaldi and Distler not only showed that the formulas proposed in Lisi’s paper do not work, they also demonstrated the flaws in a whole class of related theories.

“You can think of E8 as a room, and the four subgroups related to the four fundamental forces of nature as furniture, let’s say chairs,” Garibaldi explains.

“It’s pretty easy to see that the room is big enough that you can put all four of the chairs inside it. The problem with ‘the theory of everything’ is that the way it arranges the chairs in the room makes them non-functional.”

He gives the example of one chair inverted and stacked atop another chair.

“I’m glad that I will now be able to point to a peer-reviewed scientific article that clearly rebuts this theory.

“There are so many great stories in science, there’s no reason to puff up something that doesn’t work.”

Most math textbooks get a failing grade

Why Antarctica sea ice retreats faster than it forms

Why so many LGBT+ scientists leave physics