Researchers have combed through more than two dozen studies and taken surface measurements of 27 mammals and insects to better understand how animals are able to clean themselves.

The findings could have implications for keeping structures built by humans—such as sensors, robots, and drones—free from pollutants, pollen, and dirt.

The research team focused on the many ways hair allows animals to both get dirty and remain dirt-free. The researchers found that a honeybee has the same number of hairs as a squirrel: 3 million. That’s nothing compared to butterflies and moths—each has nearly 10 billion hairs. The human head, as a comparison, has just 100,000. 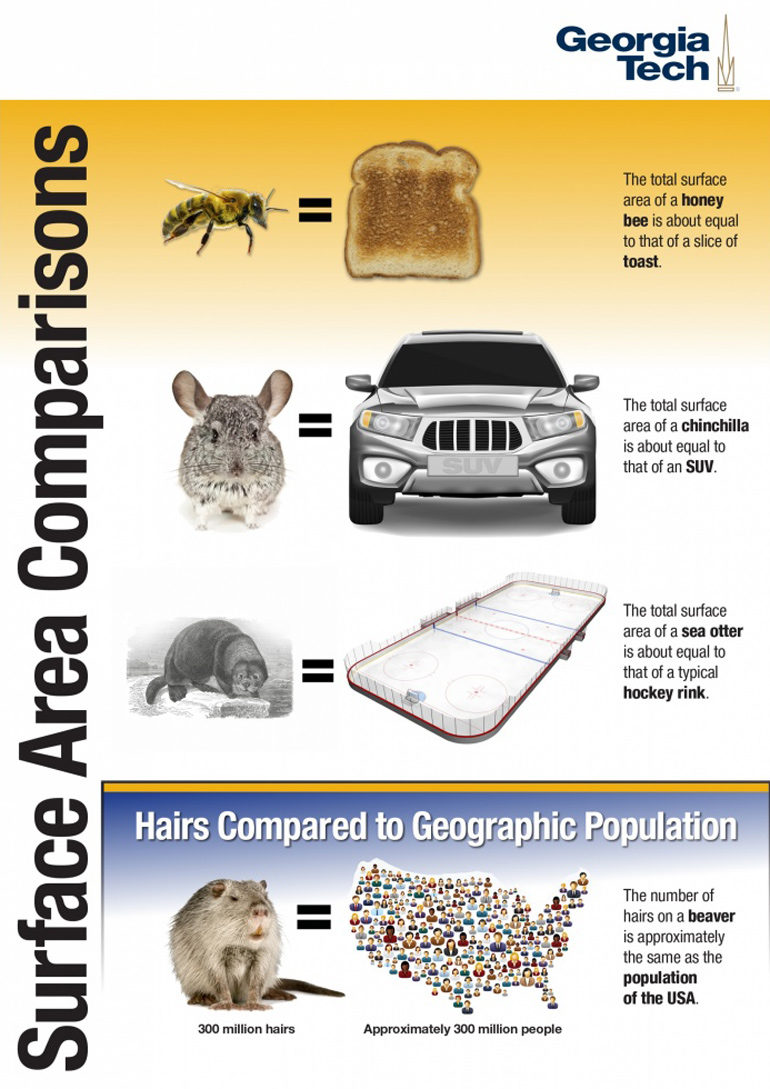 Hu and mechanical engineering PhD student Guillermo Amador ran calculations to find the true surface area of animals, or the surface area that includes every location where dirt can be collected. The hairier it is, the larger the creature’s true surface area. In fact, the team says it’s 100 times greater than its skin surface area.

And with all that surface area comes the challenge of keeping away all the dirt. It turns out that animals use a variety of ways to stay clean. Some depend on non-renewable strategies and use their own energy.

“Dogs shake water off their backs, just like a washing machine,” says Amador, who recently graduated. “Bees use bristled appendages to brush pollen off their eyes and bodies. Fruit flies use hairs on their head and thorax to catapult dust off of them at accelerations of up to 500 times Earth’s gravity.”

Other animals and insects use more efficient, renewable cleaning tactics.

“They don’t do anything extra to stay clean. It just happens,” says Amador.

Eyelashes, for example, protect mammals by minimizing airflow and funneling particles away from eyes. Cicadas have sharp points on their wings that act as pincushions, essentially popping airborne bacteria like water balloons.

It’s these renewable cleaning tactics that have the team thinking about applications for technology.

“Understanding how biological systems, like eyelashes, prevent soiling by interacting with the environment can help inspire low-energy solutions for keeping sensitive equipment free from dust and dirt,” says Hu.

“Drones and other autonomous rovers, including our machines on Mars, are susceptible to failure because of the accumulation of airborne particles.”

The review study appears in the Journal of Experimental Biology.

Flies can smell the motion of odors

Termite kings and queens are awesome parents, and then retire