RUTGERS (US) — A team of experts created a massive virtual supercomputer cloud capable of easily solving the toughest computing tasks. And they can operate it from an iPad.

“We demonstrated how to build ‘federated clouds,’” says Manish Parashar, professor of electrical and computer engineering at Rutgers. The effort involved mixing and matching multiple computing resources, integrating them into a virtual ‘cloud’ that operated as a single large computer, and disbanding resources when they were no longer needed.

“Our goal is to make these federated, high-performance computing clouds more useful to industry,” he says.

Until now, using supercomputing to solve research problems or industrial tasks required significant expertise and effort. And if a single supercomputer couldn’t provide enough power, you had to build a bigger one or link two or more together—not a trivial undertaking even for the experts.

Parashar worked with experts at IBM and the University of Texas to solve a real-world problem: how to extract as much oil as possible from an oil field.

Using the processing power in their supercomputing cloud, the team constructed a graphic representation of rock properties in an oil field, with the possibility of higher oil flow at the redder points and lower flow at the bluer points.

IBM’s Thomas Watson Research Center provided expertise and access to supercomputers and the University of Texas contributed oil industry experience through its Center for Subsurface Modeling. Rutgers applied its expertise in autonomic computing, where computers make high-level decisions to get more resources with little or no human intervention.

“Oil reservoir optimization is one of the most demanding applications in computing,” says IBM’s Kirk Jordan, a former adjunct professor of computer science at Rutgers. “Modeling the systems requires simulating complex physics and exploring large numbers of parameters.”

The team brought home first place in a contest run by the Institute of Electrical and Electronics Engineers (IEEE), known as the IEEE SCALE 2011 Challenge.

The team’s computing needs were provided by IBM “Blue Gene” supercomputers in Yorktown Heights, N.Y., but when more power was needed, the team tapped IBM supercomputers at the King Abdullah University of Science and Technology in Saudi Arabia.

And all that power was literally at their fingertips – the engineers ran their demonstration through a hand-held Apple iPad tablet computer.

“Accessing such a large supercomputer configuration from an iPad to easily run a complex application makes supercomputing much more accessible to scientists and engineers,” says Moustafa AbdelBaky, a Rutgers graduate student who presented the demonstration at the conference. 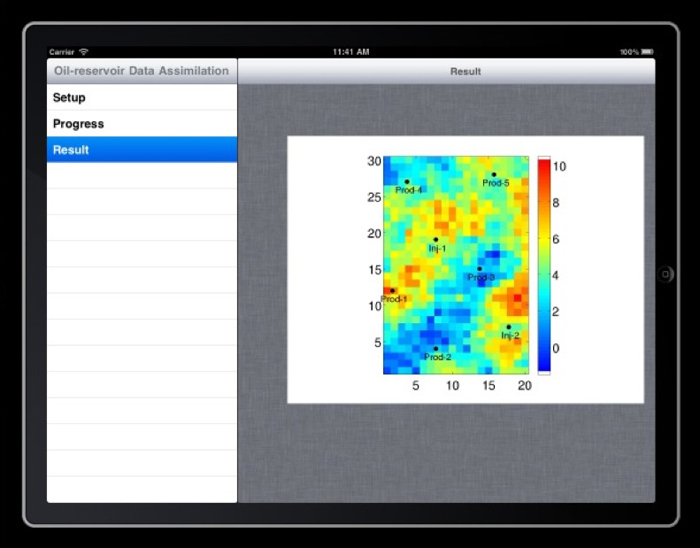 Using the processing power in their supercomputing cloud, the team constructed a graphic representation of rock properties in an oil field, with the possibility of higher oil flow at the redder points and lower flow at the bluer points. (Credit: Gergina Pencheva, University of Texas)

Toddlers can use iPads by age two