UC DAVIS (US) — In shallow water, even small oil spills can have a significant effect on marine life, according to new research that indicates common chemical analyses of oil spills may be inadequate.

The 2007 Cosco Busan disaster, which spilled 54,000 gallons of oil into the San Francisco Bay, had an unexpectedly lethal impact on embryonic fish, devastating a commercially and ecologically important species for nearly two years.

“Our research represents a change in the paradigm for oil spill research and detecting oil spill effects in an urbanized estuary,” says Gary Cherr, director of the Bodega Marine Laboratory at the University of California, Davis and a study co-author. 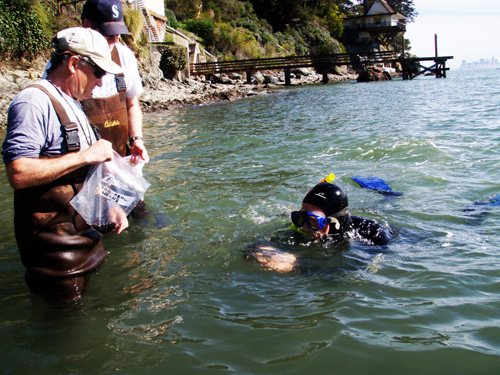 “Based on our previous understanding of the effects of oil on embryonic fish, we didn’t think there was enough oil from the Cosco Busan spill to cause this much damage,” says Gary Cherr. (Credit: UC Davis)

On the foggy morning of Nov. 7, 2007, when the container ship collided with the San Francisco-Oakland Bay Bridge, bunker oil contaminated spawning habitats for the largest U.S. coastal population of Pacific herring—a month before spawning season.

The new study, published in Proceedings of the National Academy of Sciences, analyzes Pacific herring embryos following the spill, highlights the effects of bunker oil on fish embryos in shallow water, the potential significance of sunlight interacting with oil compounds, and the extreme vulnerability of fish in early life stages to spilled oil.

Specifically, the study found that components of the Cosco Busan bunker oil accumulated in naturally spawned herring embryos, then interacted with sunlight during low tides to kill the embryos. Laboratory-fertilized eggs, caged in deeper waters, were protected from the lethal combination of sunlight and oil, but still showed less severe abnormalities associated with oil exposure.

The study builds on research following the 1989 Exxon Valdez spill, which released up to 32 million gallons of crude oil into the comparatively pristine environment of Prince William Sound, Alaska. That research established a new paradigm for understanding the effects of oil toxicity on fish at early life stages.

The new study suggests that this old paradigm is inadequate to explain the dramatic, lethal effects of very low levels of oil on fish embryos, even in an urban estuary with preexisting background pollution.

“Based on our previous understanding of the effects of oil on embryonic fish, we didn’t think there was enough oil from the Cosco Busan spill to cause this much damage,” Cherr says. “And we didn’t expect that the ultraviolet light would dramatically increase toxicity in the actual environment, as we might observe in controlled laboratory experiments.”

Researchers began the new study in February 2008, analyzing levels of oil-based compounds in caged herring embryos at four oiled and two non-oiled subtidal sites, all of which were at least 1 meter below the water’s surface. Naturally spawned embryos from shallower sites were also analyzed.

“These embryos were literally falling apart with high rates of mortality,” Cherr says.

In 2008, almost no live larvae hatched from the natural spawn collected from oiled sites. The high death rates did not seem to be caused by natural or manmade causes unrelated to the spill, the researchers report. No toxicity was observed in embryos from unoiled sites, even those near major highways.

Pacific herring is a commercially and ecologically important species. The fish travel in large schools, typically from the San Francisco Bay north to the Bering Sea, and serve as a forage fish for humpback whales, other mammals, birds and salmon. After two years at sea, they spawn in shallow areas of bays and estuaries.

“In San Francisco, herring is one of the last urban fisheries, and herring is an indicator for the health of the Bay,” says Cherr.

The National Oceanic and Atmospheric Administration contributed to the study that was funded by the California Department of Fish and Game.

Pacific salmon are safer but hungrier in big groups